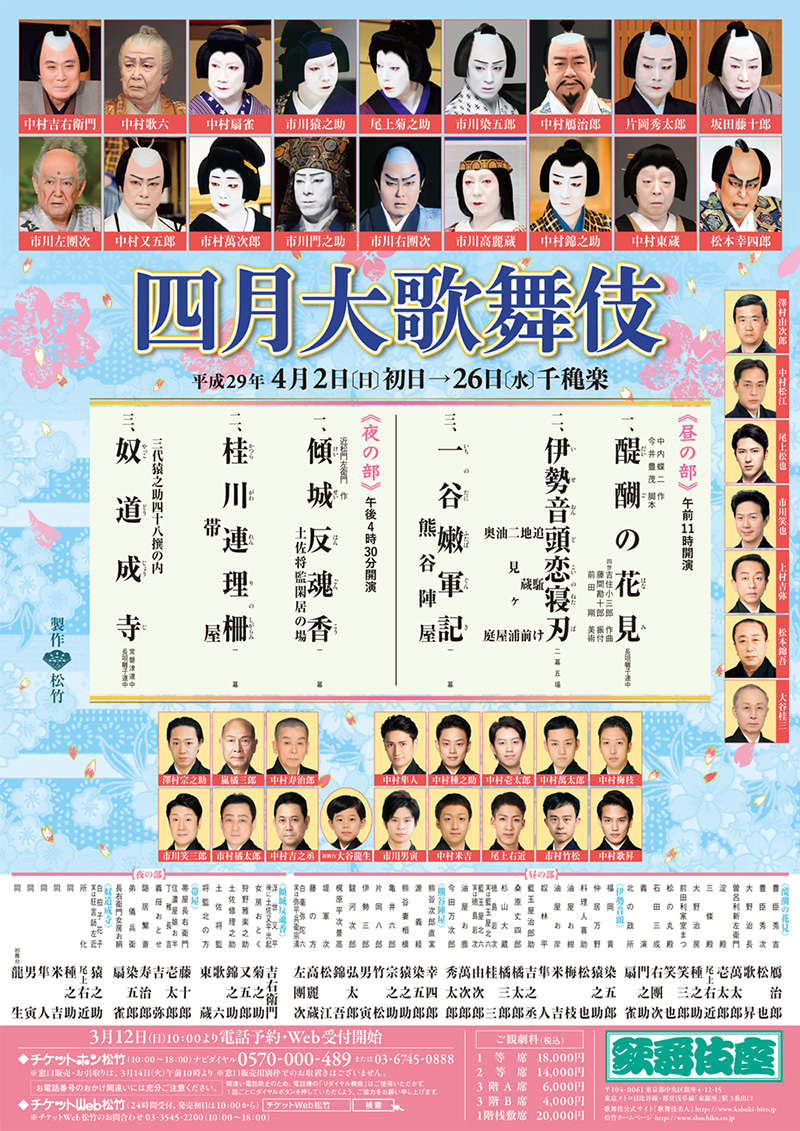 This is a dance portraying the famous blossom-viewing party held by the warlord Toyotomi Hideyoshi in the 3rd lunar month of 1598 in the garden of Daigo-ji Temple in Kyoto.
It was a grand banquet to which Hideyoshi's family, many daimyō lords, their wives and retainers were invited.

This is a sewamono play, a drama portraying in a realistic way the lives of ordinary people in the Edo period. It was based on a true incident involving a sword that occurred in a brothel in Furuichi, near the Grand Shrine of Ise.
In Awa Province (present day Tokushima Prefecture) the lord's uncle Hachisuka Daigaku is plotting to take over the Hachisuka clan. As the head retainer Imada Kuroemon who enjoys the lord's confidence is in his way, he tries to bring Kuroemon down by stealing the heirloom sword Aoe Shimosaka and laying the blame for its loss on Kuroemon's son Manjirō.
Manjirō goes to Ise to investigate the theft and to clear himself of losing the heirloom which at last he finds. Enticed by the henchmen of Daigaku's retainer Tokushima Iwaji, Manjirō pays frequent visits to the courtesan Okishi of the Furuichi pleasure quarter. Having no more money to visit her, he pawns the Shimosaka sword, the certificate for which is taken away through deception by Iwaji's faction.
Fukuoka Mitsugi, a lowly acolyte in Ise who serves the Imada clan, intercepts a secret letter from Daigaku to Tokuji. He recovers the sword and comes to the Aburaya brothel to regain the certificate from Iwaji. In order to get the certificate for him, Mitsugi's lover Okon pretends that she no longer loves Mitsugi and that she has fallen for Iwaji instead. Not knowing Okon's true feelings, Mitsugi becomes distraught and slays many of the people in the brothel, driven on by the mysterious power of the sword Shimosaka

From [The Chronicles of the Battle of Ichinotani]
[Kumagai's Battle Camp]

This is a play based on episodes from the battle of Ichinotani, one of the climactic struggles between the Heike and Genji clans in 12th century. At this battle, the Genji warrior Kumagai Naozane attacks Taira no Atsumori, the illegitimate child of former Emperor Goshirakawa. Naozane comes back to his battle camp and shows the severed head of Atsumori to his lord Minamoto no Yoshitsune. However, the head is in reality that of Naozane's own son. Yoshitsune gave Naozane a chance to spare Atsumori because he is the son of the former Emperor, and because Naozane is indebted to Atsumori's mother. Therefore, Yoshitsune suggested to Naozane indirectly that he sacrifice his son as a substitute for Atsumori. After doing so, and feeling the transience of our existence, Naozane rejects the life of a warrior to become a Buddhist priest.

A scene from Chikamatsu Monzaemon's "Keisei Hangonkō" which was originally written for the puppet theatre and adapted as kabuki.
Matahei has long studied painting, but because of his stutter, his master has refused to give him an artistic name. Instead of being a respected artist, Matahei is forced to make a living drawing crude cartoons. Matahei and his wife come to beg his teacher for a name once more, Matahei's wife chattering to make up for her husband's silence. But when their request is turned down, husband and wife decide that suicide is the only choice. Before dying, Matahei paints his portrait on a stone washbasin, and such is the strength of his spirit that the painting goes through the stone and appears on the other side. Finally Matahei receives a name and is overjoyed to be able to serve his teacher with valor.

This is a sewamono play, a play portraying in a realistic way the lives of ordinary people in the Edo period.
One of the most famous love stories in kabuki and bunraku is the love of the young maiden Ohan for her middle-aged neighbor Chōemon, finally culminating in a love suicide between the two. Chōemon is the proprietor of the Obiya. Though his wife is very understanding, the pressures of his family and the lustful jealousy of the boy apprentice next door finally drives Chōemon and Ohan together. This eventually leads to tragedy.

This dance is a parody of the famous work 'Musume Dōjōji', 'The Maiden at Dōjōji'.
'Musume Dōjōji' is based on a legend about a woman who transformed into a serpent out of jealousy and who destroyed a temple bell that was keeping her from the object of her love. The original piece shows the spirit of the woman transformed into a beautiful dancer who wants to celebrate the dedication of a new temple bell. She performs a series of dances for the priests showing the many faces of femininity. In this version, the dancer is revealed to be a man in disguise and, in the highlight of the dance, transforms the romantic highpoint of the original piece into a comic scene by using masks.