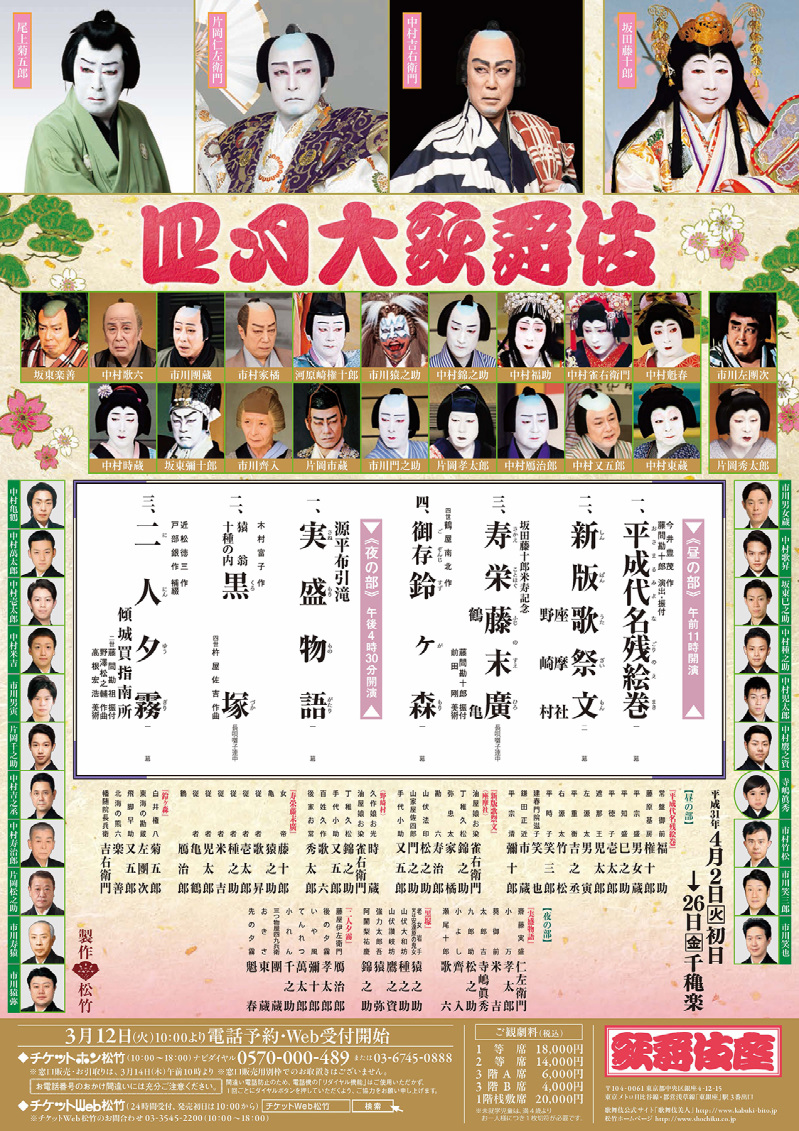 The first work to be performed in the Matinee celebrates the current Emperor's reign in the Heisei era. An auspicious dance to celebrate Sakata Tōjūrō’s 88 years of age and two typical Kabuki plays will also be performed in the Matinee. The Evening Show includes a popular history play, an impressive dance play and a beautiful sewamono, a play depicting the lives of ordinary people in the Edo period which is full of highlights. Enjoy viewing cherry blossoms and kabuki in Japan.
The April program at the Kabukiza Theatre (Tokyo) has begun!

This is a brand-new play commemorating the end of the Heisei era.
Set during the time when the Genji and the Heike clans were at war, the people of both clans appear one after another. The first will be Lady Tokiwa, mother of Minamoto no Yoshitsune, together with the Heike warrior Taira no Munekiyo. They grasp the white banner of the Genji clan.

Hisamatsu is an apprentice at the Aburaya and becomes intimate with Osome, the daughter of the pawnbroker. As he meets Osome at the Zama Shrine, he is swindled out of the money he collected from the shop's customer and is falsely accused of embezzling it by Kosuke, a sales clerk of the Aburaya. By this accident, Hisamatsu was brought back to Kyūsaku's house where Hisamatsu grew as an adopted child. Kyūsaku's daughter Omitsu rejoices to hear that Kyūsaku intends to unite her with Hisamatsu. When Osome visits this place, Omitsu learns that Osome and Hisamatsu are determined to commit lovers' double suicide...

This is a dance celebrating Sakata Tōjūrō's 88th birthday performed by himself, his son and his grandson.
The Empress appears in the palace at the time of the spring festival. A crane and a tortoise dance in front of her to celebrate longevity; the crane is believed to live for 1,000 years while the tortoise is said to live for 10,000 years.

This is a jidaimono history play set at the end of the Heian Period (12th century).
The play's subject concerns the early days of the rivalry between the Genji and the Heike military clans. Lady Aoi, widow of the Genji clan's leader, is pregnant and is in hiding at the house of Kurosuke, a fisherman. Sanemori, a warrior who was once of the Genji clan but has now joined the Heike, comes to Kurosuke's house with the Heike warrior Senoo. Should Lady Aoi's child be a boy, it could become the future head of the Genji clan, and so Sanemori is ordered to kill the baby if it is indeed male. But to everyone's surprise, the 'baby' turns out to be a woman's severed arm. Seno'o is amazed, but Sanemori assures him that there is a similar event in history. The highlight of this play is when Sanemori recounts how he severed the woman's arm.

[ 'The Black Mound on Adachi Plain', one of the 10 Masterpieces of Ichikawa En'ō ]

A woman has grown bitter at the world after being rejected by her husband and now lives in seclusion on the wild moors of Adachi Plain. Having become a kind of demon, she kills and devours passing travelers. However, when she gives shelter to a holy man and his party, she rejoices at this opportunity to find salvation. Going off to find firewood, she seeks absolution under the full moon. However, while she is away the porter in the holy man's party looks in her back room where he finds the bodies of her victims, and they all leave in a panic. The old woman is furious at being betrayed and this transforms her into a demon, which is finally vanquished by the power of the holy man.

Izaemon, the son of a wealthy merchant in Osaka, fell in love with a courtesan named Yūgiri and was disowned by his parents. Now, Izaemon lives with the second Yūgiri after hearing that the first Yūgiri had died. He makes a meager living by teaching his pupils how to entertain themselves in the pleasure quarters. However, the first Yūgiri was not dead but had hidden herself so as not to be ransomed by a man whom she disliked. The first Yūgiri and the second Yūgiri begin to quarrel, but Okisa, the proprietress of the Yoshidaya mediates between them and the news comes that Izaemon is allowed to return home. He decides to live happily with both Yūgiris.