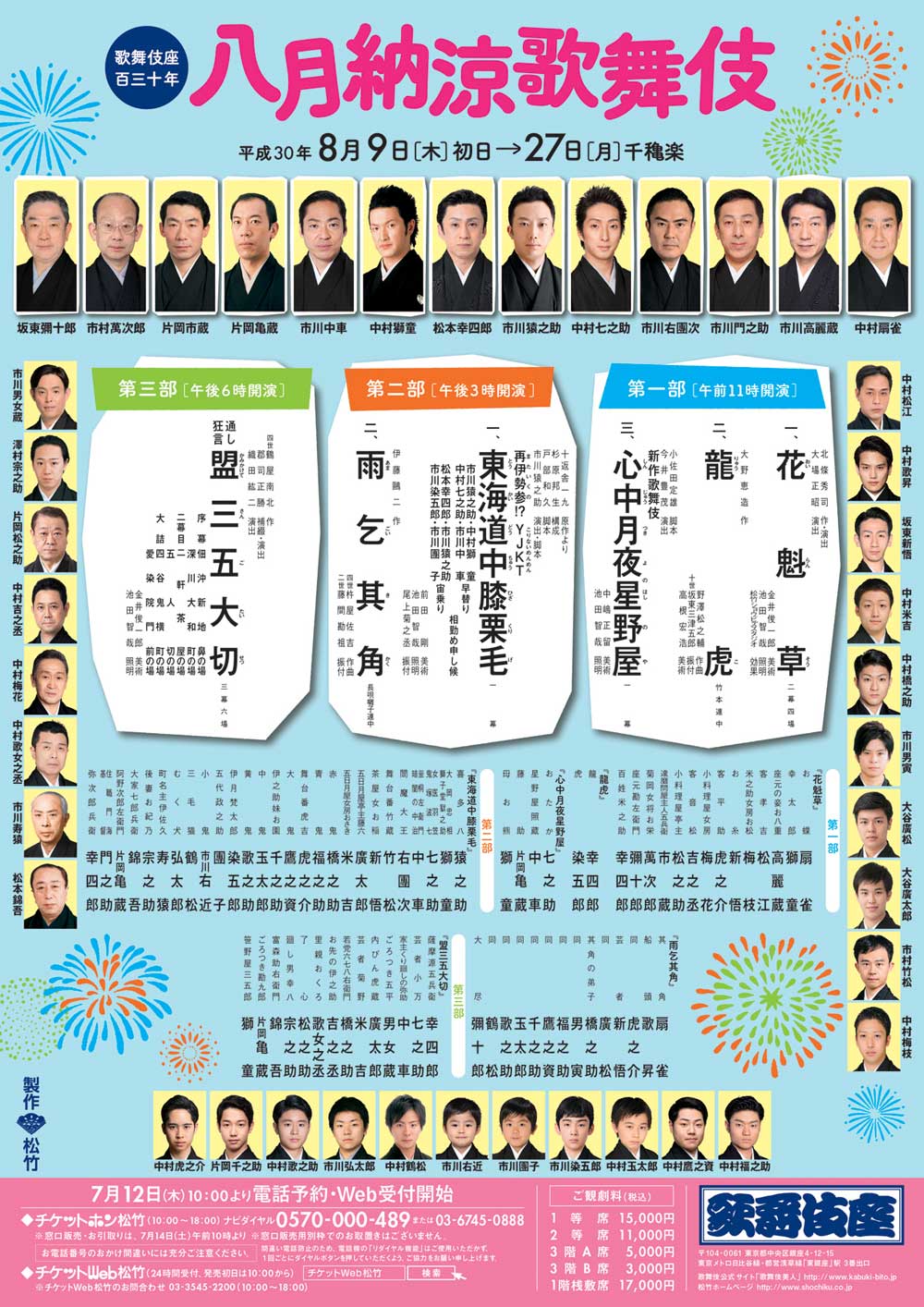 The year 2018 is the 130th year since the opening of the Kabukiza Theatre.
This month’s performances are divided into three parts and feature some of the most talented stars in kabuki today.
In Part 1, you can see a story about the self-sacrifice of a prostitute, an energetic dance and a new production adapted from a ‘rakugo’ comic story. In Part 2, you can see the third work in a series of popular plays first staged in 2016 and a dance featuring a large group of actors. Finally, in Part 3, you can enjoy the full-length performance of a masterpiece by Tsuruya Nanboku IV.
Compared to most other kabuki programs, the length of each part is shorter and the ticket prices are very reasonable. These programs are perfect for tourists and customers who have never seen kabuki before.

[ The Tragic Love between Ochō and Kōtarō ]

This is a modern play by Hōjō Hideji.
It portrays an apprentice kabuki-actor and a low-grade prostitute from the Yoshiwara Pleasure Quarters who happen to meet after escaping the massive earthquake. Now that they are both refugees, they go to the countryside and begin living together. A year passes, and despite the fact that they have fallen in love with each other, the prostitute, Ochō, does not dare to marry the young man, Kōtarō, for she once killed a man out of jealousy. But Ochō knows that the young man, Kōtarō, will not leave her and so she agrees to return to Edo with him so that he can pursue his career as an actor.
Six years later, while Kōtarō has become a great success, Ochō has left him to go back to the country. When Kōtarō makes a tour of the provinces he searches for Ochō, but never notices the lone figure of a woman weeping on her own.

[ The Eternal Struggle between the Dragon and the Tiger ]

[ The Love Suicides of Hoshinoya ]

This is a newly written play adapted from a Rakugo story.
Teruzō has lost his money in a speculative venture. He and his concubine Otaka promise to commit 'shinjū', 'lovers' double suicide', but when the time comes he alone jumps into the river and she returns home as her mother recommended. Later, Tōsuke tells her that Teruzō's ghost appeared warning that he will haunt her. Terrified, she takes the tonsure and becomes a nun, after which Teruzō himself reappears. The double suicide was Teruzō's test of her sincerity.

'Tōkai Dōchū Hizakurige', also known as 'Yaji-Kita' after its two main protagonists Yajirobē and Kitahachi, is a famous comic novel written in the Edo period. It has often been adapted as kabuki and has always been a popular and humorous story reflecting the contemporary topics of the age. This is the third work in a series of popular plays first staged in 2016.
Many incidents happened to them along the great Tōkaidō Highway as they were heading from Edo city to the Ise Shrine. Once, Yaji and Kita were blown all the way to Las Vegas by a whale. Somehow, they got back to Edo city and then worked as black-robed stagehands at the Kabukiza. There they even solved a murder case in the theatre, but they blundered onto the stage again and again and, as ever, were scolded.
Now, once more, they set off on a journey through Japan for the Ise Shrine, but what will happen to them this time?!

This dance is based on an episode from the 17th century.
The celebrated poet Kikaku holds a poetry meeting with his pupils on a boat. He composes a poem praying for rain for the farmers who are now suffering from a drought. Heavy rain falls at once and the farmers dance for joy.

This is a ‘sewamono’, a category of plays portraying the lives of ordinary people in the Edo period (1603-1868).
Sasanoya Sangorō is married to Koman, but she has become a geisha to enable him to raise the money he needs to help his lord, a man that he has never seen. In the pleasure quarters, the samurai Satsuma Gengobē falls in love with Koman and spends huge sums of money on her, despite the fact that he needs money for the sake of the ‘Chūshingura’ vendetta (better known as the ‘Revenge of the 47 Rōnin’). Finally, Gengobē brings a large sum of money to the pleasure quarters and Sangorō and Koman decide to defraud him of it, which results in a massacre. Ironically, however, Gengobē is none other than the unknown master for whom Sangorō was trying to raise funds.
This story of passion and greed takes place against the background of inexplicable fate and the strict requirements of samurai society, to which it adds ample doses of sardonic humor. A perfect play for our times!