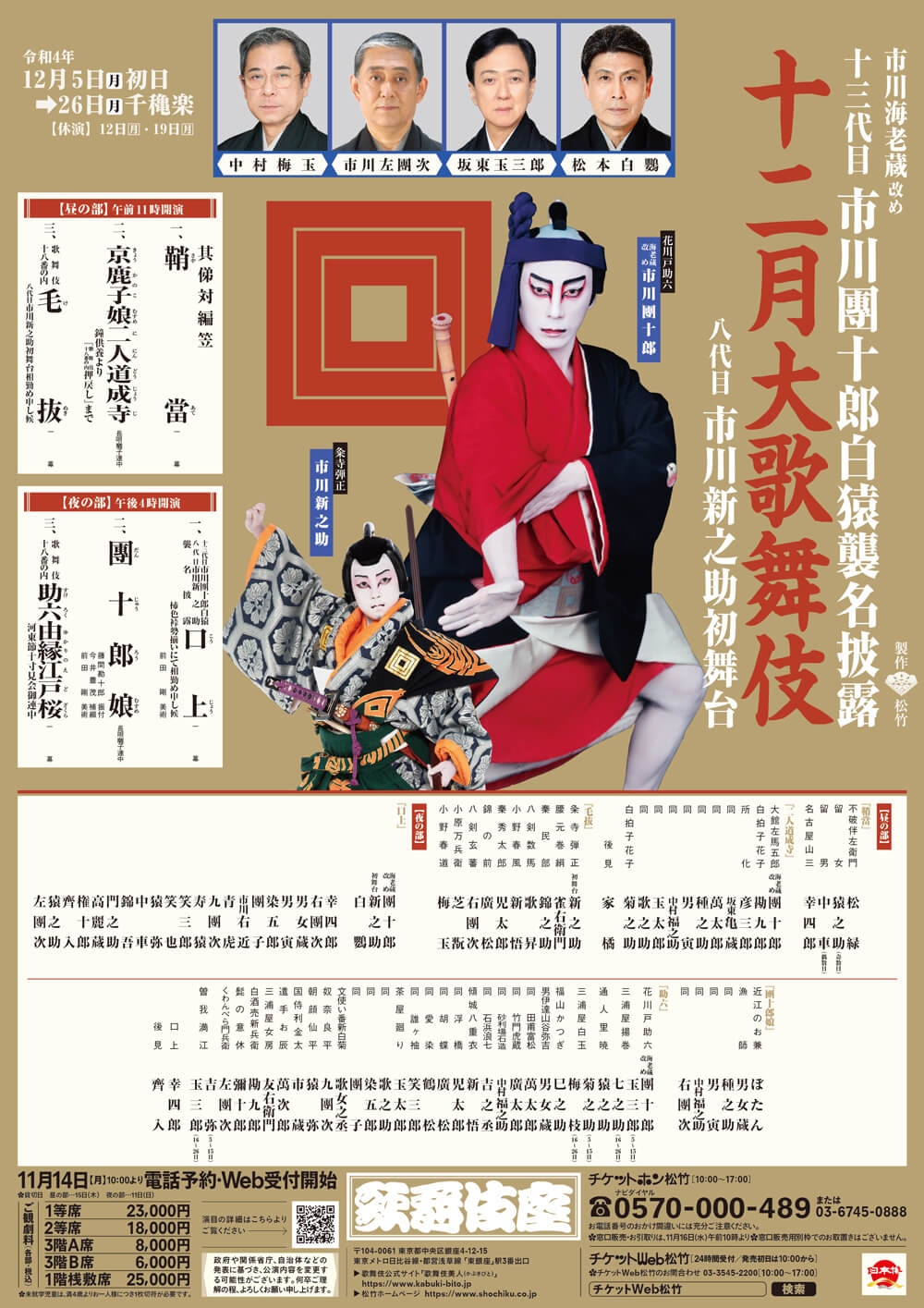 December Program at the Kabukiza Theatre

【Performances Announced】The performances for the name succession of Ichikawa Danjūrō XIII, Hakuen and Ichikawa Shinnosuke VIII have been announced.

'The name succession of Ichikawa Danjūrō XIII, Hakuen, and the stage debut of Ichikawa Shinnosuke VIII' at the Kabukiza Theatre in November and December, 2022

*Single Act Seats are not for sale.
*Tea will not be offered at the Box Seats.

The performances celebrating the name succession of Ichikawa Danjūrō XIII will continue in December. The entire program is associated with the Danjūrō line of actors and will be performed by top-ranking actors. In the Matinee, all three of the works showcase the 'aragoto', 'rough' style of acting with which the Danjūrō line of actors is associated, while in the Evening Show you can see a stage announcement which is performed only on special occasions and ''Sukeroku'' with a different cast from that in November.

['A Fight in the Pleasure Quarters']

Two samurai are rivals in love for one of the top courtesans in the Pleasure Quarters. As they pass each other in the street, their scabbards knock together, which is considered an insult. They begin to compete with each other in a series of sarcastic, poetic and stately speeches. A play full of the color and ceremony from the most stylized age of kabuki.

This dance is a special two-person version of ''Kyōkanoko Musume Dōjōji'', a masterpiece for 'onnagata' female role specialists. It is spring and the cherry blossoms are in full bloom. Two 'shirabyōshi' court dancers who call themselves Hanko visit Dōjōji Temple where a ceremony is to be held to celebrate the installation of a new temple bell. They perform various dances in order to be permitted to see the bell. However, in reality these two are the dual spirit of Kiyohime, a maiden who once transformed into a serpent out of bitter resentment. Kiyohime had fallen in love with a priest, but shocked at her advances, he ran away to this temple and hid himself under the temple bell. Pursuing him all the way here, Kiyohime turned into a fiery serpent and burnt both the bell and the priest beneath. Now her spirit has returned in dual form to destroy the new bell. Once this pair reveals its true nature, a larger-than-life 'aragoto' hero named Ōdate Samagorō appears and vanquishes the spirit. This rarely performed epilogue is called 'Oshimodoshi' and is one of 'The Eighteen Favorite Kabuki Plays'.

A princess has a mysterious ailment that makes her hair stand on end, and this prevents her from going ahead with her long-awaited marriage. Kumedera Danjō comes from the groom's household to investigate and, when his tweezers mysteriously float up in mid-air, he discovers a secret plot. This is one of 'The Eighteen Favorite Kabuki Plays'. This collection mostly features plays with the bombastic 'aragoto' style of acting, but ''Kenuki'' is an urbane, witty detective story that unfolds in a world of fantasy. It displays the spirit of early kabuki.

And other top-ranking actors are present

The actors will appear as themselves to make a stage announcement to commemorate the name succession.

Okane was a famous strong woman living by the shores of Lake Biwa who was known for stopping a runaway horse with her bare hands. This has become a kabuki dance that combines strength and charming femininity. This dance was first performed by Ichikawa Danjūrō VII, and the title 'Danjūrō Girl' implies that Okane is a woman of great strength befitting a female role played by Ichikawa Danjūrō, the specialist in the rough or wild style of acting.

['Sukeroku, the Flower of Edo']

This is a play filled with the leisurely atmosphere of old-style kabuki in its mixture of comedy and romance. ''Sukeroku'' is a great showpiece for the top stars in kabuki. The dandy Sukeroku is the most famous patron of the Yoshiwara Pleasure Quarters, but his reputation as the lover of the highest-ranking courtesan Agemaki is matched by his argumentative nature and his tendency to pick fights. In fact, Sukeroku is the samurai Soga no Gorō in disguise and he uses the fights as an excuse to search for a lost heirloom sword. His quest takes place amidst of the colorful spectacle that is the Yoshiwara, where the processions of beautiful courtesans compete with the splendor of cherry blossoms in full bloom.