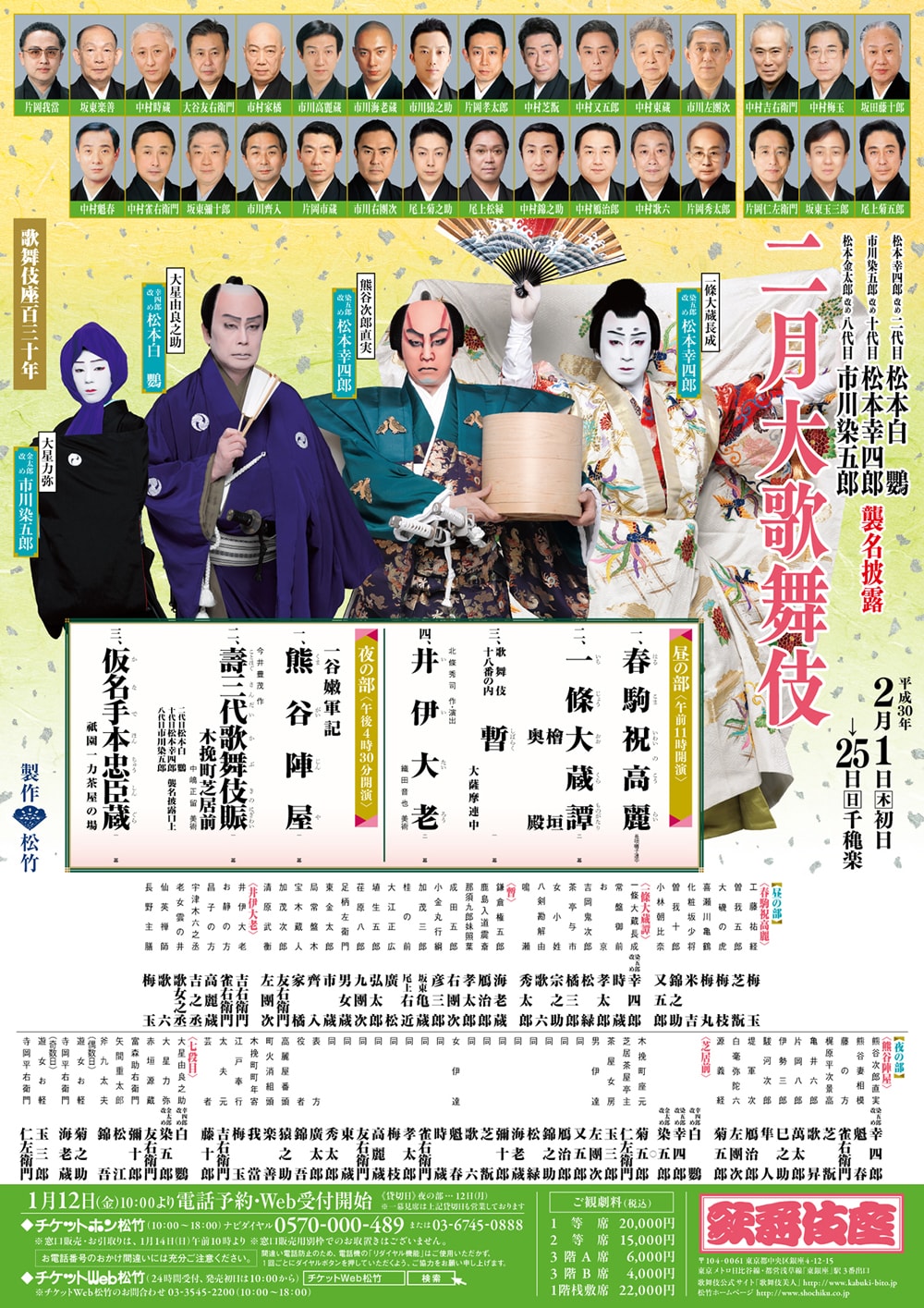 The year 2018 will be the 130th year from the opening of the Kabukiza Theatre. The build-up to the anniversary begins with the simultaneous Name Succession of three generations of the same acting family, an event that is taking place for the first time in 37 years. The actors are Matsumoto Kōshirō who will succeed to the name Matsumoto Hakuō II, Ichikawa Somegorō who will become Matsumoto Kōshirō X and Matsumoto Kintarō who will succeed to the name Ichikawa Somegorō VIII. The actors taking part and the program are no less impressive than those in January, and all will celebrate this rare simultaneous Name Succession of three generations. Enjoy these lively Name Succession performances and see how this great art is passed on.

[ The Soga Brothers with Hobbyhorses ]

This is a dance befitting the opening of this month's program that continues to celebrate the Name Succession of three generations of the 'Kōraiya' family of actors.
'Harukoma' is a performance by entertainers who used to go from door to door with a wooden horse's head in their hands to celebrate the New Year. The Soga brothers, Jūrō and Gorō, disguise themselves as entertainers and break into the mansion of Kudō Suketsune to avenge their father's death.

This play is set in the 12th century. Yoshitomo, head of the Genji clan, failed in a coup d'état against Kiyomori, leader of the rival Heike clan. After Yoshitomo's death, his widow Lady Tokiwa had no choice but to become Kiyomori's concubine in order to save the life of her sons. After that, she was married off to Lord Ichijō Ōkura Naganari who is known as a fool.
The Genji retainer Kijirō plans with his wife Okyō to infiltrate the Ōkura mansion and discover the true intentions of Lady Tokiwa.
Although they had believed that Tokiwa had given up on her clan's struggle against the enemy Heike, they are shocked to find that she secretly prays for the Heike's downfall everyday by shooting arrows at an image of the Heike leader. Yatsurugi Kageyu, one of Ōkura's retainers, discovers this. When he declares that he will tell Kiyomori about Lady Tokiwa's secret, he is killed by Ōkura. Though her current husband, the aristocrat Ōkura, seems to be nothing more than a fool, this is actually an elaborate disguise. In the days when one's political alliances could mean death, Ōkura uses his disguise to survive in this turbulent world.

More ceremony than play, Shibaraku is one of the oldest pieces in kabuki. Just as the evil villain, Takehira, is about to execute a group of loyal retainers, a voice calls out for him to wait and the hero Kamakura Gongorō appears to save the day. He enters on the 'hanamichi' runway and introduces himself in a tongue-twisting speech full of word play. The villain tries to get rid of him, but no one can match him. Gongorō reveals Takehira's wrongdoing, and beheads the villain's minions. Finally, he departs along the 'hanamichi' runway in an impressive way that demonstrates his great strength. This play features the bombastic 'aragoto' style of acting and preserves the leisurely, comic style of the earliest period of kabuki.

This is a so-called 'New Kabuki' play written by Hōjō Hideji.
Ii Naosuke was the chief councilor of the Tokugawa shogunate in 1860 at a time when there was great pressure on the government from inside and outside the country. People with different opinions thought about the future of the country seriously. Imperial loyalists demanded that the shogun step down and hand over rule to the emperor so as to resist pressure from abroad. The United States and other countries insisted that Japan open its doors. Ii Naosuke concluded a treaty with the United States, and planned to end Japan's isolation. In response, the Shogunate punished many opposition groups, including those who favored the restoration of imperial power. Ii Naosuke received criticism for this from the imperial loyalists. On March 3, at the snow-covered gate of the shogun's castle, Ii Naosuke was assassinated by imperial loyalists. This modern play features the last day before the assassination as Naosuke senses that his end is near. The deaths of an old friend and his newborn daughter make Naosuke and his mistress Oshizu think back to simpler times before he was burdened by such responsibilities.

[ The Chronicle of the Battle of Ichinotani - Kumagai's Battle Camp ]

This is a play based on episodes from the battle of Ichinotani, one of the climactic struggles between the Heike and Genji clans in the 12th century. At this battle, the Genji warrior Kumagai Naozane attacks and supposedly kills Taira no Atsumori, the illegitimate child of former Emperor Goshirakawa. Naozane comes back to his battle camp and presents the severed head of Atsumori to his lord Minamoto no Yoshitsune for inspection. In the first highlight of the play, he describes to his wife, Sagami, and to Lady Fuji, Atsumori's mother, the manner in which Atsumori died. However, the head is, in reality, that of Naozane's own son. Yoshitsune had given Naozane a chance to spare Atsumori because he was the son of the former Emperor. Therefore, Yoshitsune suggested to Naozane indirectly that he sacrifice his son as a substitute for Atsumori. In the head inspection scene, Naozane performs a famous mie pose to express his fierce determination. After this, Sagami expresses her sorrow at the loss of her son. Both these scenes are great highlights. Finally, feeling the transience of human existence, Naozane rejects the life of a warrior to become a Buddhist priest.

[ The excitement of the announcement of the name succession to Matsumoto Hakuō II,
Matsumoto Kōshirō X and Ichikawa Somegorō VIII ]

This play is what is called 'Shibai Mae' ('Before the Playhouse'): the stage is likened to a kabuki theatre in the Edo Period and a celebration ceremony such as a name succession and so on takes place in front of it.
The scene of this month's performance is laid in Kobikichō, the theatre district in Edo (the old name for Tōkyō), where the current Kabukiza Theatre stands. Top-rated actors appear as chivalrous men and chivalrous women and congratulate the actors Matsumoto Hakuō II, Matsumoto Kōshirō X and Ichikawa Somegorō VIII, three generations of actors of the Kōraiya acting house who are succeeding to those names at the same time.

[ The Treasury of Loyal Retainers -The Ichiriki Teahouse ]

'Chūshingura' is one of the most popular plays in the repertoire. It depicts a true event when forty-seven masterless samurai avenged the death of their lord by killing his enemy. Act VII is one of the most popular of the play and focuses on the leader of the vendetta, Yuranosuke. Yuranosuke must hide his intention to avenge his lord's death by pretending to be interested only in pleasure as he encounters key figures on his own side and the side of the enemy.
Yuranosuke spends his days and nights in the pleasure quarters of Kyōto in an effort to make their lord's enemy, Moronō, believe he has given up any thought of a vendetta. His pretense is so good that even men in his own group believe he has given his life up to pleasure. However, Moronō is not so easily convinced and has sent spies, including a former retainer of their late lord, Enya Hangan, to find out Yuranosuke's true intentions. Okaru, the wife of one of the retainers is now a courtesan at the Ichiriki Teahouse, unaware that her husband is dead. Without knowing that a spy lies hidden under the veranda, Yuranosuke reads a secret letter indicating his true intentions. It is read from below by the spy, but Yuranosuke realizes this thanks to Okaru. Okaru's brother Heiemon, a servant in the Enya household, also comes to the teahouse and the interaction of these characters becomes a matter of life and death. The act ends with Yuranosuke preparing to lead the vendetta.