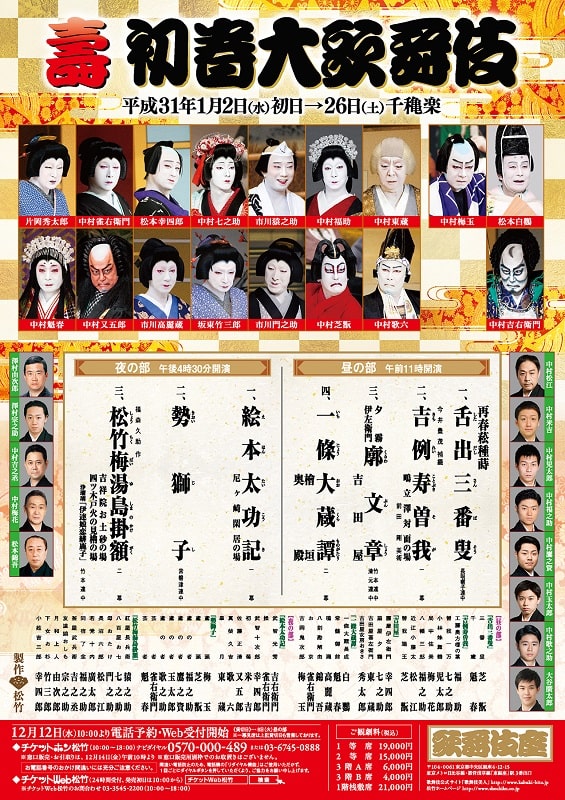 *Reserved seats for the Matinee are sold out on the 8th (Tue). (Single Act Seats will still be available.)

At this time of year when many traditional events to celebrate the New Year are held, the Kabukiza Theatre is filled with a gorgeous atmosphere and the programs are auspicious and lively. Festive dances, 'jidaimono' history plays and 'sewamono', a category of plays portraying the lives of ordinary people in the Edo period (1603-1868), will be performed both in the Matinee and the Evening Shows. It will be a very good opportunity to experience kabuki and Japanese culture.

[ The Sanbasō with his Tongue Sticking Out ]

Based on the ritual performance named 'Okina' in the Nō, Sanbasō is a vigorous dance that is also an important prayer for prosperity. There are many variations that have evolved in kabuki and as its common title suggests, it is said that this particular dance originally featured Sanbasō sticking out his tongue, an action both humorous and considered lucky.

This piece is an act of a history play based on the legend of the Soga brothers' vendetta and performed as a festive play to celebrate the New Year.
Kudō Suketsune's wife Naginoha comes to Ōiso to visit Izusan Shrine and Hakone Shrine on behalf of her busy husband. Ichiman and Hako'ō appear to avenge their father who was killed by Suketsune. Naginoha tells them to wait for the chance and gives them the pass to enter the hunting ground which Suketsune left her.

This is a dance drama portraying a scene in the pleasure quarters in Osaka at the New Year in the Edo Period.
The young lover Izaemon has been disowned by his family for loving the courtesan Yūgiri. He now has nothing but a paper kimono. He visits the Yoshidaya brothel to meet Yūgiri. It has been a long time since they last met and they have a jealous quarrel. After that, they make up, and the news comes in that Izaemon's parents have given them permission to marry.

This is a 'jidaimono' history play set in the 12th century.
The Genji retainer Kijirō and his wife Okyō believed that Lady Tokiwa, the widow of the Genji leader Yoshitomo, had given up on her clan's struggle against the enemy Heike, but they rejoice to find that she secretly prays for the Heike's downfall. Yatsurugi Kageyu, one of the retainers of her current husband, the aristocrat Ōkura, discovers this. When he declares that he will tell Kiyomori about Lady Tokiwa's secret, he is killed by Ōkura. Though Ōkura seems to be nothing more than a fool, this is actually an elaborate disguise to survive in this turbulent world.

[ 'The Retreat at Amagasaki' from 'Picture Book of the Taikō Chronicles' ]

This is a 'jidaimono' history play portraying General Akechi Mitsuhide's life after his rebellion.
Mitsuhide has killed his lord Oda Harunaga and taken over the country, but after a few days, he is in danger of losing all that he has gained to his rival general Hisayoshi. Mitsuhide intends to attack Hisayoshi with a bamboo spear, only to find that he has fatally wounded his own mother. His mother and wife reprimand him for the disloyal act of killing his lord, but he refuses to repent. His will of steel is only broken when his son arrives to report on the battle and dies from his injuries.

This dance depicts the Sannō festival in Edo (old Tokyo) with its lively lion dance and other entertainments. The festival is full of handsome firemen and attractive geisha who perform a series of graceful dances. One of the highlights of this dance is the story of the Soga brothers avenging their father's death.

This is a 'sewamono' play adapted from a real event from the 17th century.
The greengrocer's daughter Oshichi flees from the army of Minamoto no Noriyori into Kisshōin Temple in Hongō-Komagome. Oshichi loves Kichisaburō, a page of this temple, but instead her mother betrothes her to a money lender to whom they owe money.
As Noriyori sends his retainer to take her as his mistress, Beniya Chōbē hides her above the building's transom and sprinkles sand on the pursuers which softens everything.
On a snowy winter night Oshichi climbs up to the fire watchtower and beats the drum to make the gates open in order to go to Kichisaburō.