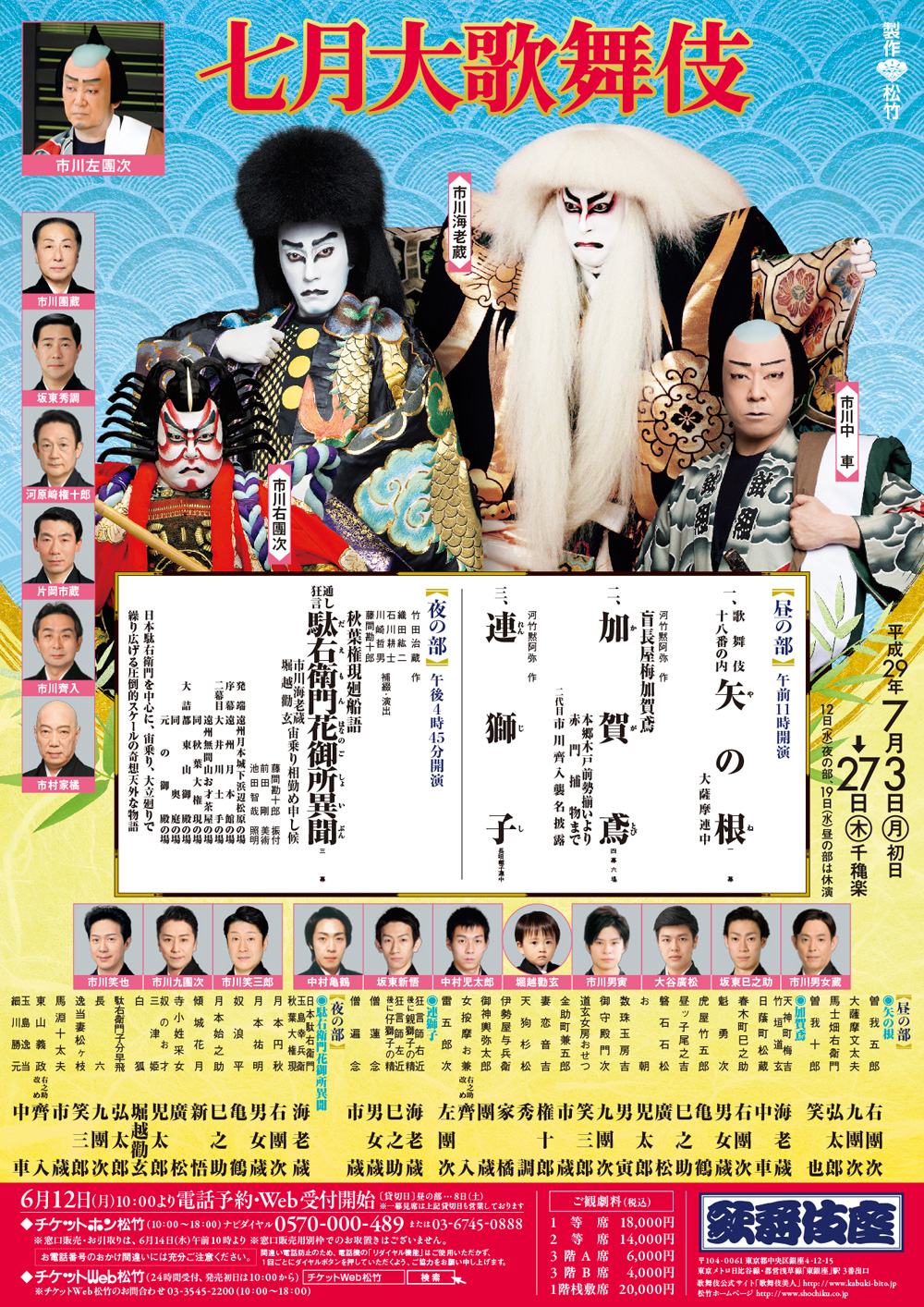 This month you can enjoy 2 popular plays and a famous dance in the Matinee: ‘Yanone’, ‘Kagatobi’ and ‘Renjishi’. In the Evening show, a full-length version of the play ‘Daemon Hana no Gosho Ibun’ will be staged. ‘Yanone’ is a play performed in the typical ‘aragoto’ (wild stuff) acting style, and the main character appears wearing lines of impressive ‘kumadori’ makeup. ‘Kagatobi’ is a ‘sewamono’ play that portrays the life of ordinary people living in the Edo period. It features a fight between fire fighters, and the spoken lines are very rhythmical. ‘Renjishi’ is a dance about father and cub ‘shishi’ lion spirits. The ‘keburi’ scene where the two swing their heads around is very famous in kabuki. ‘Daemon Hana no Gosho Ibun’ in the Evening show is a story about Nippon Daemon, a famous robber in kabuki. The play is full of spectacular scenes including a flying scene and a dynamic fighting scene!

This play is one of the great classics of the bombastic 'aragoto' style of acting. It shows the Soga brothers, Gorō and Jūrō, who suffer in poverty for eighteen years until they can avenge the death of their father. This play combines the antics of the super-strong Gorō with the comic, urbane and witty atmosphere of the kabuki of the Genroku period. Gorō is sharpening a gigantic arrow when in a dream he is alerted to his brother being in danger. He explodes in a burst of energy and rushes to save him.

[The Firemen of Kaga]

This is a 'sewamono' play, a work portraying in a realistic way the lives of ordinary people in the Edo Period.
A big fight has broken out over a trivial matter between the firemen of Kaga Domain and the fire fighters under the direct control of the Edo shogunate. All the firemen of Kaga including Matsuzō of Hikage-chō gather at the town gate of Hongō to beat the fire fighters of the Edo shogunate, but Umekichi of Tenjin-chō persuades his impetuous colleagues to withdraw.
A masseur Takegaki Dōgen kills the farmer Tajiemon at the embankment of Ochanomizu and steals the money he possessed. Matsuzō, who has happened to pass by, picks up a tobacco pouch which Dōgen dropped. Dōgen hears that his niece Oasa received money from the Iseya pawn shop where she is an apprentice, and thinks of extortion. He visits Iseya with his lover Okane, a masseuse, and tries to extort 100 gold coins. But Matsuzō shows the tobacco pouch to Dōgen and they scuttle off. Finally, his evil deeds are discovered and pursuers are sent after him. In the end he is arrested before the front gate of the mansion of the Kaga Domain.
Enjoy the speeches in seven-five syllabic meter which is typical of the playwright Kawatake Mokuami, as well as how a single actor plays both Umekichi and Dōgen.

Two entertainers perform a dance that illustrates the tale of the legendary 'shishi', lion-like spirits that live on the peak of a holy Buddhist mountain. Their dance, based on an old legend, shows a parent 'shishi' subjecting its cub to harsh training in order to grow up strong. The 'shishi' kicks its cub down to the bottom of a ravine because it will only nurture strong cubs that manage to climb up on their own. Later, the 'shishi' parent and cub themselves appear and perform with wild shaking of their long manes.

[Strange Tales of Daemon in Kyōto]

This is a 'jidaimono' (history play) set in the Muromachi Period (15th century).
The protagonist of this play Nippon Daemon, who also appears in another famous work 'Shiranami Gonin Otoko' as the head of a gang of bandits, is modelled on a real gangster named Hamashima Shōbē who used to be a masterless samurai. His name is said to derive from that of the gangster Nihon Zaemon in 'Fūzoku Taiheiki'.
Starting by taking over the Tsukimoto clan in Tōtōmi Province (present day Shizuoka Prefecture), Nippon Daemon plans to rule Japan. He steals the heirloom of the Tsukimoto family, a manuscript of the 'Kokin Wakashū' ('A Collection of Ancient and Modern Japanese Poetry') that is written in the author Ki no Tsurayuki's own hand. In addition, he also steals the three-foot-long stick of Akiba Gongen, the god of miraculous efficacy in fire, whom the Tsukimoto family has believed in for generations. Tamashima Kōbē, the brother of Tamashima Ittō who was a retainer of the Tsukimoto family, confronts Daemon. The time when Daemon's ambitions will be fulfilled seems to be near at hand. However, the divine spirit of Akiba Gongen Shrine stands in his way and....
The highlights of this play include the scene where Daemon practices sorcery, the fight between Daemon and the divine spirit of Akiba Gongen Shrine, and the scene featuring a flight through the air. Please look forward to this revival of a play not performed for a long time.