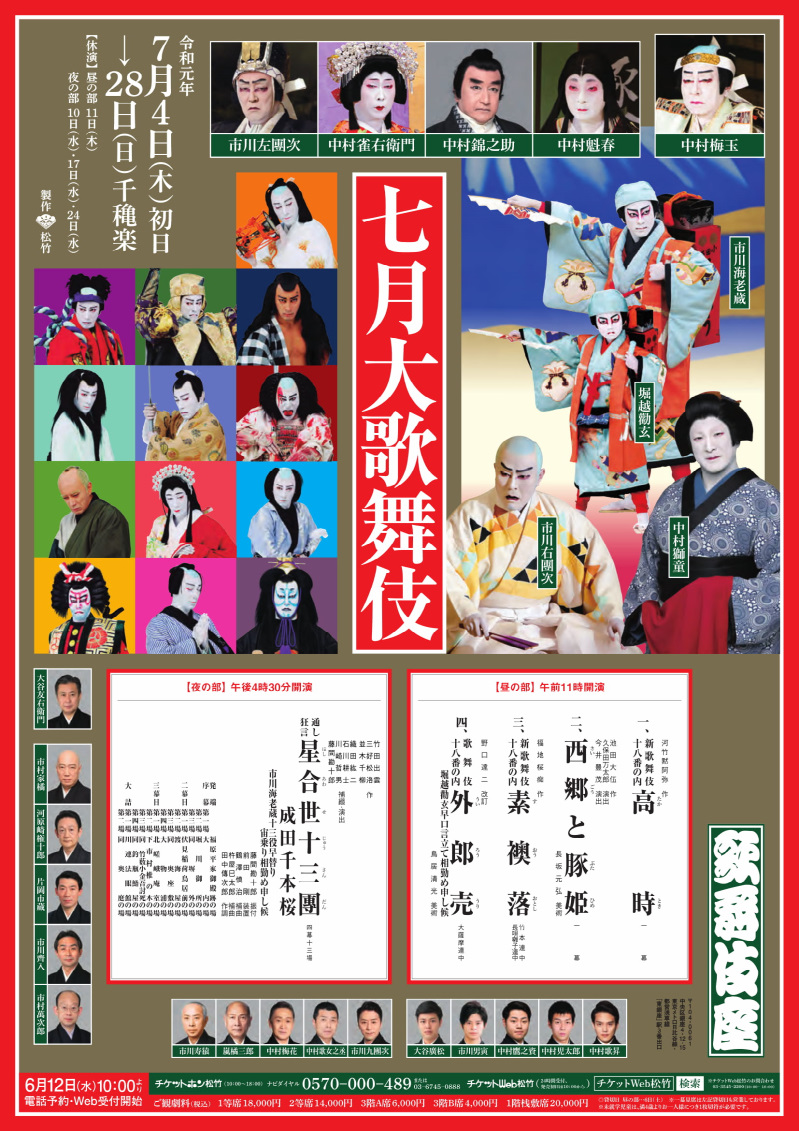 This month’s program is performed by the troupe lead by the popular star Ichikawa Ebizō.
In the Matinee, plays that represent the 'family art' of the Ichikawa Danjūrō line (one of the representative kabuki families), a masterpiece of the ‘Shin Kabuki’ (‘New Kabuki’) genre, and a dance drama will be performed.
In the Evening Show, Ichikawa Ebizō, who will succeed to the important name of Ichikawa Danjūrō XIII next spring, enacts 13 roles with quick-changes and aerial stunts in a full-length play filled with highlights.

First performed in 1884, and one of the "Shin kabuki Jūhachiban" ("New eighteen Favorite Kabuki Plays of the Ichikawa Danjūrō Family"), this play is one of the most famous of the "Living History" category that replaced the historical fantasies of the Edo Period with a new attention to factual accuracy. The last Hōjō regent in the Kamakura Period was arrogant and given to pleasure, and in this play we see him mocked by a band of flying tengu goblins, an event presaging the end of the rule of the Hōjō family.

This play, written by the early 20th century playwright Ikeda Daigo, presents a love story involving an unlikely couple. Saigō Takamori, a leading member of the Meiji Restoration, was known for his brusque manner and stout physique. Having been disowned by the lord of his clan and pursued by assassins of the enemy faction, the young Saigō is hiding in a Kyoto brothel where he meets the maid Otama. The plump Otama has the nickname, "Butahime," or the "pig princess". The two fall in love and have a bittersweet romance. Having given up all hope in the world, they even decide to die together, but in the end, events suddenly turn in Saigō's favor.

Delivering a message for his lord, the servant Tarōkaja visits his lord's uncle. A large amount of drink makes him tipsy and he begins a dance in which he describes a famous battle. As a reward for the dance, he receives a formal coat. When he returns to his lord's house, still rather drunk, Tarōkaja is scolded and his greedy lord takes away his brand-new formal coat.

Kudō Suketsune, a senior vassal of Minamoto no Yoritomo, was appointed master of the hunt at the foot of Mt. Fuji.Having finished the preparation​s for the hunt, Suketsune relaxes at the Ōiso pleasure quarters. An Uirō medicine peddler, a specialty of Odawara, is called in as entertainment at the drinking party. Uirō is a Chinese medicine transmitted to the Uirō family, but this Uirō peddler is in reality Soga no Gorō Tokimune who seeks Suketsune's life as his father's murderer...
Horikoshi Kangen (Ebizō's son) will try his hand at the famous tongue-twisting dialogue as ​the Uirō peddler and ​will relate the origins and explain the efficacy of the medicine in a fluent speech.

This is an adaptation of "YOSHITSUNE SENBON ZAKURA", one of the greatest classics of kabuki.
Ebizō will display traditional acting techniques such as quick changes of ​role and ​an aerial stunt.
During the war between the Genji and Heike clans, Yoshitsune receives a precious hand drum as a reward for subjugating the Heike. But there is a falling out between Yoshitsune and his elder half-brother Yoritomo, the leader of the Genji forces.
As a result of this, Yoshitsune must now flee from the capital and leaves his lover Shizuka in the care of Satō Tadanobu.
Yoshitsune books passage on a boat to Kyushu, but the captain is actually the Heike general Taira no Tomomori in disguise. He uses this opportunity to try to get his revenge on Yoshitsune but is finally defeated again.
The Heike commander Taira no Koremori now lives disguised as Yasuke, the humble apprentice of a sushi shop. Knowing of the bounty on Koremori's head, the ne'er-do-well Gonta hands over Koremori's head, as well as his wife and daughter, to the Genji commander. However, it turns out that he only pretended to kill Koremori. In fact, he sacrificed his own wife and son to save the real Koremori and his family.
Tadanobu and Shizuka come to see Yoshitsune in Yoshino. This Tadanobu is actually a fox which took on human form to be close to the precious drum which is made from the skins of his fox parents. Touched by this, Yoshitsune eventually gives him the drum.