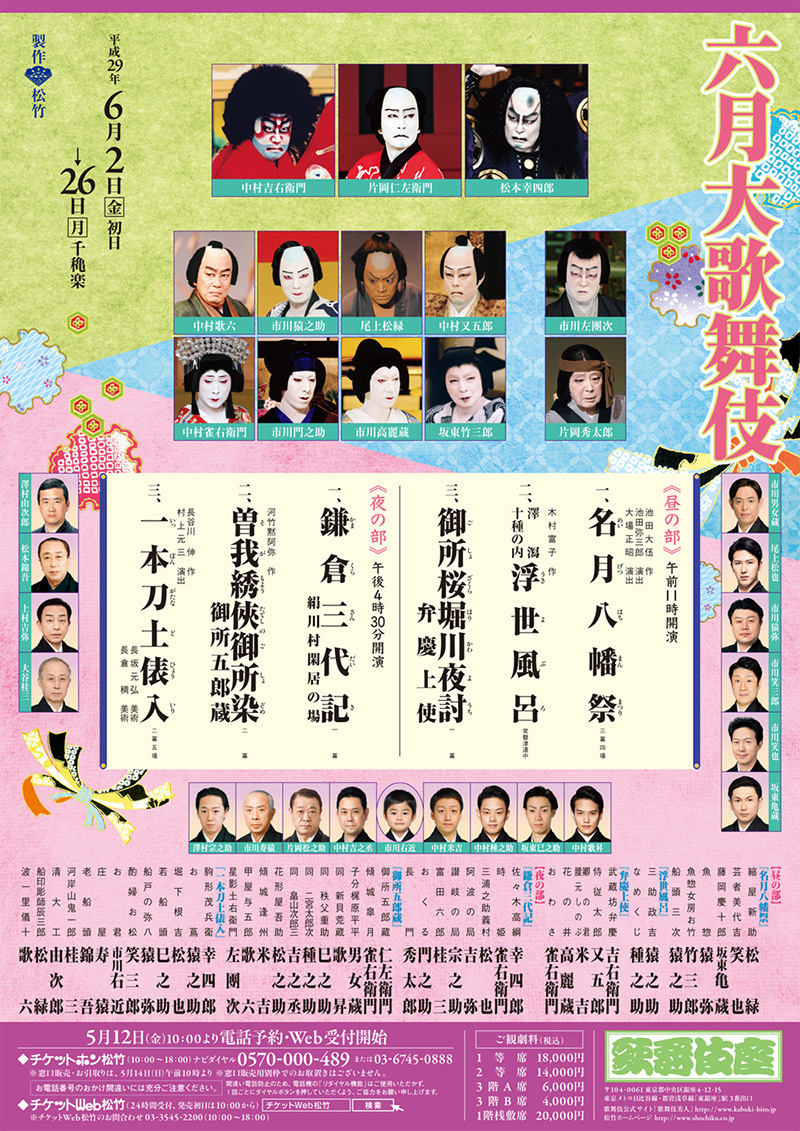 This month you can see a splendid cast ranging from young stars to top-rated actors such as Matsumoto Kōshirō, Nakamura Kichiemon and Kataoka Nizaemon who will perform classic masterpieces, a dance, as well as "New Kabuki" plays...

First performed in 1918, this is a so-called 'New Kabuki' ('Shin Kabuki') play by Ikeda Daigo. Miyokichi is a spirited geisha in the Fukagawa district with a distinguished lord as a patron and a good-for-nothing boatman as a lover. On the occasion of the Hachiman festival, she attempts to raise an enormous sum of money for her lover Sanji, but refuses to ask the patron who has been so good to her. Instead, she tries to get it from the merchant Shinsuke. Shinsuke has long been in love with Miyokichi and he brings the money in order to make her his own. However, she decides to get the money from her patron after all and so has no further interest in Shinsuke. When the ardent merchant learns that he has been deceived, love turns to anger and he kills Miyokichi in a beautiful and gruesome scene in the rain. After all is done, the full moon of the autumn festival appears.

This is a dance portraying the attendant Masakichi at a public bath in the Edo Period.
Masakichi, wearing a red loincloth, goes about his chores stacking up wooden pails neatly and checking the temperature of the bath. At dawn when the cocks crow he rinses the bathers' backs. However, one day a slug in the figure of a woman appears. It falls in love with the dashing attendant and tries to make love to him, but Masakichi sprinkles salt on it to drive it out. Then a young man strikes at him, but Masakichi handles him with skill.

This is a 'jidaimono' (history play) set at the end of the Heian Period (12th century). The story is based on the legend of the great warrior Benkei who was said to have wept and shared a bed with a woman only once in his life.
Kyō-no-kimi, the wife of Minamoto no Yoshitsune, is pregnant and is resting at the mansion of her guardian, the chamberlain Tarō. She is the daughter of Taira no Tokitada who is opposed to the Minamoto clan. For this reason, Yoshitsune's brother Yoritomo suspects Yoshitsune of treason and sends Musashibō Benkei as his emissary to demand that he present her head. Tarō asks her lady-in-waiting Shinobu to be her substitute, but although Shinobu agrees to make this sacrifice her mother Owasa is opposed to it. Shinobu was born the daughter of Owasa and a man whose name she does not know. Owasa shared a bed with this man only once eighteen years ago, and now she insists that she must not let Shinobu die before he meets her. At that moment, Benkei thrusts a blade through the sliding door and pierces Shinobu. He is none other than the man who slept with Owasa and Shinobu's father. He restrains himself from calling himself Shinobu's parent and beheads her as Kyō-no-kimi's substitute. He leaves the mansion holding his daughter's head.

[Three Generations of the Kamakura Shogunate - The Retreat at Kinugawa Village]

This is a 'jidaimono' (history play) set in the Kamakura Period (13th century).
Miuranosuke is a young samurai serving the lord of a besieged castle. Tokihime, the woman to whom he is betrothed, is the daughter of the lord leading the attack on the castle. While he is away at battle, Tokihime comes to a lonely farming village to care for Miuranosuke's sick mother. Miuranosuke comes back from the battle to see his mother, but she refuses to let him in since he has come away from his duties. In turn, Miuranosuke refuses to see Tokihime because she is the daughter of the enemy. Finally, all is revealed to be a plot by the brilliant strategist Takatsuna, to force Tokihime to assassinate her father.

[The Gallant's Kimono Dyed with the Soga Design]

This is a 'sewamono' play, a play portraying in a realistic way the lives of ordinary people in the Edo Period.
This play is set in the Gojōzaka pleasure quarter at its time of greatest splendor. Rival gangs dressed in the height of fashion exchange stately speeches before fighting, speaking lines in the elaborate poetic cadences of Kawatake Mokuami, the last great playwright of kabuki. Gorozō is the handsome leader of a gang, but his lover, the top courtesan Satsuki pretends to reject him to save his life. Tragedy strikes when Gorozō is driven to revenge...

[Mohē, from Sumō Wrestler to Gangster]

First performed in 1931, this is a so-called 'New Kabuki' ('Shin Kabuki') play by Hasegawa Shin. The protagonist Komagata Mohē is a starving, would-be sumō wrestler. He encounters a courtesan named Otsuta who takes pity on him. She gives him her purse and hair ornaments, making him promise to become a champion sumō wrestler. In turn, she promises to go to see him make his ceremonial entry into the ring. But ten years later, Mohē has become a gangster instead. Now a powerful fighter, he rescues Otsuta and her family. Ironically, this shameful form that his entry into the ring has taken is the only way that he can repay her kindness.