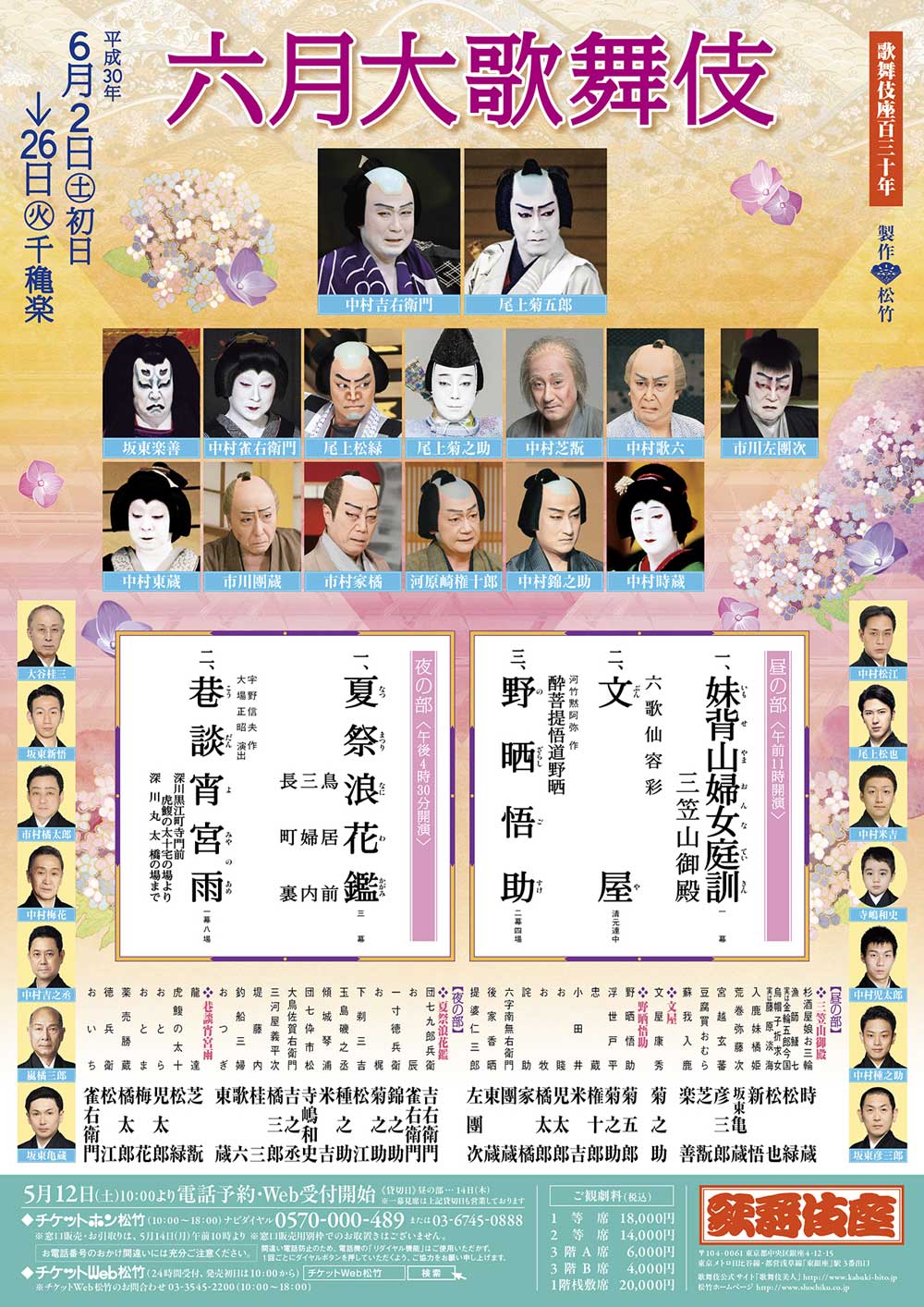 *Reserved seats for the Matinee are sold out on the 14th (Thurs). (Single Act Seats will still be available.)
◆Buy Tickets Online [For Non-Member/Multilingual Website]

The year 2018 is the 130th year since the opening of the Kabukiza Theatre.
The highlights of this month’s program are two sewamono plays, works portraying in a realistic way the lives of ordinary people in the Edo period, that depict dashing chivalrous men. Onoe Kikugorō plays the leading role in the Matinee, while Nakamura Kichiemon stars in the Evening Show. In the Matinee there is also a history play set in ancient times and a humorous and tasteful dance, while in the Evening Show there is a horrifying ghost story belonging to the so-called ‘New Kabuki’ play category. Come and enjoy a variety of works that are perfectly suited to early summer.

[ Imose Mountain and the Model of Virtuous Women - The Mikasayama Palace ]

This act depicts the intrigues at the imperial court in ancient Japan. More than a tale about politics, however, this is a tragedy that entails love and sacrifice.
The country is under the domination of the dictator Iruka. His supernatural power, which makes him invulnerable, can only be defeated by hearing the sound of a flute into which has been poured the blood of a sacred deer and the blood of a living jealous woman. Omiwa, the daughter of a sake shop owner, is jealous because her fiancé Motome is going to marry another princess. In her jealousy, Omiwa is stabbed by Fukashichi, who is a retainer of Kamatari, the opponent of Iruka. The living blood of Omiwa finally helps to defeat the evil Iruka.

[ Bun'ya no Yasuhide, one of the Six Poetic Geniuses ]

This is one section of a humorous series of dances, each one reinterpreting the usual portrayal of an ancient Japanese poetic genius in the style of the Edo period. In this case, the low-ranking court noble Bun'ya no Yasuhide pursues the fabulously beautiful Ono no Komachi, but instead encounters some court ladies with whom he has a comical dialogue on the theme of love.

This is a sewamono play, a work portraying in a realistic way the lives of ordinary people in the Edo period （1603-1868）.
Gosuke is a chivalrous commoner in Ōsaka and a pupil of a famous priest. Being a very handsome and suave man, he finds himself proposed to by two women. But he is perplexed because he is undergoing ascetic practices. Nor is this all, having inadvertently insulted a local gang boss, he is challenged by the gang. Since it is the anniversary of his mother's death, however, he refrains from fighting back due to his religious observances. Finally, he takes his own revenge on the gang boss later, in front of a large temple gate in a spectacular fight scene.

[ The Summer Festival in Old Ōsaka - Sumiyoshi Shrine, Sabu's House and the Back Lane at Nagamachi ]

This is a 'sewamono' play, a work portraying in a realistic way the lives of ordinary people in the Edo period (1603-1868).
This popular work shows the pride of a chivalrous man in old Ōsaka. Danshichi, a gallant fishmonger, does everything he can to protect the son of his patron with his companion Tokubē and Sabu, and even Tokubē's wife heroically helps out by sacrificing her beautiful face. But in the end, Danshichi is betrayed by his evil father-in-law Giheiji. In the famous climax of the play, Danshichi is forced to kill Giheiji in a muddy field down a lonely back alley. As the two struggle desperately using real water and mud, Danshichi's beautiful tattoos are exposed and they strike a series of magnificent poses. In the background we hear the shouts of local festival-goers nearby.

[ The Ghostly Priest's Revenge in the Rain ]

This is a ghost story by Uno Nobuo first performed in 1935 and belonging to the category of so-called 'New Kabuki' plays.
It portrays the greedy, lecherous priest Ryūtatsu who must depend on his nephew, the playboy Tajū. Ryūtatsu had left his daughter Otora in Tajū's care, but Tajū's wife Oichi was cruel to her and they sold her to a lowlife doctor to serve as his mistress. Tajū kills his uncle for the money he has hidden. But Ryūtatsu's ghost gets its revenge by haunting Oichi to death. Mysteriously, Otora is found dead in the same box into which Tajū had previously put Ryūtatsu and thrown into the river. Frightened at seeing the ghost, Tajū falls into a river and drowns.