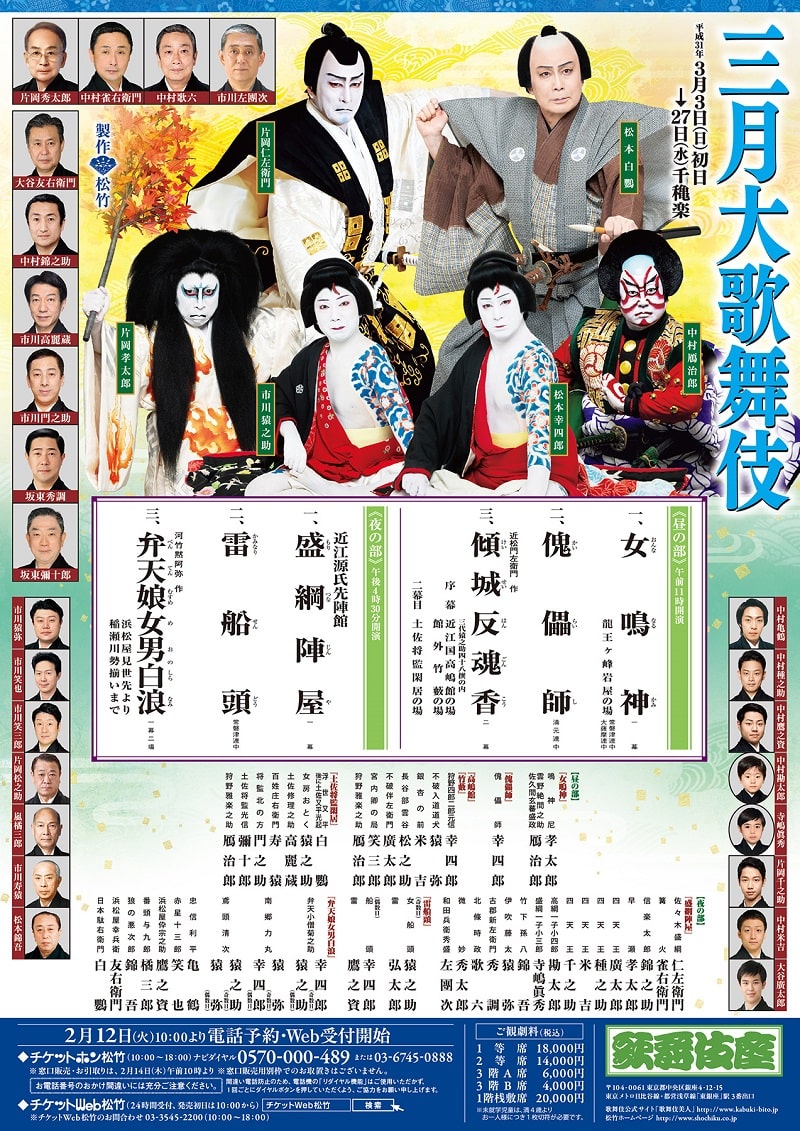 This month, the matinee begins with a parody of the popular play ‘Narukami’, followed by a dance, and then a ‘sewamono’, a category of plays portraying the lives of ordinary people in the Edo period (1603-1868). The ‘sewamono’ play includes a very rarely performed scene. In the Evening Show a masterpiece of the ‘history play’ genre is performed, after which will be a popular ‘sewamono’ play that casts two star actors each for three main roles, and a dance. It is a perfect opportunity to enjoy kabuki in spring in Tokyo.

This is a parody of NARUKAMI [The Thunder God], one of the oldest plays in the kabuki repertory, but in this version the leading character is played by an 'onnagata' female role specialist.
To place a curse on her father's killer Oda Nobunaga, the priestess Narukami imprisons the rain gods in a pool beneath a waterfall, causing a severe drought. A handsome young man named Kumono Taemanosuke appears who happens to resemble her former fiancé. Having been seduced by his story, she is convinced that he is her former lover and she exchanges cups with him in token of marriage-vows. However, in reality, he is a spy sent by Nobunaga to break her power. When she realizes that she has been betrayed, she flies into a rage and fights against Sakuma Genba Morimasa who comes to arrest her.

This is a dance depicting an itinerant puppeteer.
He carries a variety of puppets in a box which he suspends from his neck. With this he can perform on the spot, using the puppets to enact many different roles which he demonstrates for us. Finally, he makes some sparrows escape from his box and he dashes off after them.

Scenes from Chikamatsu Monzaemon's play depicting contrasting painters.
Rokkaku Yorikata, the lord of Ōmi Province, summons the painter Kanō Motonobu to his mansion, where Motonobu becomes engaged to Yorikata's daughter Ichōnomae. However, Yorikata's chief retainer accuses Motonobu falsely and Motonobu is bound to a pillar. After he paints a tiger with his blood on a sliding door, the tiger comes to life and gnaws through his rope, enabling him to escape.
The painted tiger runs away and reappears at Tosa Shōgen's retreat. Shōgen's pupil Shurinosuke makes the tiger disappear by brushing over it and, as a reward, he is given a special artist's name. Matahei and his wife come to beg Shōgen for his own artist's name, but their request is turned down. Resolving to leave a farewell portrait before he takes his own life, Matahei paints a picture of himself on a stone washbasin. As he does so, the painting appears on the other side of the basin. Witnessing this miracle, Shōgen finally agrees to give him an artist's name and orders him to rescue Ichō-no-mae.

[ 'Moritsuna's Battle Camp' from 'The Chronicles of the Battle of Ichinotani' ]

This is a 'jidaimono' history play set in the Kamakura Period (1185-1333).
War has broken out between Minamoto no Yoriie in Kyoto and Hōjō Tokimasa in Kamakura. The Sasaki brothers Moritsuna and Takatsuna fight on opposite sides. Takatsuna's son Koshirō is captured and held prisoner by Moritsuna. When a general from Takatsuna's side comes to ask for the boy's return, Moritsuna worries that his brother's love for his son will cause him shame. Soon, the news of Takatsuna's death is reported and Tokimasa arrives with Takatsuna's head .
Moritsuna is ordered to verify that the head is really that of his brother. Before Moritsuna has completely lifted the lid of the head box, Koshirō runs out and commits ritual suicide, saying he will follow his father to the grave. However, looking at the head, Moritsuna sees that it is not Takatsuna. This is all a ruse to fool the enemy. Impressed by Koshirō's brave sacrifice, Moritsuna declares falsely in Tokimasa's presence that the head is indeed that of Takatsuna.

[ 'The Boatman and the Thunder God' ]