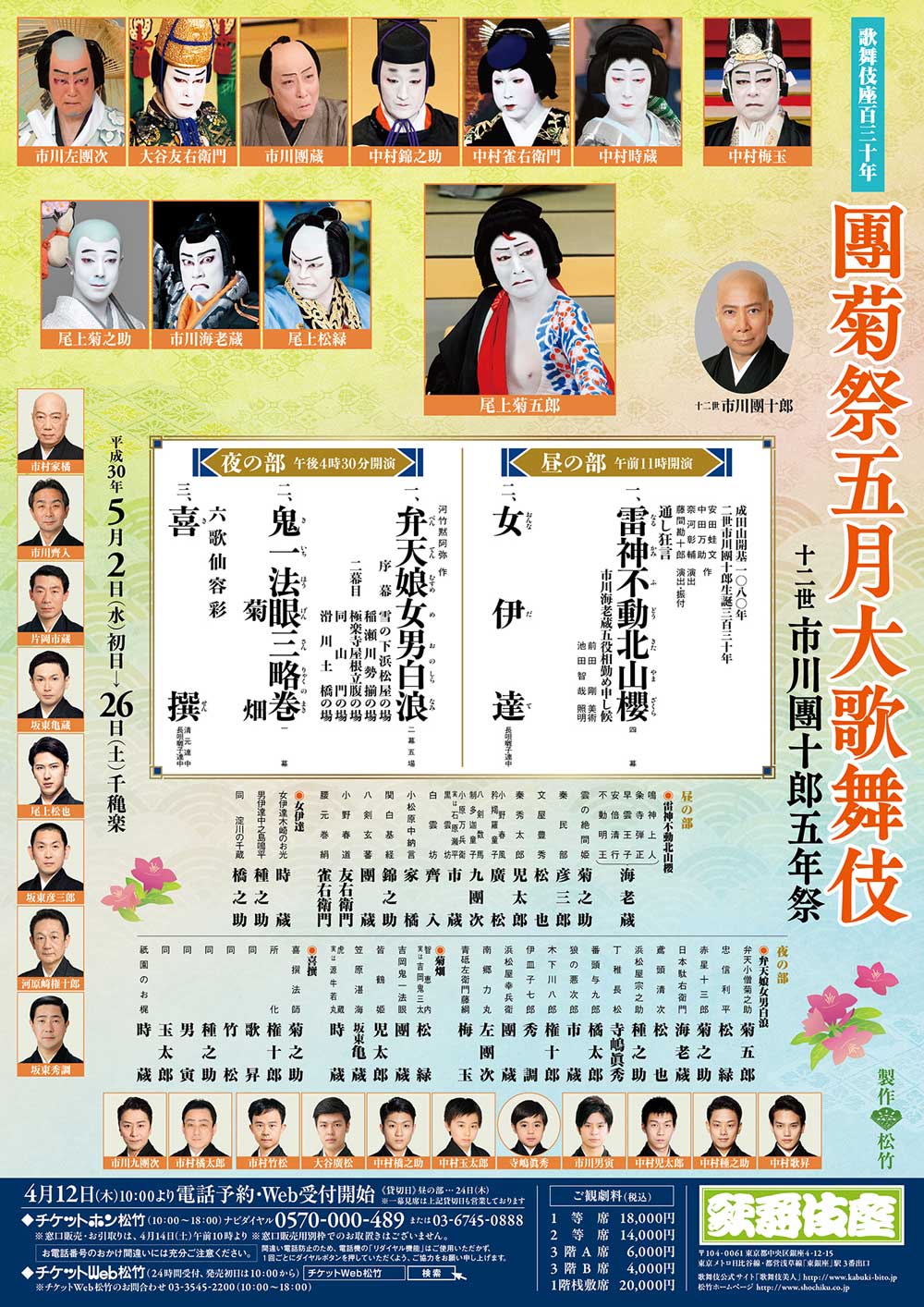 The year 2018 is the 130th year since the opening of the Kabukiza Theatre.
This month’s performances commemorate the fifth year since the death of the great actor Ichikawa Danjūrō XII. We remember him by performing plays with which he was associated. The Matinee starts with the full-length production that brings together three works from the Kabuki Jūhachiban, (the Eighteen Favourite Kabuki Plays that are associated with the Danjūrō line of actors), and ends with a showy dance featuring a chivalrous woman. The Evening Show starts with a story of five thieves that is filled with typical elements of kabuki: fluent speech, music and gorgeous fashion. The next is a serious jidaimono history play while the last is a light and humorous dance that makes a perfect contrast.

[Saint Narukami and the Deity Fudō]

This play commemorates the 1080th year since the foundation of the Narita-san Shinshō-ji Temple, and the 330th year since the birth of Ichikawa Danjūrō II.
'Narukami Fudō Kitayama Zakura' is a play showcasing the three works 'Narukami', 'Kenuki' and 'Fudō' which were some of the greatest hits of Danjūrō I and Danjūrō II . 'Narukami' is about a great priest who, angered by the emperor, imprisons the dragon god of rain in the pool beneath a nearby waterfall. This produces a drought throughout the land which causes great suffering for the people. A beautiful woman from the imperial court is sent to seduce the priest, and when he finds out that he has been tricked, his anger transforms him into a thunder god who vows to get his revenge.
'Kenuki' is about a wise samurai who acts as a detective to find out why a princess's hair mysteriously stands on end. He discovers the crucial clue when his metal whisker tweezers suddenly start floating in mid-air.
Finally, 'Fudō' is about the Buddhist deity of that name who is traditionally worshipped by the Danjūrō family of actors and the one to whom Danjūrō II attributed his success. In an impressive and spectacular tableau, the deity himself will appear on stage.

[ Benten, the Thief
- From the 'Hamamatsuya Clothing Store' scene to the 'Dobashi Bridge over the Nameri River' scene ]

Written by the famous playwright Kawatake Mokuami, this play is a perfect display of kabuki's stylized beauty. It includes a dynamic fight scene that is performed on a particularly gorgeous stage set.
A beautiful woman is suspected of shoplifting and is beaten. When it is proved that she was not stealing, her servant demands compensation. However, a samurai who happens to be present uncovers her ruse and reveals that the woman is actually a man. The former 'woman' and her accomplice are, in fact, Benten Kozō and Nangō Rikimaru, two members of the same infamous gang of thieves. Even the samurai who supposedly exposed their plot turns out to be none other than Nippon Daemon, the head of this gang. Finally, the gang is hunted down by officers and when they are surrounded, the five gang members remain defiant, delivering elaborate rhythmic speeches dressed in their finest kimono and accompanied by beautiful music. The last chase is shown in a one of kabuki's most famous and spectacular fight scenes that even incorporates a temple rooftop that flips up to reveal another beautiful set below.

This work is a great classic of the history play genre. There is a stylized beauty in both the way of acting and in the costumes. The story is accompanied by the narrative music and lyrics of the 'Gidayū' School. It is full of larger-than-life characters and is performed on a stage full of dazzling color.
In a garden of brilliant yellow and white chrysanthemums, we find Kiichi, an elderly strategist working for the dictator Kiyomori, and two footmen, the elegant young Torazō and the powerful Chienai. Kiichi's beautiful daughter Minazuru is deeply in love with Torazō.
However, Torazō is, in fact, a young general sent there by the enemy to steal Kiichi's secrets of strategy. Chienai is his retainer. But Kiichi has realized their true identities and the reason why they are there.

[ The poet-priest Kisen, one of the Six Poetic Geniuses ]

The dance 'Kisen' is one part of a series of dances portraying the six poetic geniuses of ancient Japan. The five male poets in the group are all shown as being in love with the sixth, Ono-no-Komachi, one of Japan's the most famous beauties. While the other dances are set in ancient Japan, this dance suddenly jumps to the Edo period (17th to 19th century) where the poet-priest Kisen wanders about intoxicated by the beauties of the cherry blossoms and by Okaji, a beautiful tea stand waitress.