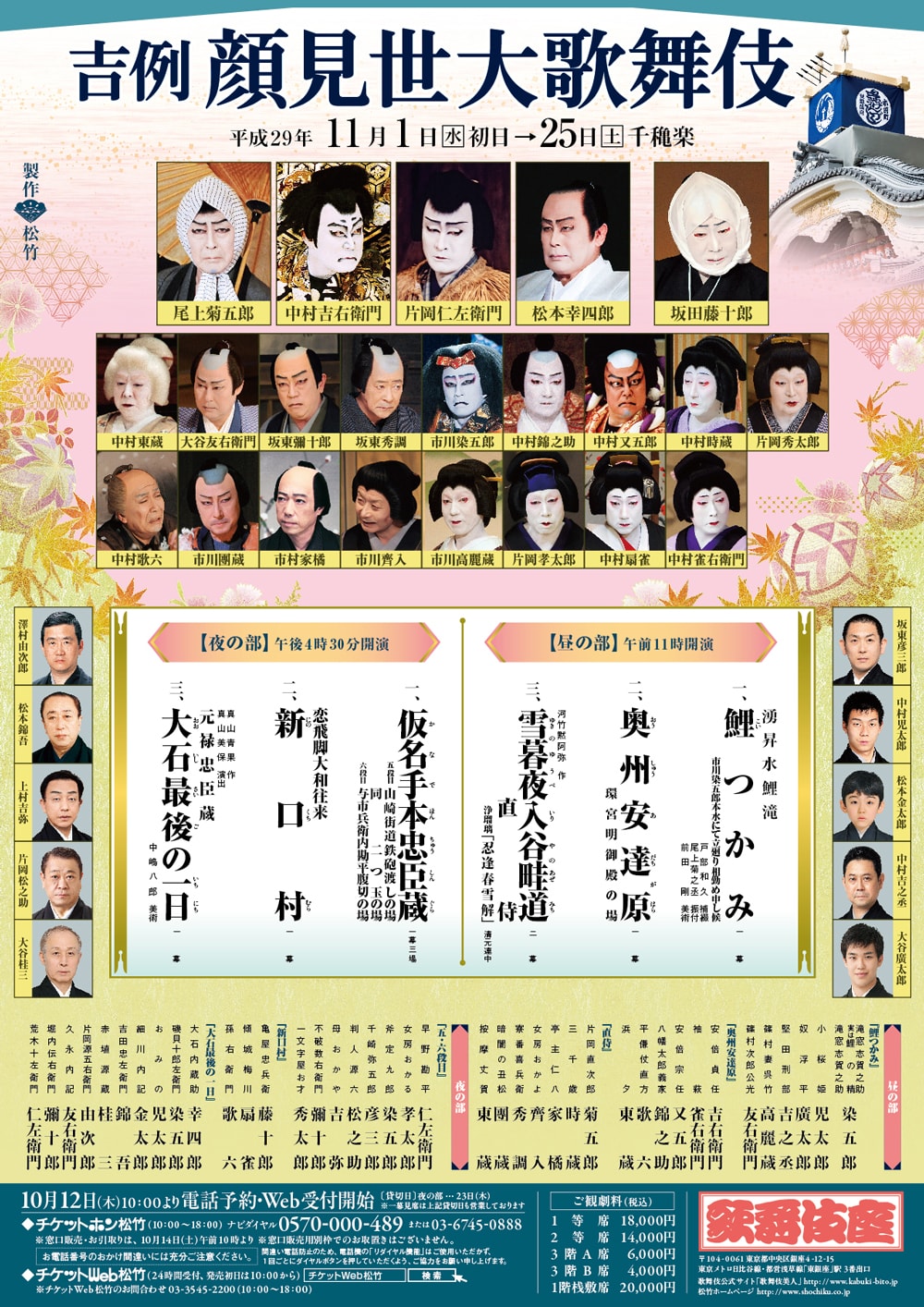 [Annual Kaomise Grand Kabuki] in TOKYO
A ‘Kaomise’ is an annual performance which has continued from the 17th century. It used to be held every year to show all the actors who are going to be on stage during the following twelve months. The Kaomise kabuki performance at the Kabukiza Theatre has been held every autumn since 1957, and has become an event that is particularly associated with that season in people’s minds. In this month’s performance, you can see masterpieces of the classics and a so-called ‘New Kabuki’ (‘Shin Kabuki’) play performed by splendid actors ranging from young stars to top-ranking veterans.

[Fight with a Carp]

This great classic originally comes from the end of Act III of a multi-act jidaimono, a history play set in the Heian era (12th century).
General Minamoto no Yoshiie has suppressed the rebellion of the Abe clan in Ōshū province. However, the emperor's brother Tamakinomiya has been abducted and his guardian Taira no Kenjō Naokata and his wife Hamayū are to bear the blame for that. Naokata must commit ritual suicide by disembowelment if he cannot locate Tamakinomiya whereabouts today. Naokata has two daughters. The elder daughter, Sodehagi, was disowned for having an illicit affair with a masterless samurai with whom she eloped ten years ago. That samurai turned out to be Abe no Sadatō. Now, hearing of her parents' difficulties, Sodehagi returns to their house, though she is now a blind beggar woman. She holds on tightly to her daughter Okimi's hand. Outside the door she apologizes to her parents by reciting a ballad. After her parents withdraw to an inner room, Abe no Sadatō's brother Munetō appears. Urged by Munetō to kill Naokata, she is at a loss and finally kills herself. Naokata also kills himself taking responsibility for having been unable to find Tamakinomiya. Yoshiie appears and finds out that Katsura Chūnagon who has come as an imperial envoy is, in reality, Sadatō. He parts from Sadatō promising to meet again on the battlefield.

The thief Naojirō has been betrayed and is on the run. His lover, the courtesan Michitose, becomes ill from grief at not being able to see Naojirō.
The first scene is set at a soba noodle shop. It is a cold spring night in the Iriya district of Edo (the old name for Tokyo).
Naojirō encounters the masseur Jōga who visits Michitose every evening to treat her.
Thanks to Jōga's kindness, Naojirō can risk one last meeting with his lover, but he has never revealed his true identity as a thief to her and as far as she knows, he is a wealthy merchant.
On a freezing, snow-bound night, in the final romantic scene accompanied by the sensuous tones of the Kiyomoto narrative singers, the two lovers Naojirō and Michitose meet. However, many pursuers appear and struggle with him. Realizing that the situation is hopeless, Naojirō cries out to Michitose that they will never meet again in this world.
Written by the famous playwright Kawatake Mokuami, please enjoy this 'sewamono' play (a play which portrays the lives of the ordinary people living in the pre-modern period).

[ The Treasury of Loyal Retainers ]
Acts 5 and 6

There are few plays more popular in kabuki than 'Chūshingura' or 'The Treasury of the Forty-Seven Loyal Retainers'. This is the story of a true incident in which a samurai lord attacked another in the shōgun's palace and was immediately sentenced to ritual suicide and his domain confiscated. After much hardship, forty-seven of the lord's retainers avenged their lord's death. When the event occurred, it was a sensation because it proved that despite a century of peace, samurai values had not disappeared completely. But when the event was dramatized, censorship and the fact that so little was actually known about the historical event forced the play to depend on easily understandable melodrama. Of the 47 retainers, there were some luckier than others. However, the fifth and sixth acts of the play concentrate on one of the unhappier retainers of the clan. The young samurai Kanpei was having a secret tryst with the lady-in-waiting Okaru just at the time of the incident that leads to his master's downfall. He was about to commit suicide to atone for his misdeed, but Okaru persuaded him to run away with her to her home in the country. Now living as husband and wife in Okaru's home village, they hope someday to find a way to reinstate Kanpei as a samurai and help him to serve in the vendetta that will restore their master's honor. This, however, eventually comes about under the most tragic circumstances.

[Ninokuchi Village] - From [The Courier From Hell]

This is a 'sewamono' play portraying in a realistic way the lives of ordinary people in the Edo period. In danger of losing his lover, Umegawa, the money courier Chūbē breaks the seals on a package of money entrusted to him after being taunted by a rival, even though the use of such money is punishable by death. In this scene, it is winter and they are on their way to commit lovers' double suicide. But before they meet their end, Chūbē wishes to take Umegawa to his hometown. The couple go through the snow-covered landscape when Chūbē's father Magoemon passes by. Chūbē and Umegawa hide their selves but Magoemon slips and Umegawa runs out to help him. Though knowing his son is there, and though this might be the last time they can see each other, they cannot meet because, if they do, Chūbē will also be punished. In the end the captures voice is heard and Magoemon tells them a short cut praying their life will continue a little bit longer..

In the modern period, from 1934 to 1941 even as Japan was at war in China and then plunged into World War II, Mayama Seika (1878 - 1948) painstakingly reworked 'Chūshingura' ('The Treasury of the Forty Seven Loyal Retainers') into a cycle of ten plays known as 'Genroku Chūshingura'. These focus on different incidents and different characters in this revenge classic adding historical details reflecting the Genroku period. 'Ōishi Saigo no Ichinichi' is a particularly popular work from this cycle which is often performed independently. Although it is the last play in the cycle, it was the first to be written and its success inspired the completion of all the others. In this play, Ōishi Kuranosuke is shown torn between his strict samurai duty that has made their mission a success, and the desire to let a young couple meet one last time before they must die. The masterless samurai of the Akō domain have successfully completed their unauthorized vendetta and are being housed at the mansion of a samurai lord while their fate is being decided. The vendetta has caused a sensation and a young boy comes to meet the men as they are imprisoned. The boy turns out to be a woman in disguise, Omino, hoping to meet her betrothed, Jūrōzaemon, who is one of the group. But until they know whether they will be able to have honorable deaths by ritual suicide or die by execution like common criminals, the leader of the group Ōishi Kuranosuke, cannot allow her to meet her fiancé.