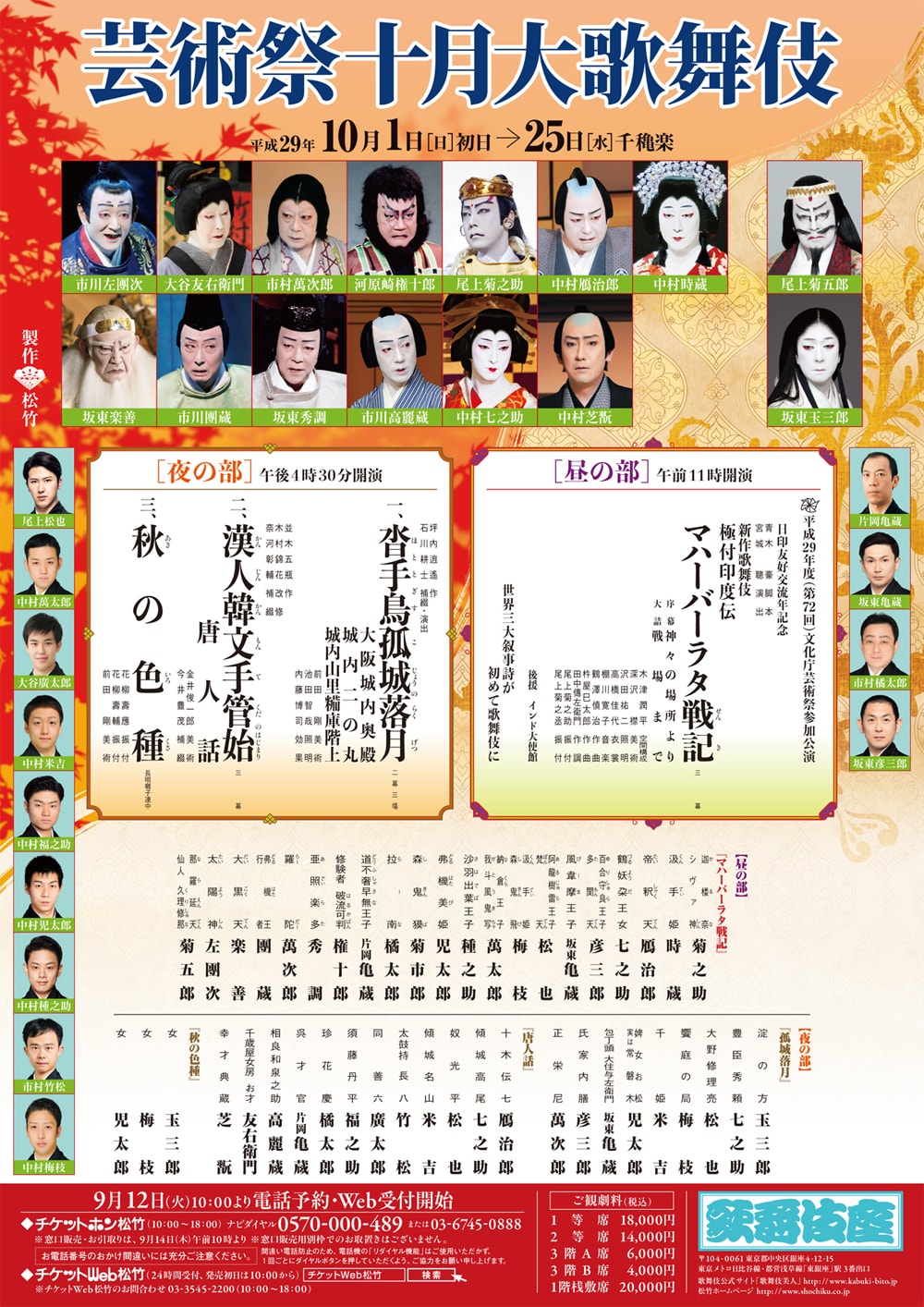 This month, ‘The War Chronicles of the Mahabharata’ is performed in the Matinee, commemorating 'The Year of Japan-India Friendly Exchanges'. It is a new Kabuki production adapted for the first time from one of the world’s three greatest epics. In the Evening Show, there is a famous early 20th century play, ‘The Setting Moon and the Fall of Osaka Castle’. Following this, there is a rare performance of an 18th century work named ‘The Story of the Chinese Ambassador’, after which is the dance, ‘Various Flowers of Autumn’ featuring Bandō Tamasaburō.

[The War Chronicles of the Mahabharata]

This is a new Kabuki production adapted for the first time from the Mahābhārata, one of the world's three greatest epics, the other two being 'The Iliad' and 'The Odyssey' of ancient Greece. The Mahābhārata is a mythical epic of ancient India and one of the two greatest Indian epics together with 'The Ramayana'. We are in the place where the gods assemble. Many gods such as Narayana, Surya, Mahakala, Indra, Brahma and Shiva look down on the human world. Shiva is astonished at the absurdity of human beings and laments their state. Surya begets a child by the very young Princess Kunti and tries to make him a savior to reign over the human world peacefully. But Taishakuten is opposed to the Surya. He also begets a child by Princess Kunti and intends to have him rule the human world by force. Surya's child is Karna and Indra's child is Arjuna. Princess Kunti gives birth to Karna, but she floats him down the Ganges. The years pass by and Karna grows up to be a youth of natural born abilities. As he bids his parents farewell to travel for archery training, his mother Rana confides to him that she is not his real mother. Karna comes to the capital where five princes including Arjuna, who are brought up as members of the royal family, are in competition for the throne against Karna's cousins, Princess Duryodha and her brother. Hermit Krishna arbitrates and they agree to decide which one deserves the throne by way of a tournament. Karna also takes part in the tournament and confronts Prince Arjuna, but he is mistreated as his origins are unknown. Noticing that Karna is her son whom she floated down the Ganges, Princess Kunti falls senseless and the tournament is called off. Karna bears a grudge against the five princes and he goes with Princess Duryodha. More years pass and the rivalry for the throne becomes more intense. Prince Arjuna laments over the vanity of the situation that has relatives oppose each other, but despite that, the war begins in Kurukshetra. Karna takes Princess Duryodha's side and confronts the five princes including his predestined rival, Prince Arjuna.

[The Setting Moon and the Fall of Osaka Castle]

Although in the late 16th century Japan was ruled by Toyotomi Hideyoshi, after his death, control quickly passed to Tokugawa Ieyasu, and the fate of Hideyoshi's clan, his wife Lady Yodo and young son Hideyori was sealed in a series of battles over their stronghold, Osaka castle. First performed in 1905, this play by Tsubouchi Shōyō was meant to focus on the torment of the Toyotomi's loyal retainer Katagiri Katsumoto, but the mad scenes of Lady Yodo as the clan is defeated are reminiscent of those of Lady Macbeth and have turned out to be the source of the play's enduring popularity.

[The Story of the Chinese Ambassador]

This work is a 'jidaimono' history play based on the case of a Korean ambassador who was killed by the interpreter Suzuki Denzō in Ōsaka in 1764. Izuminosuke, the young lord of the Sagara clan, was ordered to entertain the Chinese ambassador, and so he hosts Go Saikan in the pleasure quarters in Nagasaki. Go Saikan's love for the courtesan Meizan is unrequited because she loves Izuminosuke. Go Saikan is in a bad humor as she did not accompany him to the beach, but he comes around with the wit of the interpreter Kōsai Tenzō. Tsuzuki Denshichi, the chief retainer of the Sagara clan, is at a loss because he has lost the spearhead of the treasured heirloom spear which is to be offered to the Chinese ambassador. Furthermore, he cannot raise enough money to redeem Meizan. Tenzō promises Denshichi to authorize the offered spearhead as genuine even if it should be a fake. In fact, Tenzō loves the courtesan Takao and intends to ask Denshichi to act as a go-between. Hearing Takao say that she is in love with Denshichi, Tenzō burns with anger. Wearing a Chinese garment, he takes the place of the sick Chinese ambassador and reveals that the spearhead is a fake. Thus humiliated, Denshichi slays Tenzō in the inner garden of Kokubun-ji Temple.

This work was originally composed in 1845 as Nagauta music to celebrate the completion of the retreat for the lord of the Nanbu clan in Edo (the old name for Tokyo), and it was performed as a dance later. The lyrics include various plants of autumn such as wild bush clover, pampas grass and patrinia scabiosaefolia in its verse and is known as an excellent piece about that season. It is autumn. Various flowers of autumn bloom and the chirping of pine crickets is heard. A lady who stands quietly listening to the chirping insects, remembers the old story that King Xiang of the ancient Chu dynasty had an affair with the goddess of Mt. Fuzan in a dream, and she compares it to her own love. Having thought about her lover, she realizes that the pleasure of the four seasons does not change after many years and begins to dance.