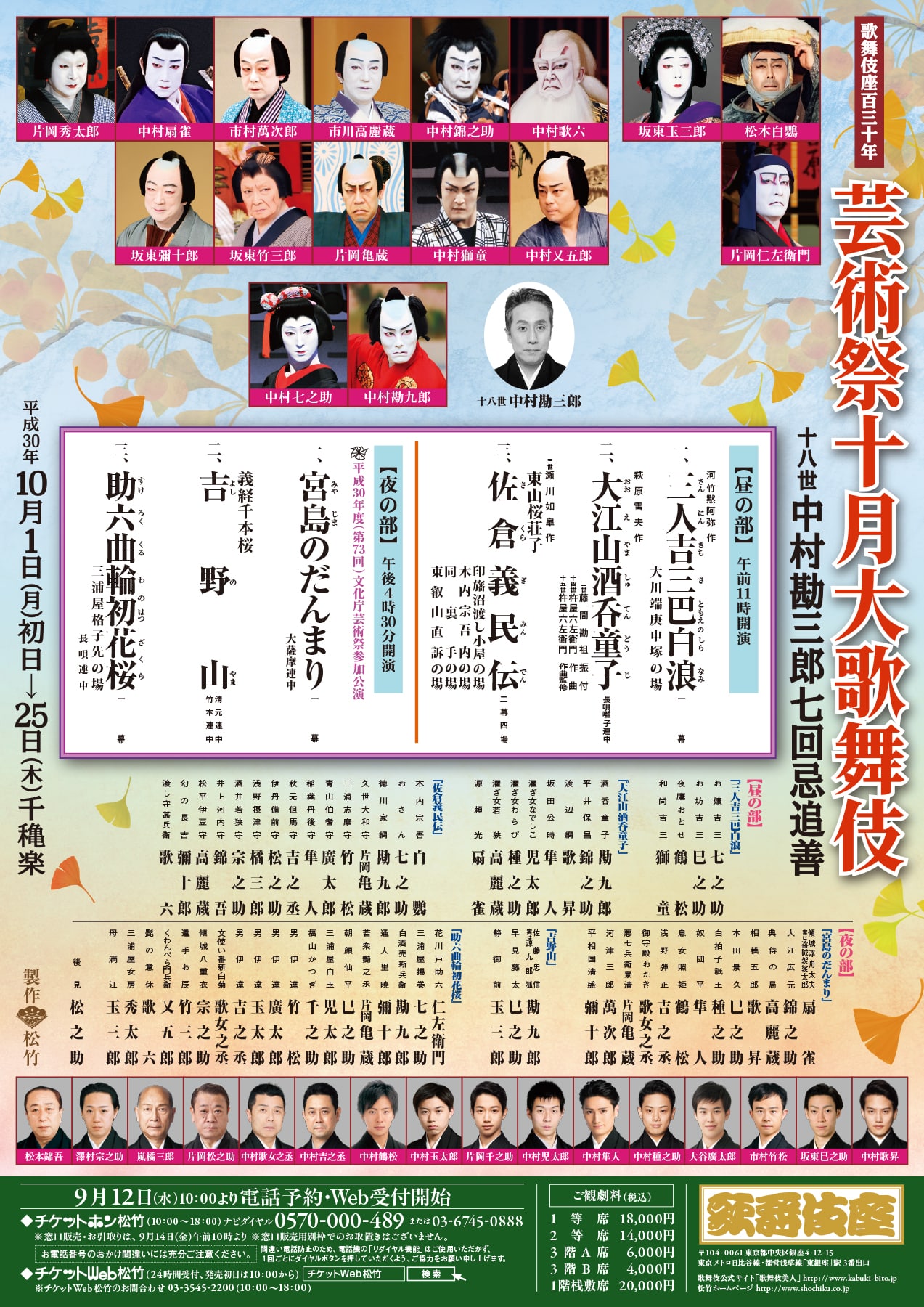 The year 2018 is the 130th year since the opening of the Kabukiza Theatre. This month’s program commemorates the 7th anniversary of the death of Nakamura Kanzaburō XVIII, so plays and dances associated with him are being performed. The top-ranking actors, Matsumoto Hakuō, Kataoka Nizaemon and Bandō Tamasaburō will appear on stage, while Kanzaburō’s two sons, Nakamura Kankurō and Nakamura Shichinosuke, will play important roles both in Matinee and the Evening Show.

A woman appears on stage and robs a street walker of her money. The woman is actually a man in disguise. A masterless samurai also appears and the pair starts fighting over the money. Soon, a priest comes between them to calm them down. This priest is actually the disreputable head of a rundown temple. The three eventually notice that they are all thieves who have the same name 'Kichisa', and so they become sworn brothers. Today we can still savor the somewhat decadent atmosphere in the piece that is typical of the late 19th century, and with its famous poetic speeches that sound so melodic, the play is all the more beautiful.

This is a dance drama adapted from the legend of Shutendōji, a demon who loves drinking and lives on Mt. Ōe. Every night, Shutendōji abducts women from the capital and devours their flesh during the day. Ordered to slay this monster, Minamoto no Raikō goes to Mt. Ōe with his retainers disguised as mountain priests. The demon appears before them in the shape of a child. Knowing that Shutendōji loves drinking, Raikō wisely gives him alcohol to take away his power before slaying the demon.

Sōgo cannot stand the suffering of the farmers around him. A series of bad harvests has made things very hard, but corrupt officials refuse to lower taxes or relent in any way. Sōgo goes to Edo to inform the feudal lord himself of these matters, but is turned down by his evil retainers. He decides to bring the case directly to the shogun, a move punishable by death. Hoping to see his family for one last time, Sōgo heads home but there is no boat to cross the river. There was a law that banned boats from crossing the river at night. Sōgo begs the old ferryman to take him across the river. Hearing Sōgo's resolution, the old man cuts the rope tying the boat. The play portrays Sōgo's self-sacrifice in a moving scene where he says farewell to his wife and children, knowing that he may never see them again.

[ Fight in the Dark on Miyajima Island ]

A 'Danmari' is a special scene in kabuki which shows people groping in the dark for a treasure or a banner. In this play, the 'danmari' takes place at the Itsukushima Shrine. The thief Kesatarō, disguised as a courtesan, and the warriors of the Genji and Heike clan search for a scroll in the darkness. At the end of the play, Kesatarō exits the stage in a most unique style called 'Keisei Roppō'. While the upper half of his body performs a manly 'Ryōte Roppō' (Roppō with two hands), his bottom half performs a 'hachimonji' (a courtesan's special style of walking in the shape of the character 'eight').

['Mt. Yoshino' from 'Yoshitsune and the Thousand Cherry Trees']

This is a beautiful dance filled with mystery and excitement set amidst the dazzling cherry blossoms of Mt. Yoshino. Shizuka and Tadanobu are on their way to find Shizuka's lover, the military commander Yoshitsune. He has become a fugitive and has had to leave Shizuka behind in the care of his retainer Tadanobu. However, this Tadanobu is actually a magic fox in disguise. He has transformed into human form in order to be with a drum that Shizuka carries, the skins of which are made from the hides of the fox's parents.

[Sukeroku in the Pleasure Quarters]

The Yoshiwara Pleasure quarters in Edo (old Tokyo) are bustling as always. Wearing the most gorgeous kimono, Agemaki, the top courtesan of the Miuraya teahouse, is tipsy and rests in front of the shop. Ikyū, the bearded gallant is in love with her and speaks ill of her lover Sukeroku out of jealousy. Hearing these words, she becomes furious and picks a fight. Just then, Sukeroku himself appears, and after showing off his handsome appearance, he tries to start a fight with Ikyū. This is not a surprise, for Sukeroku is famous for starting fights with people, but this is actually Sukeroku's plan to unsheathe people's swords in order to find out who stole the treasured sword that lead to his father's death. Sukeroku finally sees Ikyū has this very sword and ambushes him....