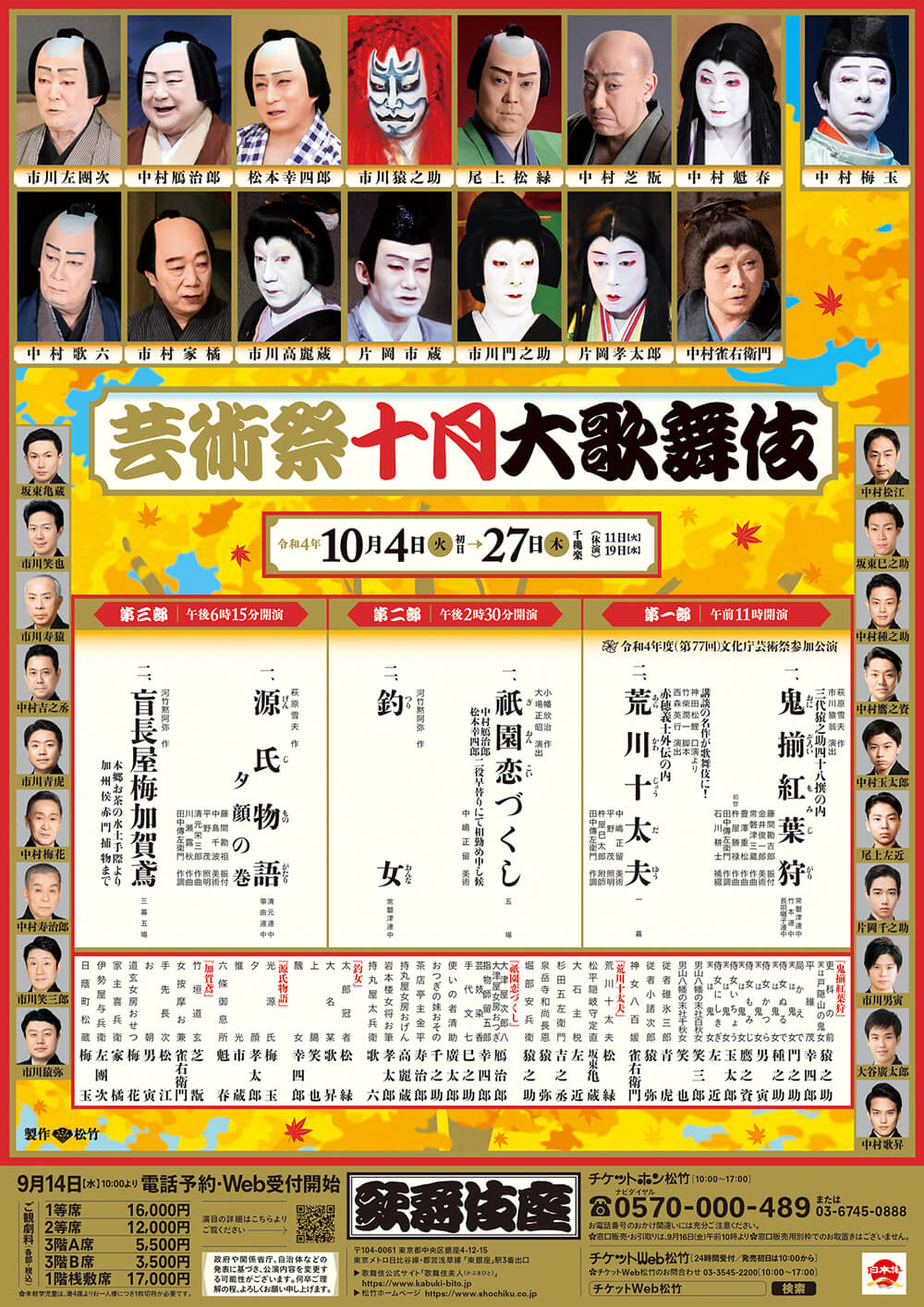 October Program at the Kabukiza Theatre

*Single Act Seats are not for sale.
*Tea will not be offered at the Box Seats.

In Part 1, a dance drama filled with variety featuring a beautiful princess who transforms into a demoness, and a Brand New Kabuki Production adapted from a masterpiece of Kōdan storytelling will be performed. In Part 2, you will see a 'sewamono' domestic play depicting pride and love in the two capitals of Kyoto and Edo, as well as a humorous dance drama in which a lord and his servant go fishing for partners. In Part 3, please enjoy a lyrical dramatization of the chapter 'Yūgao' from the 'Tale of Genji', and a masterpiece of the 'sewamono' category of domestic plays featuring a scoundrel in the city of Edo.

This is a dance drama by Hagiwara Yukio that is adapted from the Nō play 'Momijigari'. It includes a spectacular finale featuring a large group of demonesses.
While Taira no Koremochi, a warrior of the 10th century, is viewing the scarlet maple leaves on Mt. Togakushi in Shinano Province, he comes across a party of women accompanying the beautiful Princess Sarashina. She invites him to join her party and entertains him with a captivating dance, during which he is given so much saké that he becomes tipsy and dozes off. The Princess and her ladies-in-waiting reveal their true identities as demonesses.

The street in front of the Sengakuji Temple is bustling with people who come to celebrate the 7th anniversary of the death of the loyal retainers of Akō domain. Arakawa Jūdayū, a foot guard of the Matsudaira clan in Iyo Province, comes to visit the grave in fine attire which is unsuitable for a warrior of lower rank. Sugita Gozaemon, an inspector of the same clan who happens to be present, rebukes him for assuming a false rank which is a serious crime for a warrior. Later at court, as his lord Matsudaira Oki no kami interrogates him about the reason why he assumed a false rank, he begins to talk about the day when he acted as second for Horibe Yasubē, one of the loyal retainers of Akō domain, as he committed 'seppuku' ritual disembowelment and …

On his way back to Edo (today's Tokyo) from a pilgrimage to Ise Shrine, Tomegorō stays at the Ōtsuya in Kyoto, a store selling tea ceremony utensils. It is run by Jirohachi who has invited Tomegorō to stay because he is much indebted to Tomegorō's father, and also because it is just the time of the Gion Festival in Kyoto. Tomegorō falls in love at first sight with Osono, the sister of Jirohachi's wife Otsugi. Otsugi asks him to spy on Jirohachi to see whether he is in love with another woman. Since this spring, Jirohachi has often come home late at night. As Otsugi suspects, Jirohachi is head over heels in love with Someka, a geisha in Gion, but Someka has a patron and dislikes Jirohachi. Meanwhile, Osono asks Tomegorō to take her along to Edo; she is in love with Bunshichi, a clerk of the Ōtsuya. However, Otsugi doesn't know about their relationship and recommends that she marry the son of the Mochimaruya. She asks Tomegorō to help her elope with Bunshichi. In exchange for telling Otsugi the name of the woman Jirohachi loves, Tomegorō asks Otsugi to approve the marriage between Osono and Bunshichi. Hearing this, Jirohachi thinks that Tomegorō has talked them into humiliating him. Bearing a grudge against Tomegorō, they quarrel with each other. They are reconciled at last to hear that Mochimaruya Tahē has given up on getting Osono as his son's bride and approves the marriage between Osono and Bunshichi.

This is a dance drama based on a classical Kyōgen farce. A master longs for a wife and is told by the gods in a dream to go fishing for one. When he does so, he is united with a beautiful princess. His servant Tarōkaja wants a wife as well, but when he goes fishing, he gets stuck with a very surprising companion. This woman is played by an actor who specialises in male roles here playing a rare, humorous, female role.

['Yūgao' chapter from 'The Tale of Genji']

Hikaru Genji cannot get accustomed to his lawful wife Lady Aoi and finds peace of mind with other women. One day, while visiting the concubine of the Emperor's elder brother who lives in Rokujō, he becomes attracted to a woman who lives quietly in a house, on the fence of which a moonflower is in bloom. On the night of 15th August when a beautiful moon appears, he at last calls on her, led there by his follower Koremitsu. While he enjoys a moon-viewing party and dances with her, another suspicious woman thrusts herself between them and …

The masseur Takegaki Dōgen kills the farmer Tajiemon at the embankment of Ochanomizu and steals the money he possessed. Matsuzō, who happened to be passing by, picks up a tobacco pouch which Dōgen dropped. Dōgen hears that his niece Oasa received money from the Iseya pawn shop where she is an apprentice, and thinks of extortion. He visits Iseya with his lover Okane, a masseuse, and tries to extort 100 gold coins. But Matsuzō shows the tobacco pouch to Dōgen and they scuttle off. Finally, his evil deeds are discovered and pursuers are sent after him. In the end he is arrested before the front gate of the mansion of the Kaga Domain.