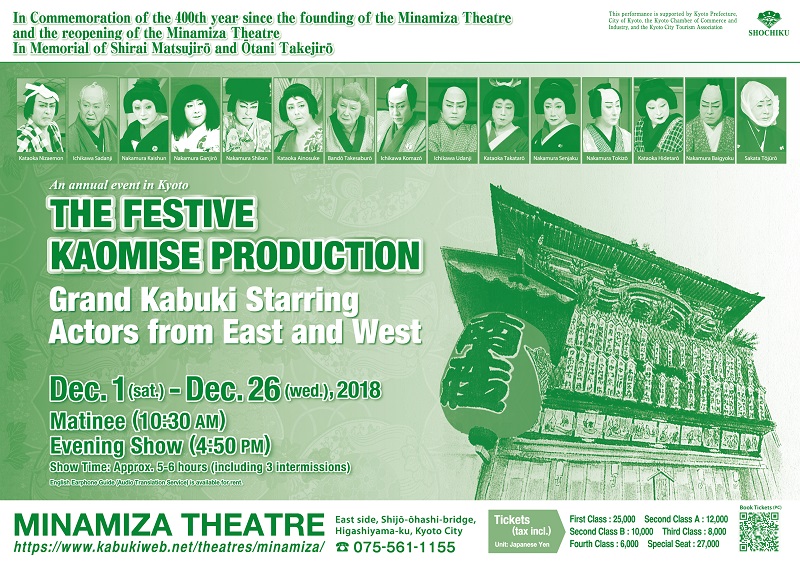 In the 400th year since the original theatre was licensed, the Kaomise Production is performed to commemorate the reopening of the recently refurbished Minamiza Theatre.
The ‘Kaomise’ (‘face-showing’) production which has been staged annually since the Edo period (1603-1868) is an all-star line-up and a big event for December in Kyoto. This month’s program is also held in memory of Shirai Matsujirō and Ōtani Takejirō, the founders of Shochiku Co., Ltd.

Takebe Genzō was Kan Shōjō's most gifted disciple. Kan Shōjō has been exiled and his family are in grave danger. Genzō runs a small school in the country and shelters Kan Shōjō's son and heir, Kan Shūsai, whom they are trying to pass off as their own son. However, word has gotten out that Kan Shūsai is at their school and Genzō has been ordered to behead him. Moreover, the retainer Matsuōmaru who knows Kan Shūsai's face is to come to inspect the head. Genzō's only hope is to kill one of the other students as a substitute. On that day, a new student named Kotarō who has a refined bearing arrives. Genzō takes the terrible decision to kill him in place of his lord's son..

[The Love Suicides at Mt.Toribe]

This play by 20th century playwright Okamoto Kidō mixes old and new kabuki styles. The samurai Hankurō is in love with the courtesan Osome. Visiting her one night in the pleasure quarters of Kyoto, he gets into a drunken quarrel and ends up killing his best friend' s brother in a fight. Knowing this is not something that can be forgiven, Hankurō decides to kill himself. However, Osome comes to him and says that she wishes to die together. Hankurō and Osome travel the road to death in new kimonos that ironically were made for them to celebrate the New Year together.

['Ninokuchi Village' from 'The Love Messenger to Yamato']

In danger of losing his lover, Umegawa, the money courier Chūbē breaks the seals on a package of money entrusted to him, even though this is a crime punishable by death. In this scene, they are on their way to commit lovers' double suicide. Before they meet their end, Chūbē wishes to take Umegawa to his hometown. The couple go through the snow-covered landscape when Chūbē's father Magoemon passes by. Chūbē and Umegawa hide themselves, but when Magoemon slips Umegawa runs out to help him...

['A Tree Nut', 'The Death of Kokingo' and 'The Sushi Shop' from 'Yoshitsune and the Thousand Cherry Trees']

Konomi [A Tree Nut]
Kokingo Uchijini [The Death of Kokingo]
Wakaba no Naishi, the wife of the Heike commander Koremori, travels with her young son and their retainer Kokingo, searching for her husband. After the war against the Genji, Koremori is now on the run. While resting at a small tea house, they are met by Gonta, a local bully, who skillfully swindles them out of their money. Later, they are set upon by Genji forces and in a spectacular fight scene, Kokingo sacrifices himself to save his mistress and her son.

Sushiya [The Sushi Shop]
With his clan defeated, Koremori now lives with Yazaemon's family disguised as Yasuke, a humble apprentice. Yazaemon runs a sushi shop and owes Koremori's father Taira no Shigemori a debt of gratitude. As it happens, Yazaemon is also Gonta's father. Not knowing Yasuke's true background, nor that he already has a wife and child, Yazaemon`s daughter innocently falls in love with Yasuke. One day, Gonta comes to the house. A short while later, Koremori's wife and child also appear miraculously at the sushi shop searching for a place to spend the night. Finding out that Yasuke is actually Koremori and knowing of the bounty on his head, Gonta hands the head together with Koremori's wife and daughter over to the Genji commander. Furious at his son, Yazaemon stabs him. Before he dies, however, Gonta reveals that he only pretended to kill Koremori. In fact, he sacrificed his own wife and son to save the real Koremori and his family.

[A Child with a Mask]

This is a dance portraying a little boy at his games. An adult kabuki actor will depict skillfully the innocent cheerfulness of a child. He first dances showing how he plays usually, but will then put on the mask of a monkey, pretending to be one himself. However, as the lyrics mention about a horse, he pulls together the reigns and shows the movements of riding a horse. This dance is rarely performed.

Two fishermen are casting nets over the Sumida river. This illustrates the legend of the origins of the Asakusa Temple, where two brothers fished a statue of the Buddhist deity Kannon out of the water. As the two perform a light-hearted dance, a cloud suddenly appears and they lose consciousness. When they wake up again, they are each possessed by the spirit of "good" and the spirit of "evil". They start to dance again...