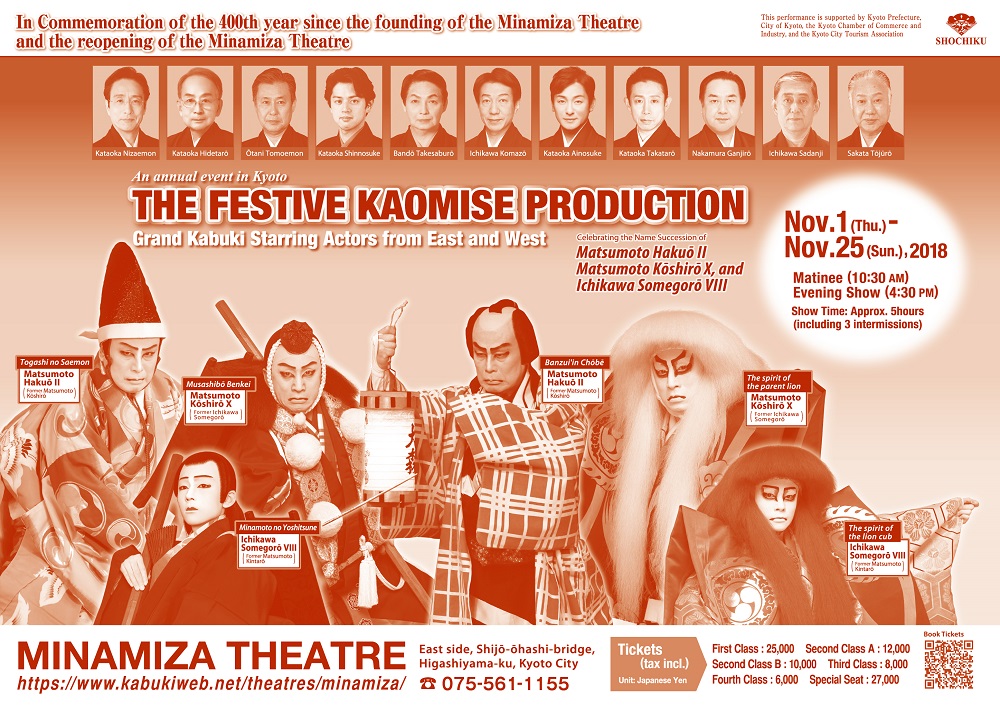 November at the Minamiza Theatre

[In Commemoration of the 400th year since the founding of the Minamiza Theatre and the reopening of the Minamiza Theatre
An Annual Event in Kyoto
THE FESTIVE KAOMISE PRODUCTION
Grand Kabuki Starring Actors from East and West]
In the 400th year since the original theatre was licensed, the Kaomise Production is performed to commemorate the reopening of the recently refurbished Minamiza Theatre.
The ‘Kaomise’ (‘face-showing’) production which has been staged annually since the Edo period (1603-1868) is an all-star line-up and a big event for December in Kyoto. This month’s performance will also commemorate the Name Succession of Matsumoto Hakuō II, his son Matsumoto Kōshirō X, and his grandson Ichikawa Somegorō VIII.

A princess has a mysterious ailment that makes her hair stand on end, an ailment that prevents her from going ahead with her long-awaited marriage. Kumedera Danjō comes from the groom's household to investigate and, when his tweezers mysteriously float up in mid-air, he discovers a secret plot. This is one of 'The Eighteen Favorite Kabuki Plays.' This collection mostly features plays with the bombastic 'aragoto' style of acting, but 'Kenuki' is an urbane, witty detective story that unfolds in a world of fantasy. It displays the spirit of early kabuki.

[ 'The Father and Son Shishi Lions' ]

This dance, based on an old legend, describes a parent 'shishi', a lion-like spirit, which kicks its cub down to the bottom of a ravine. It does this because it will only nurture strong cubs that are able to climb up on their own. Later, the 'shishi' father and son appear in their true forms and perform the wild shaking of their long manes.

The courtesan Umegawa and the money courier Chūbē are characters in one of the most famous plays by Chikamatsu Monzaemon, 'Fūinkiri'. The distinctive acting style is also representative of the Kamigata region (Kyoto/Osaka). In the pleasure quarters, the most important possessions were money and reputation. In danger of losing his lover, the courtesan Umegawa, the money courier Chūbē breaks the seals on a package of money entrusted to him after being taunted by a rival, even though the use of such money is punishable by death.

The young lord Maeno Sajima comes to Arima hot springs with his lover Tsukasa. Sajima witnesses Tsukasa falling in love with a barber called Goroshichi and becomes mad with jealousy. Sajima sends a forged love letter to Goroshichi that appears to be in Tsukasa's handwriting, and which invites him to visit her in secret. Goroshichi is overjoyed and, that night, sneaks into the inn and gets arrested. Just as he is accused of being a thief, Sajima's chief retainer Jirōdayū appears to expose Sajima's plot and save Goroshichi. He discovers that, in fact, he is not a mere barber. Goroshichi is, in reality....