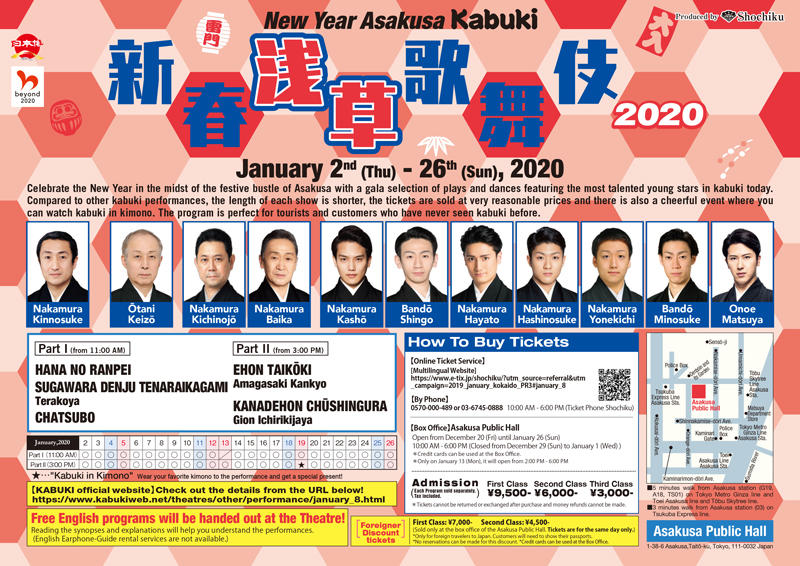 *No Part 1 on the 13th.
*Part 2 on the 19th will be 'Kabuki in Kimono', a performance where customers are recommended to wear kimono.

[Foreigner Discount tickets]
First Class: 7,000 / Second Class: 4,500
Unit: Japanese Yen (tax included)
*Sold only at the box office of the Asakusa Public Hall.
*Tickets are for the same day only.
*Only for foreign travelers to Japan. Customers will need to show their passports.
*No reservations can be made for this discount.
*Credit cards can be used at the Box Office.

Celebrate the New Year in the midst of the festive bustle of Asakusa with a gala selection of plays and dances featuring the most talented young stars in kabuki today. Compared to other kabuki performances, the length of each show is shorter, the tickets are sold at very reasonable prices and there is also a cheerful event where you can watch kabuki in kimono. The program is perfect for tourists and customers who have never seen kabuki before.

This is a dance adaptation of Act IV of YAMATOGANA ARIWARA KEIZU, commonly known as RANPEI MONOGURUI ('The Madness of Ranpei') which is sometimes performed in kabuki. The footman Ranpei goes mad at the sight of anaked blade. After losing consciousness, he is awoken by his comrades and suddenly gets up and dances madly in a comical manner.

Takebe Genzō was a loyal retainer of Kan Shōjō, a former imperial minister. Genzō and his wife Tonami now run a small school in the country and are sheltering Kan Shōjō's son and heir, Kan Shūsai. However, Genzō has been ordered to behead Kan Shūsai. Moreover, the retainer Matsuōmaru who knows Kan Shūsai's face is to come to inspect the head. Seemingly by chance, a new student named Kotarō arrives that day who has a more refined bearing, and Genzō takes the terrible decision to kill him in place of his lord's son. Matsuōmaru inspects the head and, surprisingly, confirms it to be that of Kan Shūsai. As it turns out, Matsuōmaru had sent his own son to be sacrificed...

This is a dance adapted from a Kyōgen comedy. Magoroku, a simple man from the country, is on his way back from Togano'o where he packed his tea canister with tea leaves. He is drunk and decides to take a nap with the tea cannister strapped to his back. When the thief Kumataka Tarō tries to steal it, Magoroku notices and stops him. However, Kumataka also insists that the tea canister is his own. The local magistrate questions both, but Kumataka copies Magoroku and says the exactly same thing repeatedly...

This is a 'jidaimono' history play portraying General Akechi Mitsuhide's life after his rebellion. Mitsuhide has killed his lord Oda Harunaga and taken over the country, but after a few days, he is in danger of losing all that he has gained to his rival general Hisayoshi. Mitsuhide intends to attack Hisayoshi with a bamboo spear, only to find that he has fatally wounded his own mother. His mother and wife reprimand him for the disloyal act of killing his lord, but he refuses to repent. His will of steel is only broken when his son arrives to report on the battle and dies from his injuries.