The Festive Kaomise Production at the Other Theatres||KABUKI WEB 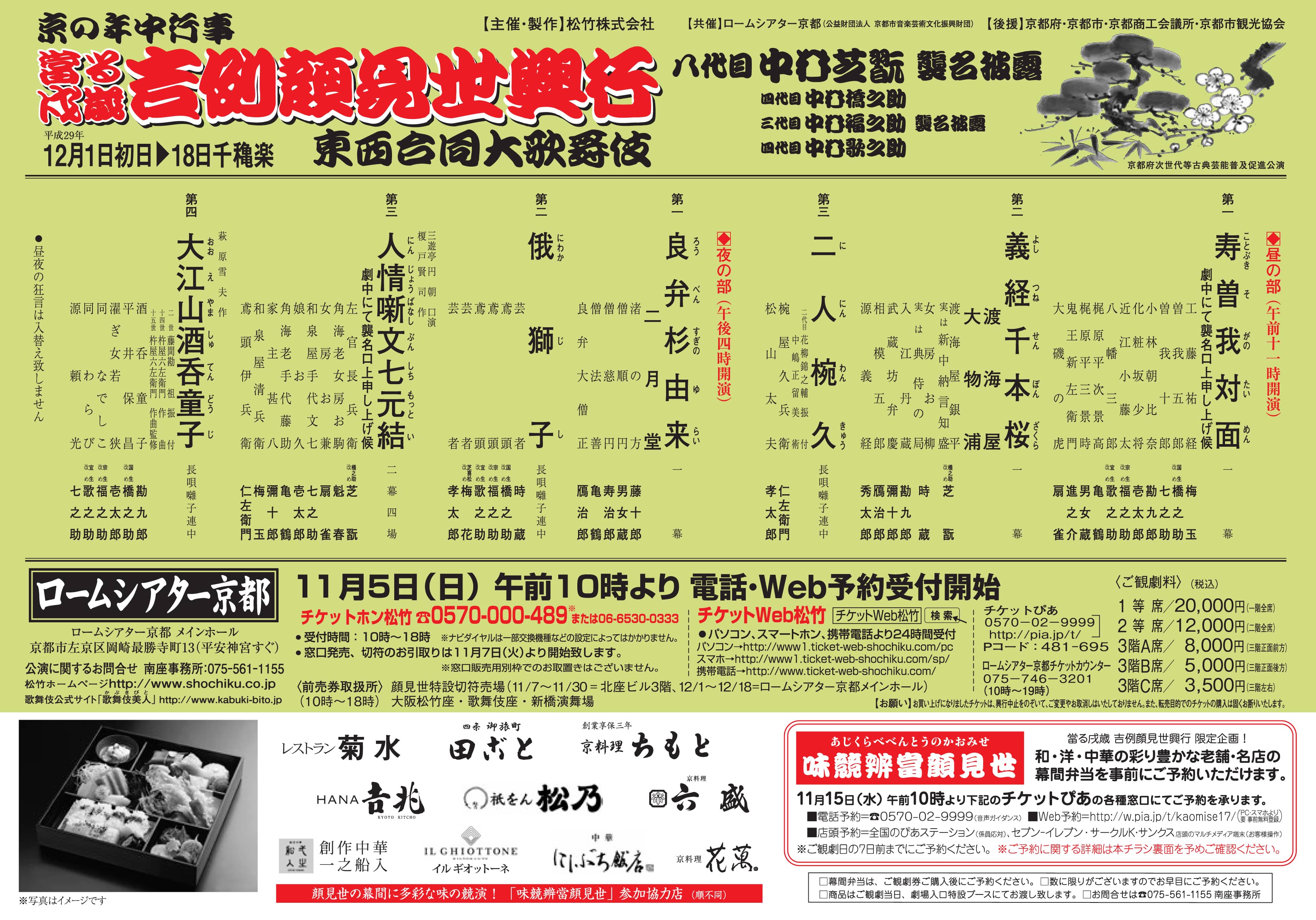 [An Annual Event in Kyoto
The Festive Kaomise Production
Grand Kabuki Starring Actors from East and West]
In the Edo Period, ‘kaomise’ (‘face-showing’) originally referred to the month in which a theatre showed the actors who were newly contracted for the following year to the audience. Today it is an all-star performance and a big event for December in Kyoto.
This month’s performances will also commemorate the Name Succession of Nakamura Shikan VIII and his three sons, Nakamura Hashinosuke IV, Nakamura Fukunosuke III and Nakamura Utanosuke IV.

With a Stage Announcement during the play

Presented this month are two scenes from 'Yoshitsune and the Thousand Cherry Trees', one of the greatest classics of the puppet theatre, which has also become a classic of kabuki. It is a 'jidaimono' history play portraying the life of General Minamoto no Yoshitsune during the 12th century civil wars between the Genji and the Heike clans.
After recent battles, the Genji are victorious and their leader Yoritomo is now shōgun. But there is a falling out between Yoritomo and his brother Yoshitsune, the brilliant general responsible for their victory. As a result, Yoshitsune is fleeing through the country from his brother's forces, and this play fancifully has him encounter several famous warriors from the Heike clan who, despite the historical truth, are not yet dead.
Yoshitsune books passage on a boat to Kyūshū, but the captain is actually Taira no Tomomori, a general of the Heike clan that Yoshitsune helped to defeat. Tomomori was supposedly killed by Yoshitsune in the final battle of the war, but in this play Tomomori is shown surviving, living in disguise with the child emperor Antoku and his nursemaid. At first, the captain is a gallant commoner but soon he reveals himself to be Tomomori, a high-ranking general close to the emperor. His wife, as well, is first a cheerful commoner who then shows her true identity as a high-ranking lady-in-waiting dressed in the magnificent robes of the imperial court, for she is actually the Emperor's wet nurse. Tomomori uses this opportunity to try to take his revenge on Yoshitsune but is defeated again. Finally, Tomomori fastens the rope of a giant anchor around his body and plunges to his death in the sea.

This is a dance portraying the love of Wan'ya Kyūbē, a rich merchant in Osaka, for a courtesan named Matsuyama. It is based on a real incident that occurred in the Edo period.
Kyūbē has been deeply in love with Matsuyama and was meeting her so often that his family became worried, finally confining him in a room in his shop. He loses his mind and escapes from his shop and goes looking for Matsuyama. He wanders off wearing a Japanese beret and dozes at the root of a pine tree. Then, Matsuyama appears to him in his dream. They merrily dance together, but before long she disappears. Left alone, he realizes that she was only an illusion. He falls to the ground and begins to weep.

Though this is a jidaimono play, a history play set in the Nara era (8th century), its theme of parental affection is universal.
The priest Rōben of Tōdai-ji Temple makes a point of worshiping the tall cedar tree beside the Nigatsu-dō Hall every day. In fact, in his childhood he had been abducted by a giant eagle that eventually dropped him on this tree. He was found there, and after years of ascetic training he has now risen to great status. One day, when he comes before the tree, the priest Rōben encounters an old woman with a shabby appearance who says she has gone to ruin after she had her son stolen away. She turns out to be none other than his mother Nagisa.

From the late Edo to the Meiji period, an event called 'Niwaka' took place in September in the pleasure quarters where geishas and jesters performed improvised dances. This is a lively dance which might be shown at such an opportunity evoking the atmosphere of an Edo period festival. The highlight of the piece is the lion dance performed by two handsome young men of the neighborhood.

Adapted from a classical Rakugo story by Sanyūtei Enchō, this play shows the gallant spirit of the commoners of Edo.
Chōbē spends his days and nights gambling, but finally realizes his family's problems when his daughter takes a job in the pleasure quarters. Having received the money for her contract, he reveals his good heart by saving Bunshichi who is about to commit suicide. Chōbē feels sorry for Bunshichi and finally gives him the money. Returning home, nobody believes Chōbē, thinking instead that he has gambled the money away. Then, Bunshichi and his master Seibē come to Chōbē's home, and reveal the truth.

This is a dance drama adapted from the legend of Shutendōji, a demon which loves drinking and lives on Mt. Ōe.
Every night, Shutendōji abducts women from the capital and devours their flesh during the day. Ordered to slay this monster, Minamoto no Yorimitsu goes to Mt. Ōe with his retainers disguised as mountain priests. The demon appears in the shape of a child, and Yorimitsu offers him sacred saké which is said to take away the divine powers of the drinker. The child drinks this saké and dances around, eventually becoming completely drunk. The washerwomen Wakasa, Nadeshiko and Warabi who were abducted by the demon appear and talk about their hardships on Mt. Ōe. Soon, the child reveals its true identity as the demon, but it has already lost its divine powers. At last, Yorimitsu and his retainers are able to slay the demon and return to the capital in triumph.