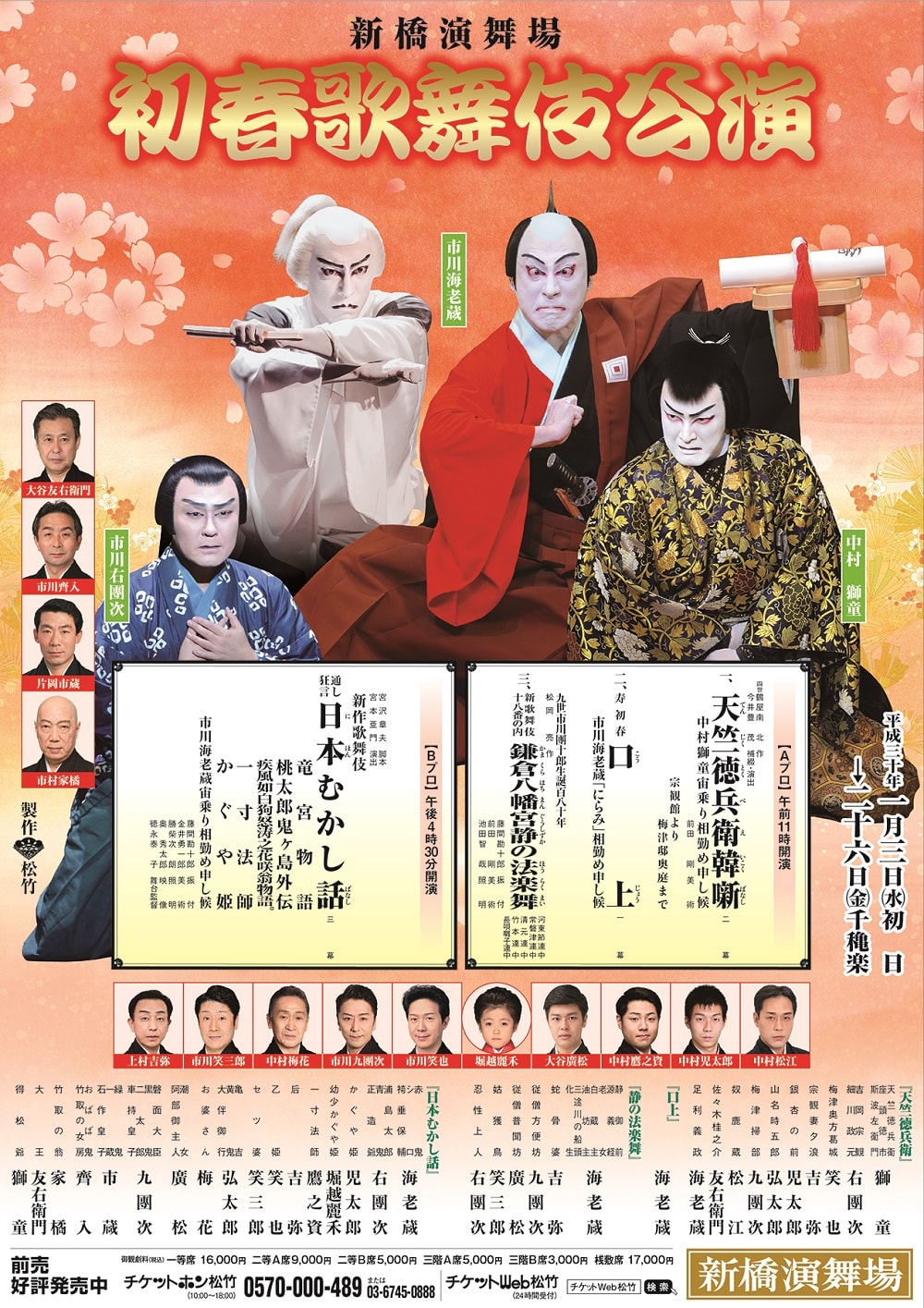 The New Year Program at the Shinbashi Enbujo Theatre is filled with exciting highlights both in Program A and Program B. Program A opens with a daring and novel work featuring a sorcerer who has mastered toad magic. What follows next is a stage announcement celebrating the New Year including a special pose called ‘nirami’ (a glare) which is said to drive away evil spirits. Commemorating the 180th anniversary of the birth of Ichikawa Danjūrō IX, Program A ends with a revival of one of the Shin Kabuki Jūhachiban, ‘The New 18 Favourite Kabuki Plays’ that were chosen by Danjūrō IX to represent the best of his acting family. Program B is a new kabuki production based on various Japanese folk tales that have been popular from long ago.
Enjoy a merry program of works typical for the New Year and featuring the young stars Ichikawa Ebizō, Nakamura Shidō and Ichikawa Udanji.

This is a 'jidaimono' history play set in the Muromachi period (approx. 1336-1573). It is a play on a grand scale about Tenjiku Tokubei, a man who plans to overthrow Japan with the help of toad sorcery. The play was written by Tsuruya Nanboku IV, and includes many spectacular effects such as a giant toad, collapsible stage sets, quick changes, a flight through the air, and so on. Sasaki Katsuranosuke goes to the mansion of his retainer Yoshioka Sōkan in search of an heirloom sword named 'Namikirimaru' which has been stolen. A boatman named Tokubei who has been to India appears and entertains Katsuranosuke for a while with his adventures. When he hears that the envoy of the shogun has come, he conceals himself. Sōkan commits ritual suicide by disembowelment to atone for the escape of his lord Katsuranosuke. He discloses to Tokubei that he is, in reality, Mokusokan, who plans to restore the Ming dynasty....

A 'kōjō' is a special greeting and stage announcement made by actors directly to the audience. In Program A at the Shinbashi Enbujō Theatre in January, Ichikawa Ebizō will make one such 'kōjō' announcement which will include a special glaring pose called 'nirami'. It is said that if you see the kabuki 'nirami', you won't catch a cold for the whole year. Please enjoy an act perfect to celebrate the New Year.

Shizuka Gozen
Minamoto no Yoshitsune
An Old Woman
Hakuzōsu
Aburabōzu
A boatman on the River of the Dead
Keshō, a mighty demon

This dance is included as one of the 'Shin Kabuki Jūhachiban', 'The New 18 Favourite Kabuki Plays' that were chosen by Ichikawa Danjūrō IX. Danjūrō IX was praised as a 'gekisei' (Holy Actor). This work has been reconceived for this occasion. 5 types of kabuki music will be performed together in this dance play.
The Priest Ninshō and his attendants visit a desolate temple in Kamakura because he has heard a rumor that a specter is appearing there every night. Suddenly, a threatening wind blows and an old woman appears. As she says she was a court dancer in days gone by, they ask her to perform a dance. After she disappears and they go into the inner room, specters gather one by one and....

[ Old Japanese Tales - 'The Dragon Palace Story', 'The Peach Boy at Onigashima Island', 'A White Dog and the Old Man Who Made Cherry Trees Bloom', 'The One-Inch Boy' and 'Princess Kaguya' ]

This is a new kabuki production adapted from folktales and nursery tales that are familiar to all Japanese. It was created out of the desire to make a kabuki play that anyone, from children to adults, could enjoy. The script was written by Miyazawa Akio who is active in many genres, and it was directed by Miyamoto Amon, one of the greatest directors in Japan. One night, a grandmother begins to tell some children a mysterious story which begins on a distant star. A wonderful stone which is the symbol of happiness goes missing, and in despair, the empress of that star pins all her hopes for its retrieval on her new-born daughter. Eventually, the daughter lands on the blue earth where she comes across characters and scenes from familiar Japanese folktales: Urashima Tarō and Lady Otohime in the Dragon Palace, the Peach Boy who defeats ogres, a White Dog and the Old Man who made Cherry Trees bloom, the One-Inch Boy and Princess Kaguya. How will this tale concerning the wonderful stone, interwoven with so many people and animals conclude?