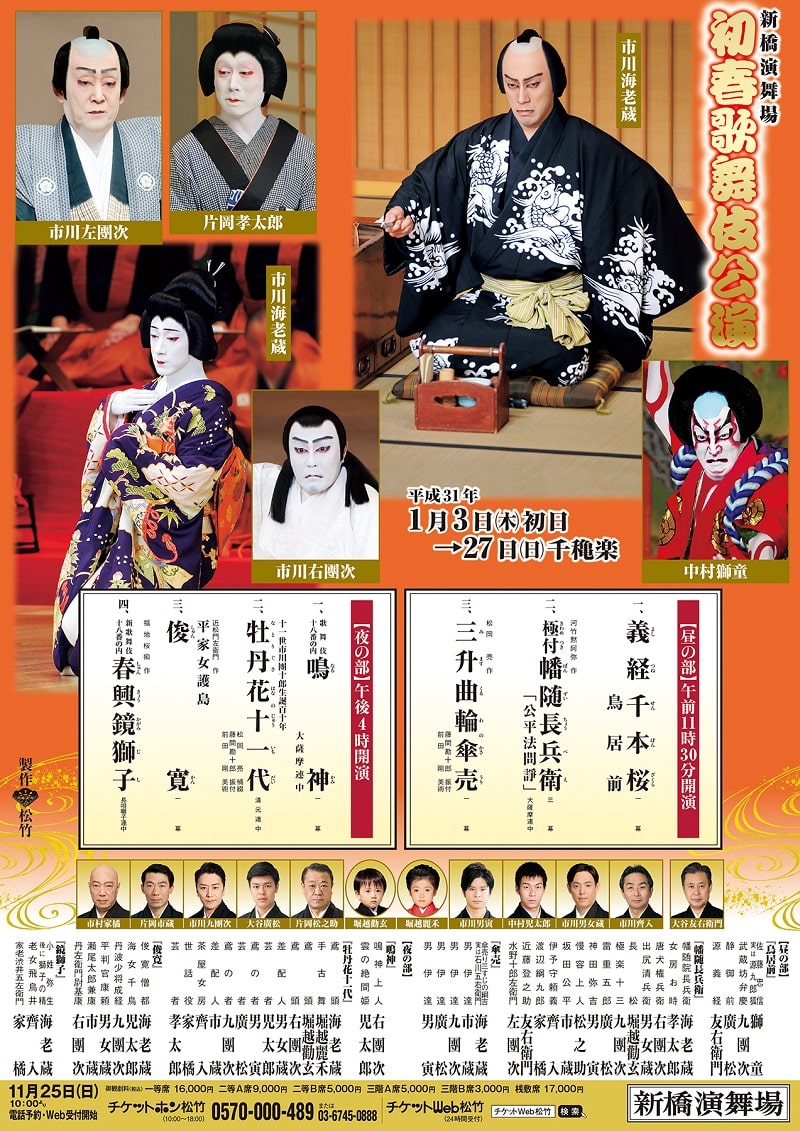 This program features Ichikawa Ebizō, one of the stars of the younger generation. ‘KIWAMETSUKI BANZUI CHŌBĒ’ in the Matinee makes you feel as though you were in the theatre of the Edo Period. ‘SHUNKAN’ which will be performed in the Evening Show, will make us feel keenly the sorrow of a man left alone on a deserted island. Ichikawa Ebizō will also be performing two dances. The entire program is spectacular and very suitable for the New Year.

Yoshitsune is forced to flee from the troops sent by his brother Yoritomo. As the journey will be hard, he decides he must leave behind his lover Shizuka Gozen. While Yoshitsune visits the shrine, Shizuka is attacked by enemy men, but she is rescued by the timely arrival of Yoshitsune's retainer Tadanobu, who is actually a magical fox in disguise. The fox Tadanobu longs for the hand drum which is made from its parents' skins.

In the early Edo period, gallant men like Banzui'in Chōbē were leaders among the ordinary townspeople. But this incurred the wrath of members of the samurai class, who were theoretically in control. This play begins with a recreation of kabuki in its earliest days. Before long, a fight breaks out which is settled by Chōbē, but this frustrates the samurai Mizuno, who invites Chōbē to visit his mansion. All of Chōbē's men tell him not to go because it is a trap, but Chōbē decides to meet his end and bids farewell to his wife and son.

['The Umbrella Pedlar in the Pleasure Quarters']

A popular umbrella pedlar named Misuji no Tsunakichi, in reality the thief Ishikawa Goemon, appears on the main street in the Yoshiwara Pleasure Quarters where cherry blossoms are in full bloom. He displays excellent tricks when he takes out umbrellas one after another detailing their types and origins at the same time.

One of the oldest plays in the kabuki repertory, 'Narukami' combines the bombastic 'aragoto' acting style with the universal theme of human frailty and desire depicted with the earthy comedy of early kabuki. Angry at the imperial court, the priest Narukami imprisons the rain god, bringing a severe drought. Princess Kumonotaema comes as a spy to seduce Narukami and break his power. When Narukami realizes that he has been betrayed, his anger transforms him into a thunder god.

['The Flowery 11th Danjūrō with his Peony Crest']

This is a brand-new dance commemorating the 110th anniversary of the birth of Ichikawa Danjūrō XI.
A handsome fireman chief and a chic and vivacious geisha appear in town as the air resounds with festival music. A sweet 'tekomai' dancer and other firemen chiefs join them and all perform a lively and spirited dance.

['The Priest Shunkan' from 'The Heike and the Island of Women']

The priest Shunkan has been exiled to 'Devil's Island' for plotting against the dictator Kiyomori. A pardon is given to his fellow conspirators and Shunkan. However, as he hears that his wife has died in Kyoto, Shunkan gives up his place on the boat to freedom so that his companion's new wife can accompany her husband back to the capital. The boat leaves and Shunkan is left watching it disappear in the distance, knowing he will be left on the island forever.
Enjoy this masterpiece of the 'jidaimono' history play category.

['Young Yayoi and the Spirit of the Lion']

Yayoi, maidservant, later, the Spirit of the Lion
Ichikawa Ebizō

The maidservant Yayoi performs an auspicious lion dance for the shogun in his opulent palace, but she gradually finds herself under the control of the lion spirit. In the second half of the dance, the lion spirit itself appears and performs its frenzied dance among peonies and fluttering butterflies.