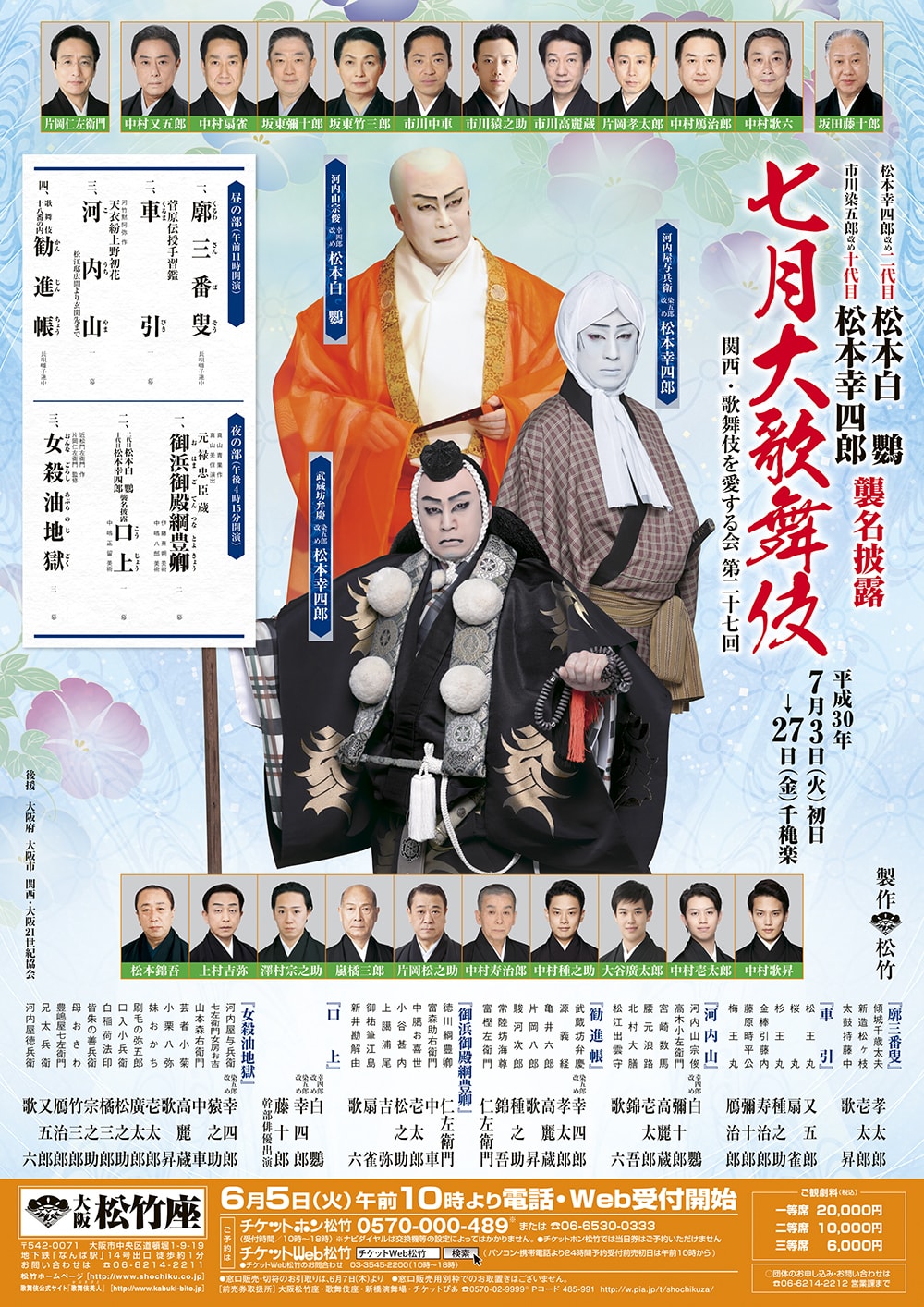 This month’s performances commemorate the name succession of the former Matsumoto Kōshirō who has taken the new name Matsumoto Hakuō II, and his son the former Ichikawa Somegorō who has succeeded to the name Matsumoto Kōshirō X. In the Matinee, Matsumoto Hakuō plays one of his most celebrated roles in ‘KŌCHIYAMA’, while his son Matsumoto Kōshirō stars in ‘KANJINCHŌ, one of the specialties of their acting house. In the Evening Show, there will be a stage announcement in which the two actors announce their name succession along with other top-ranking actors, and Kōshirō will star in ‘ONNA GOROSHI ABURA NO JIGOKU’, a play which takes place in Osaka.

[ Sanbasō in the Pleasure Quarters ]

'Sanbasō' is an auspicious dance based on the play 'Okina' from the classical Noh theatre. It usually features an old man who is actually a god, his attendant Senzai, and the energetic Sanbasō. In this version, however, a beautiful top-ranking courtesan appears in place of the old man, an apprentice courtesan in place of the old man's attendant Senzai, and a taikomochi entertainer instead of Sanbasō.

[ The Fight Over the Carriage - From Sugawara's Secrets of Calligraphy ]

Umeōmaru and his triplet brother, Sakuramaru, try to get revenge on Fujiwara no Shihei who falsely accused Umeōmaru's lord of treason. However, they are confronted by their other brother, Matsuōmaru, who is one of Shihei's retainers. This energetic play is a showcase for the bombastic 'aragoto' style of acting.

The 'tea-ceremony priest' Kōchiyama is a skilled extortionist and he is now working on another scheme to obtain money. He disguises himself as a high-ranking priest in order to gain the freedom of a girl captured by a powerful samurai lord because she will not become his mistress. During his heated discussions, in which the actor speaks the famous poetic cadences of the late 19th century playwright Kawatake Mokuami, Kochiyama not only succeeds in his mission to rescue the girl but manages to extort a fair amount for himself.

After Asano Takuminokami attacked and wounded Kira Kōzukenosuke within the shogun's palace in 1701, he was ordered to commit ritual suicide, his domain was confiscated and his retainers all became masterless samurai. A group of these masterless samurai planned to avenge their lord's death by killing the man they held responsible, Kira. The story takes place the following year. Lord Tokugawa Tsunatoyo is holding a beachside party. Learning that Kira will attend this party, one of the masterless samurai, Tominomori Suke'emon, asks to observe from a distance. However, he hears from Lord Tsunatoyo that the Asano family will soon be reinstated, which means there will be no more reason for revenge. However, he ambushes Kira and makes his attack. The story focuses on the meanings of revenge.

[The Woman Killer and the Hell of Oil]

This play by the great Chikamatsu Monzaemon was virtually ignored at the time it was written but it has become phenomenally popular in modern times for its hard-boiled sensibility and sensuous killing scene in which the protagonists slip and struggle through puddles of spilled oil. Yohē, the son of the oil shop Kawachiya is living a life of debauchery. He starts a fight in town and incurs debts at the pleasure quarters, and even hits his own stepfather and sister. Not being able to take this any longer, his mother finally disowns him. Troubled by this and needing to pay back the debts, he tries to borrow money from the wife of a neighboring oil merchant. He tries to blackmail her, but rejected, he ends up killing her.