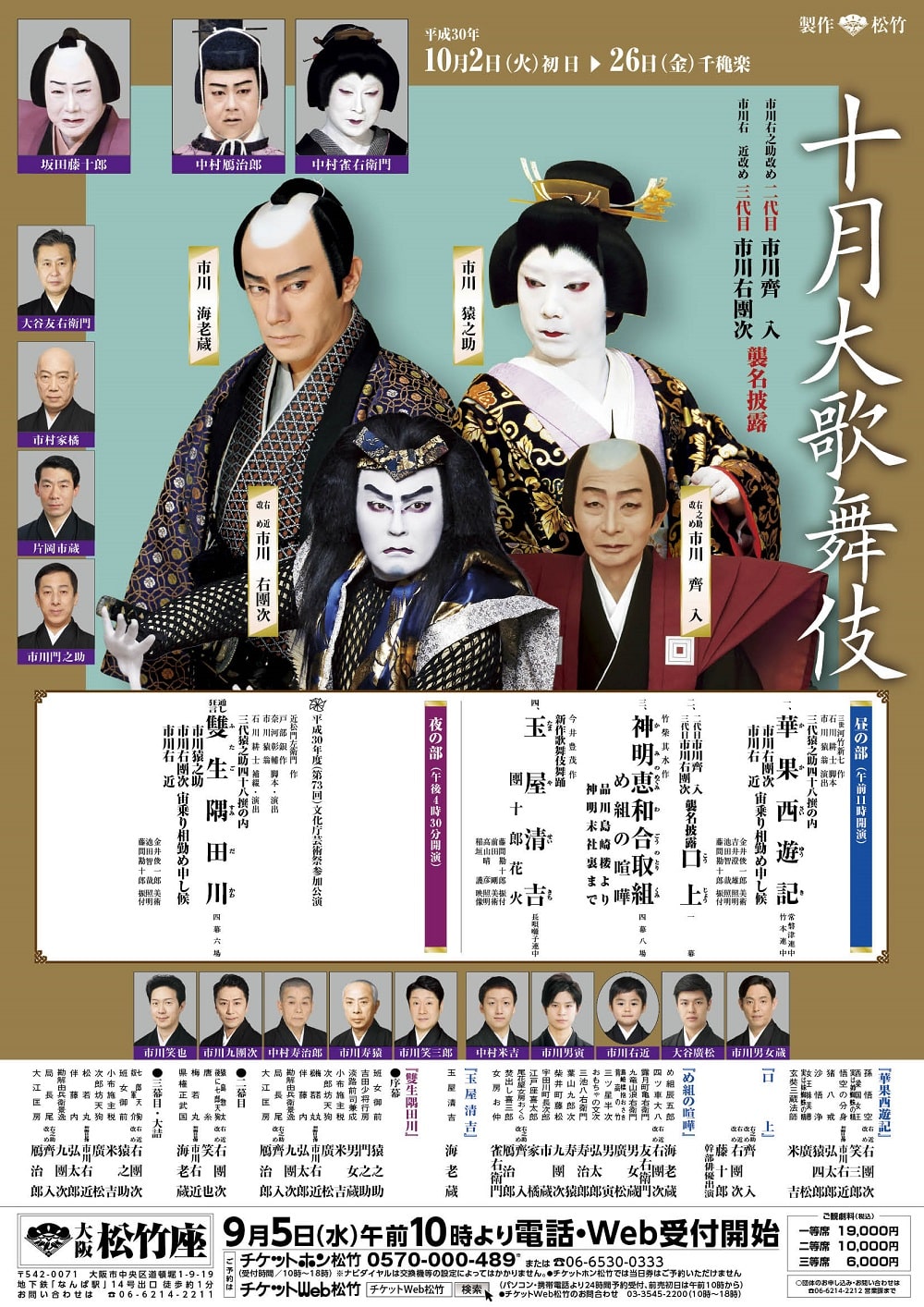 October at the Osaka Shochikuza Theatre

This month’s performance is to commemorate the Name Succession of Ichikawa Sainyū II and Ichikawa Udanji III, names which both have a strong connection with Ōsaka. The new Ichikawa Udanji performs in ‘Kaka Saiyūki’ [Journey to the West] in the Matinee, and in the full-length play ‘Futago Sumidagawa’ [Sumida River and the Twins] in the Evening Show, both of which were extensively revised by Udanji's master Ichikawa Ennosuke III to include a great amount of exciting stage trickery ('KEREN'). Also in the Matinee will be a Stage Announcement by the two actors succeeding to these new stage names.

One of the most popular Chinese classics is the story of the Journey to the West, about a Buddhist priest that traveled along the Silk Road from China to India to collect Buddhist scriptures. He is accompanied by a magical monkey spirit and some other creatures who protect him as they encounter all sorts of hazards on their journey. This play shows the group as they meet a beautiful princess, who is actually the spirit of a spider. Udanji's great master Ennosuke III revived this work and his version was a sensation that included all kinds of stage tricks.

Actors' stage names have been handed down from generation to generation throughout Kabuki's long history. This month Ichikawa Unosuke succeeds to the name of Ichikawa Sainyū and Ichikawa Ukon succeeds to the name of Ichikawa Udanji. There is a close relationship between the stage and the audience in kabuki and this is shown by these ceremonial stage announcements where the top stars of the company address the audience directly.

This brand-new dance staged with a cutting-edge technique for image projection will be performed for the first time this month. Fireworks lit up night sky in Edo (the old name for Tokyo). Seikichi dreams of becoming the best pyrotechnician in the city and works on various ways to develop and expand his fireworks to please people of Edo.

[ Sumida River and the Twins ]

<The Third Act and The Final Act>

This is a spectacular 'jidaimono' history play written by Chikamatsu Monzaemon and based on a tragic legend about twins and their mother in the Heian era (10th century). Incurring the enmity of Jirōbō Tengu, Yoshida no Shōshō Yukifusa's son Matsuwakamaru is kidnapped and he himself is killed. Yukifusa, who plots to take over the Yoshida clan, persuades Matsuwakamaru's twin brother Umewakamaru to draw the eyes on the carp in a scroll painting that he took from the Imperial Court. With its eyes painted in, the carp comes to life and jumps out of the scroll, after which Umewakamaru goes into hiding. Sarushima Sōta, who was once a retainer of the Yoshida clan, makes a living as a slave trader to compensate for the gold coins he embezzled from his lord. He beat a boy to death only to learn later that the boy was Umewakamaru. He commits suicide by disembowelment, becomes Shichirō Tengu and vows to restore the Yoshida clan. Hanjo Gozen wanders in search for her son Umewakamaru. Hearing that Umewakamaru is dead, she is about to throw herself into the river when she reunites with Matsuwakamaru. Shichirō Tengu flies away with Hanjo Gozen and Matsuwakamaru to the capital.