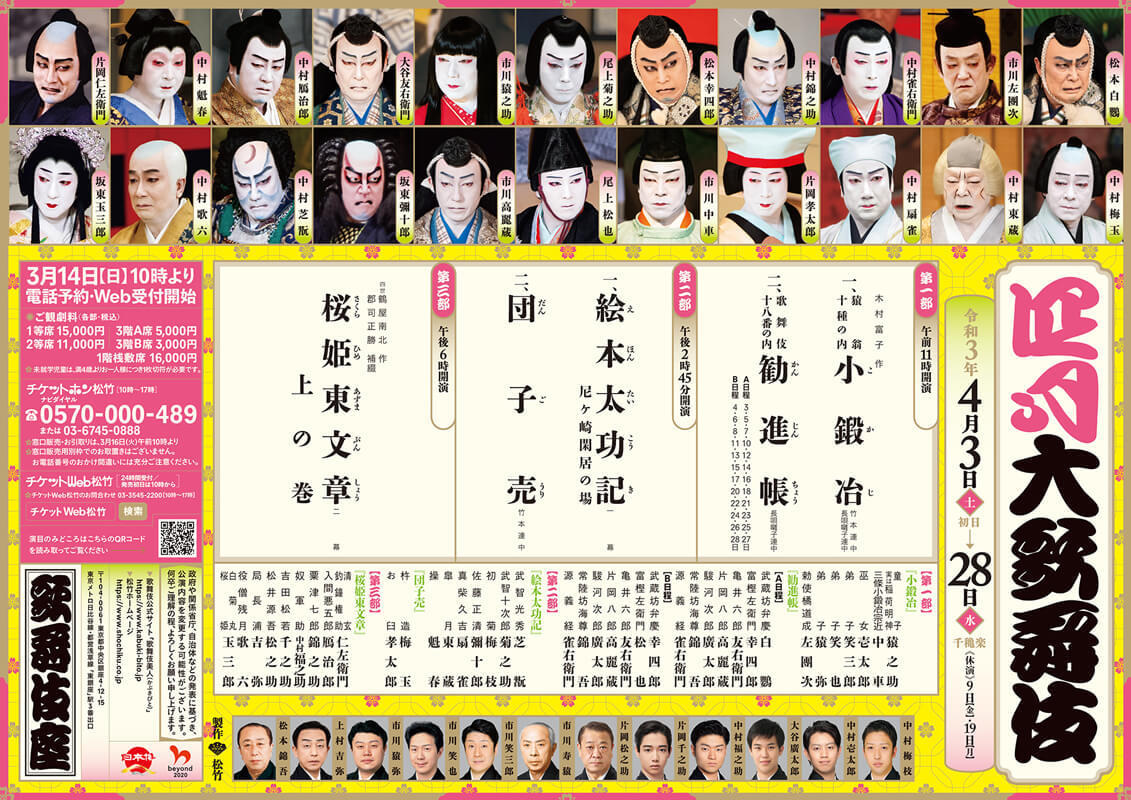 *No performances on the 9th (Fri) and the 19th (Mon).
*The theatre will open 40 minutes before the performance starts.

In April you can enjoy masterpieces of kabuki in every part of the program.
In Part 1 you can see a dance piece where the highlight shows how a swordsmith forges a sword brilliantly with the help of the great god of harvests. In the next item, the hero Musashibō Benkei is seen in a representative work of the ‘aragoto’ acting style which is also a specialty of the Kōraiya acting house. The role will be played alternately, either by Hakuō in Schedule A, or by Kōshirō in Schedule B.
In Part 2 you can see a history play accompanied by the impressive Gidayū Narrative Ensemble. The play depicts the tragic events which happen in the family of a warrior who rebelled against his lord. This will be followed by a flowery dance portraying a loving couple in perfect harmony.
In Part 3 you can see a popular and fantastic play by the famous playwright Tsuruya Nanboku, performed by Nizaemon and Tamasaburō.

A swordsmith named Munechika prays at the Inari Shrine for a person who will forge a sword with him. Then the great god appears in the form of a child, but in reality it is a fox. Munechika finishes forging the sword dancing dynamically with the fox in the figure of the great god.

This is a 'jidaimono' history play portraying General Takechi Mitsuhide's life after his rebellion. Mitsuhide has killed his lord Oda Harunaga and taken over the country, but after a few days, he is in danger of losing all that he has gained to his rival general Mashiba Hisayoshi. Mitsuhide intends to attack Hisayoshi with a bamboo spear, only to find that he has fatally wounded his own mother. His mother and wife reprimand him for the disloyal act of killing his lord, but he refuses to repent. His will of steel is only broken when his son arrives to report on the battle and dies from his injuries.

This dance with Gidayū music portrays a couple making and selling rice dumplings on the streets. They demonstrate how they make the rice dumplings in a lively way. The making of rice dumplings is often associated with the prosperity of one's descendants, so it is considered to bring good fortune.

[The first half of 'The Scarlet Princess of Edo']

This is one of the masterpieces by playwright Tsuruya Nanboku IV. Priest Seigen of Hasedera Temple falls in love with the page Shiragikumaru and agrees to commit double suicide with him, but Seigen alone survives the attempt. Seventeen years later, Seigen has become a high priest and accepts, Sakurahime’s wish to become a nun. Tsurigane Gonsuke appears before her as she waits to take the tonsure. He once stole into her mansion and violated her. After this unexpected reunion, she loses her will to become a nun and gives herself to him. Sakurahime is arrested for her immoral deed, and Seigen notices that Sakurahime is the reincarnation of Shiragikumaru. Gonsuke’s sin of having relations with a woman is blamed on Seigen and he is kicked out of the temple.