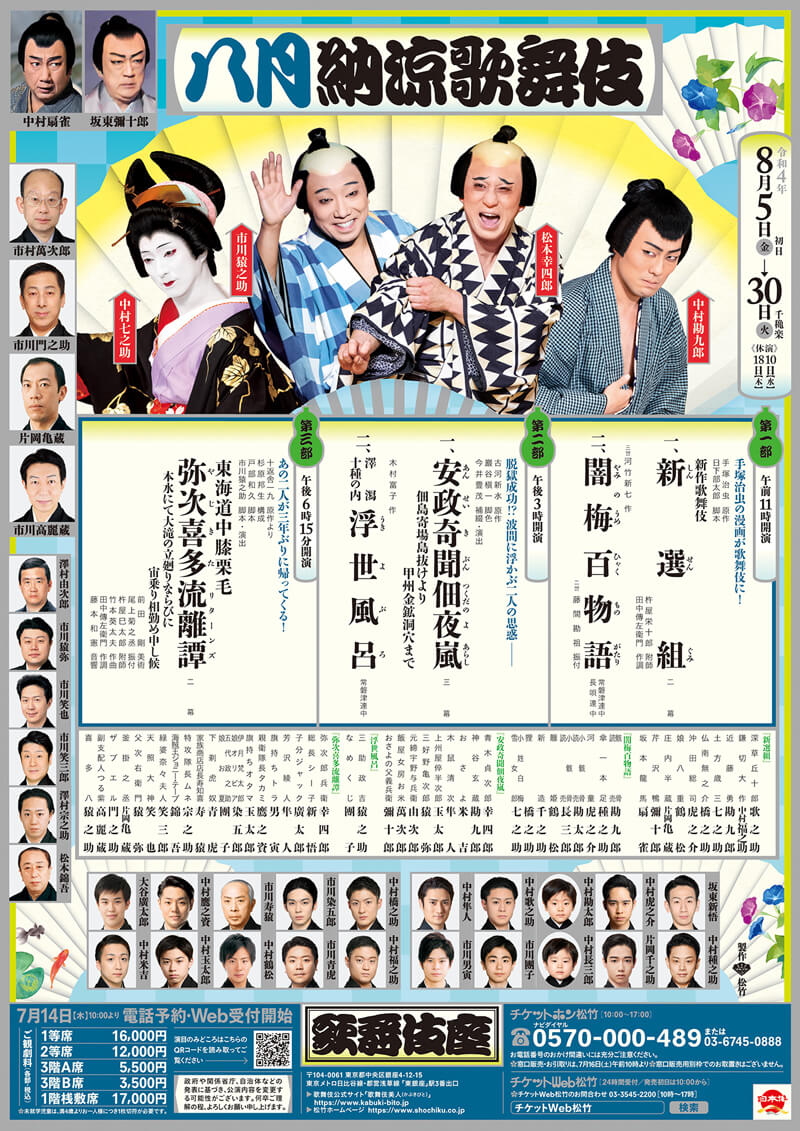 August Program at the Kabukiza Theatre

*No performances on the 10th (Wed) and 18th (Thu).
*The theatre will open 40 minutes before the performance starts.

*Single Act Seats are not for sale.
*Tea will not be offered at the Box Seats. Please refrain from eating at seats as well.

In Part 1, a brand new kabuki play adapted for the first time from a manga series by Tezuka Osamu, plus a humorous dance based on the game of 'One Hundred Ghost Tales' will be performed. In Part 2, you will see a domestic play based on a real jailbreak that took place in the Edo period, and a refined dance with nimble movements. In Part 3, enjoy the feature of the summer at the Kabukiza Theatre, modelled on the original work of the same title by Jippensha Ikku but adapted and refined by Matsumoto Kōshirō and Ichikawa Ennosuke.

This is the first kabuki adaptation of the manga series by Tezuka Osamu.
It is set at the end of the Edo period in Kyoto. Fukakusa Kyūjūrō becomes a member of the Shinsengumi, a party of masterless warriors, to avenge his father's death, and gets acquainted with a boy swordsman named Kamagiri Daisaku. Though they have opposite characters, in time they become good friends after sharing moments of relief during their severe training. One day, Kyūjūrō is forced to slay a man while fighting as a member of the Shinsengumi and now his own life is sought to avenge that man's death...

['The Game of One Hundred Ghost Tales']

This is a dance drama based on a traditional popular game in which people would light one hundred lanterns and tell ghost stories. At the conclusion of each story a light was extinguished. When the last remaining lantern was put out, it was believed, a real ghost would appear.

['Strange News in the Ansei Era: Night Storm at Tsukuda']

Aoki Teijirō and Kamiya Genzō spend their days doing hard labor in prison on Tsukuda Island in the early winter of 1858. Aoki, who was formerly a samurai in Kōshū province, hopes to avenge his parents who were killed over the buried gold of Takeda Shingen. As Kamiya knows of Aoki's wish, he encourages Aoki to flee from the island together with him. On the night when they carry out their plan, they climb over the fence of the prison and go across the Sumida River to the riverbank at Fukagawa. They commit one crime after another to earn their traveling expenses. Parting from Kamiya, Aoki sets out for Kōshū province and encounters the ferryman Gihē and his family at a ferry on the Fuefuki River and...

This is a light-hearted dance portraying the attendant Masakichi at a public bath house in the Edo Period. Masakichi goes about his chores stacking up wooden pails neatly and checking the temperature of the bath. At dawn when the cocks crow he rinses the bathers' backs. However, one day a slug in the figure of a woman appears...

Yajirobē and Kitahachi worked as stagehands at the Kabukiza Theatre in Edo's Kobikichō district. They set out on a pilgrimage to Ise Shrine dreaming of getting rich quick, and caused various kinds of trouble everywhere they went. But they managed to come through every crisis. Three years have passed since then. At the end of the previous play in this series, fireworks at the Ise Shrine blew them high up in the sky, after which they landed on a remote desert island, but they survived somehow. By this means and that, they manage to arrive in Nagasaki where they learn that the Kabukiza Theatre, where they formerly worked, is in trouble. In order to return to the Kabukiza Theatre, they again have an incident-filled journey, getting over many problems which confront them.