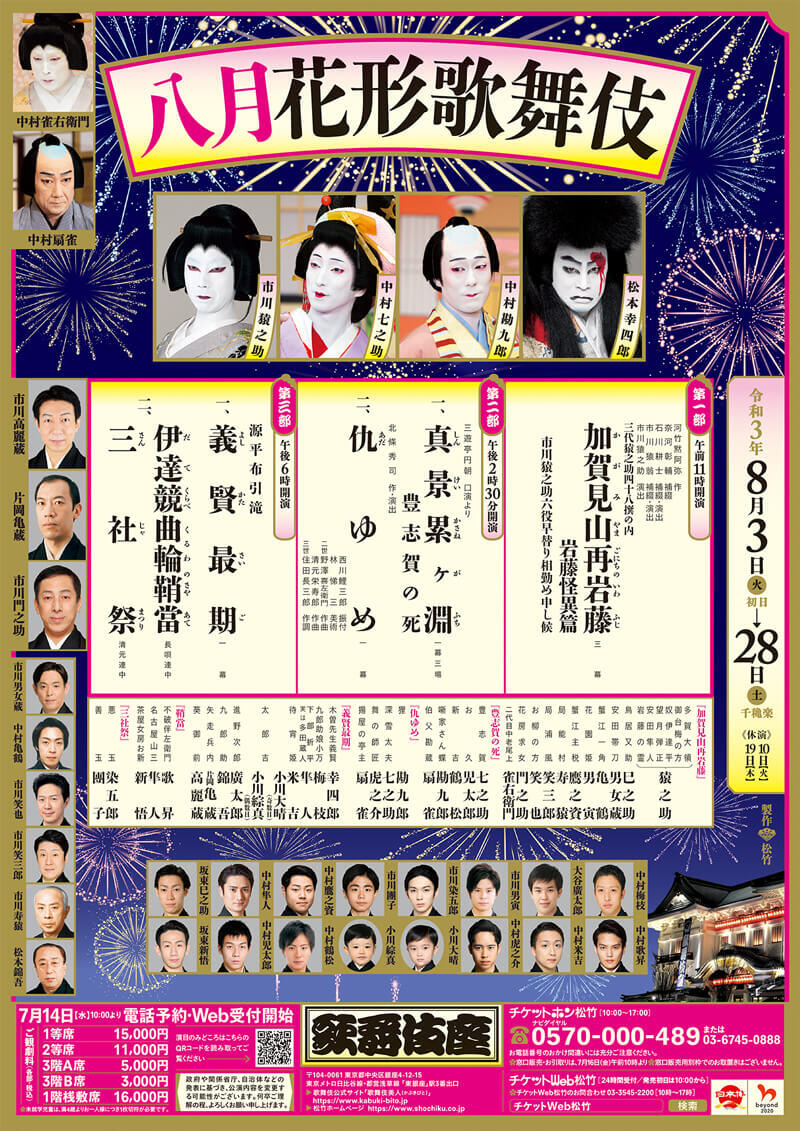 ●Notification of the theatre operations for the August performances(Aug 2)

The August program at the Kabukiza Theatre features younger kabuki actors. Part 1 is a spine-chilling ghost story full of electrifying surprises you can only see in kabuki. Part 2 also starts with a ghost story, this time based on a 'rakugo' story, and this is followed by a heartwarming and sentimental dance drama featuring a raccoon dog who has fallen in love. In Part 3 you'll see a famous kabuki play with gidayū narration that was adapted from the puppet theatre, followed by a brilliant play that takes place in the Yoshiwara Pleasure Quarters. Finally, the program ends with a dance in which two fishermen perform dynamically before the sea.

This play is a sequel to an earlier classic in which the evil lady-in-waiting Iwafuji caused the death of her rival Onoe by excessively persecuting her, including beating Onoe with a sandal. One year later, Onoe's servant Onoe II, who avenged her death by killing Iwafuji, has come to pray for the repose of Iwafuji's spirit. Iwafuji's bones come together magically and her spirit floats among the cherry blossoms. Later the spirit appears at the mansion to beat Onoe II with a sandal. Evil forces are plotting to take over the Taga household where Onoe works.
The servant Torii Matasuke is harboring the faithful retainer Motome. He decides to kill his lord's consort, an evil woman who is one of the main forces in the plot, but through the scheming of another, he ends up killing his lord's wife instead. The death is blamed on Motome, and Matasuke must take his own life to clear Motome's name. In the end, the lord defeats all the evil forces threatening his realm and the ghost of Iwafuji returns to the afterworld.

['The Death of Toyoshiga' from 'The Ghost of Kasane Swamp']

The story of the vengeful spirit of Kasane, a woman who was horribly disfigured, is one of the most famous in Japanese folklore. In the Meiji period, Rakugo storyteller San'yūtei Enchō reworked this into a modern psychological tale. The most famous episode portrays Toyoshiga, a middle-aged music teacher who is passionately in love with her young student Shinkichi. Shinkichi is in love with an attractive young neighbor, Ohisa, and wants to get away from the sick and demanding Toyoshiga, but even death will not thwart her desperate passion.

A raccoon dog falls in love with the courtesan Miyuki in Kyoto's Shimabara Pleasure Quarters but his feelings are unrequited. Hoping to win her heart by some means or other, the racoon dog transforms into her dancing master whom she adores and visits her. In this disguise, it discloses its feelings for her and she is overjoyed, for she has been suffering from her unrequited love for her dancing master. However, one day, the real master appears in front of them and ....
The depiction of the raccoon dog's painful love for the courtesan by way of a humorous dance is one of the highlights. In the latter half, its pure and wholehearted devotion is portrayed with great pathos. There is both laughter and sorrow as the story unfolds peacefully like a fairy tale.

This is one act from a history play which shows the early rise of the Genji clan after a time of oppression.
Yoshikata is the lone member of the Genji clan and pretends to have no interest in reviving its fortunes. However, Yoshikata is about to have a son who will eventually become the general, Yoshinaka, who will lead the Genji to victory once more. But, Yoshikata himself is attacked and surrounded, and he dies in a spectacular scene where he falls from the top of a flight of stairs.

['A Flamboyant Fight in the Pleasure Quarters']

This famous act is set in the main avenue of the Yoshiwara Pleasure Quarters where cherry blossoms are in full bloom. Two men appear: Fuwa Banzaemon in a 'haori' coat patterned with a design of lightning bolts, and Nagoya Sanza, dressed in a short-sleeved kimono and a 'haori' coat with a pattern of swallows in the rain. After their scabbards brush against each other as they pass, they begin arguing and draw their swords, but the proprietress of a teahouse mediates between them. Enjoy an act filled with stylish beauty unique to kabuki.

Two fishermen are casting nets in the Sumida River. This illustrates the legend of the origins of the Asakusa Shrine, where two brothers fished a statue of the Buddhist deity Kannon out of the water. As the two perform a light-hearted dance, a cloud suddenly appears and they lose consciousness. When they wake up again, they are each possessed by the spirit of 'good' and the spirit of 'evil'. They start to dance again...