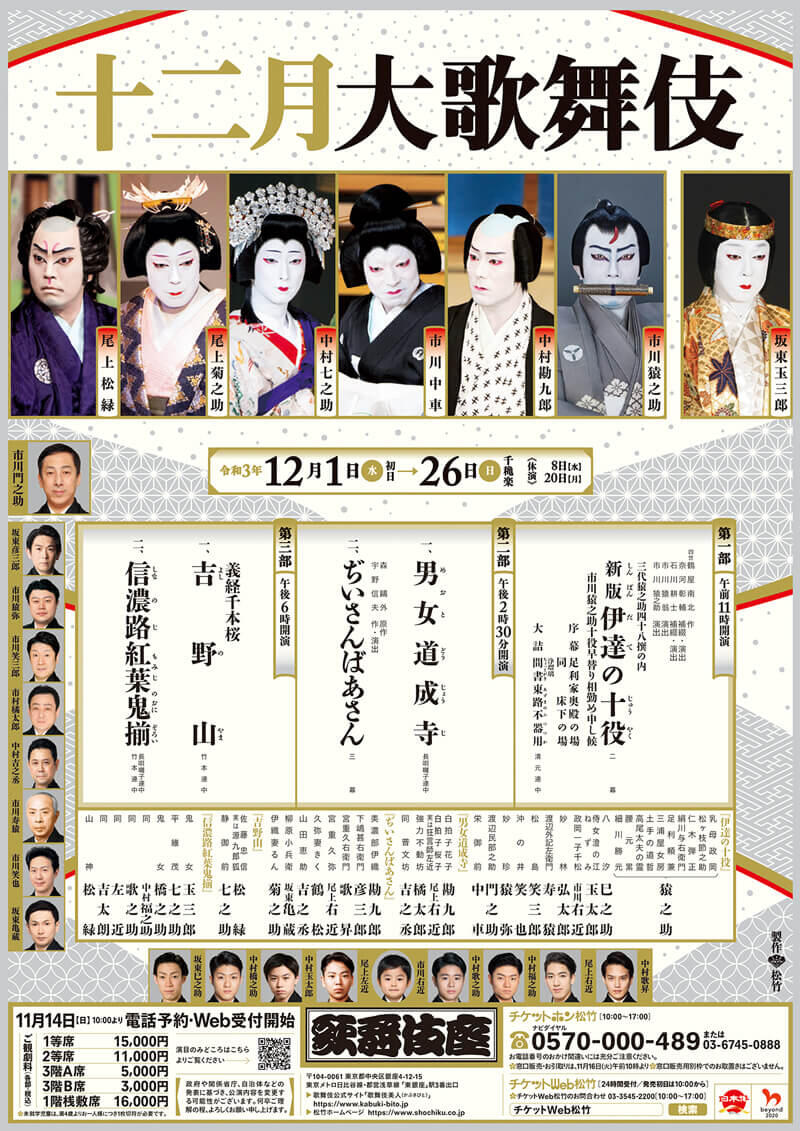 Part 1 begins with an entertaining history play in which an actor performs ten roles in quick succession. In Part 2, you can see a touching masterpiece of the Shin Kabuki (‘New Kabuki’) genre, together with a flowery dance by two actors, while in Part 3, you can enjoy a dance set against the spectacular backdrop of cherry blossoms in full-bloom, plus a powerful dance play in which a beautiful lady reveals her true nature as a demon. Please enjoy the last performances of this year at the Kabukiza Theatre.

['The Ten Roles of Sendaihagi']

This play was originally written by Tsuruya Nanboku IV and revived by Ichikawa Ennosuke III (now En'ō) in 1979. The play's main attraction is the fact that the leading actor enacts ten different roles, male and female, villain and hero, one after the other in quick succession.
Nikki Danjō is initiated into the art of rat sorcery by the ghost of his father Akamatsu Man'yū and plots one conspiracy after another to realize his ambition to take over the Ashikaga Clan. He plots to poison Tsuruchiyo, the heir to the present lord Ashikaga Yorikane. Sakae Gozen, a member of the evil faction, visits Tsuruchiyo. As she offers him sweets, Senmatsu, son of Tsuruchiyo's wet-nurse Masaoka, suddenly runs in and eats them. He immediately shows signs of being poisoned, and as punishment (as well as to cover up the truth), Danjō's wicked sister Yashio tortures him to death. As Sakae Gozen observes Masaoka, who seems to remain unperturbed even while her son is being killed, she mistakenly assumes that Masaoka is a member of their faction and gives her the scroll on which the names of the conspirators are written. Just then, a giant rat appears and deprives her of the scroll. It is Nikki Danjō in disguise, using the sorcery that his father taught him.
Meanwhile, to repay favors he received from his former lord, Kinugawa Yoemon, who was previously a retainer of the Ashikaga Clan, chases after Danjō to put a stop to his evil deeds and ....

The original 'Musume Dōjōji' is based on the legend of a woman who transformed into a serpent out of jealousy, and destroyed the temple bell that hid the man she loved. In that version, the woman changes her costume repeatedly while depicting various kinds of love through dance. In this version, however, there are two dancers, one of which is eventually revealed to be a man in disguise. The two portray the romantic feelings of a loving couple. The dance reaches its climax when the two reveal their true characters.

Based on a short story by Mori Ōgai, this modern play by Uno Nobuo shows the deep love of the couple, Iori and Run. The young samurai Iori travels to Kyoto with his lord, leaving Run, his beloved wife, behind. There, he attacks another man in a fight over a sword and is put under house arrest, which separates him from his wife.
37 years later, he returns to his home as an old man. There he meets an elderly woman. This turns out to be Run who has also aged. They do not recognize each other until the woman sees Iori's peculiar habit of putting his hand to his nose, the one thing that has not changed.

['Mt. Yoshino' from 'Yoshitsune and the Thousand Cherry Trees']

This is a beautiful dance filled with mystery and excitement set amidst the dazzling cherry blossoms of Mt. Yoshino. Shizuka and Tadanobu are on their way to find Shizuka's lover, the military commander Yoshitsune. He has become a fugitive and has had to leave Shizuka behind in the care of his retainer Tadanobu.
However, this Tadanobu is actually a magic fox in disguise. He has transformed into human form in order to be with a drum that Shizuka carries, the skins of which are made from the hides of the fox's parents.

['The Autumn Leaves and the Demon of Mt. Togakushi']