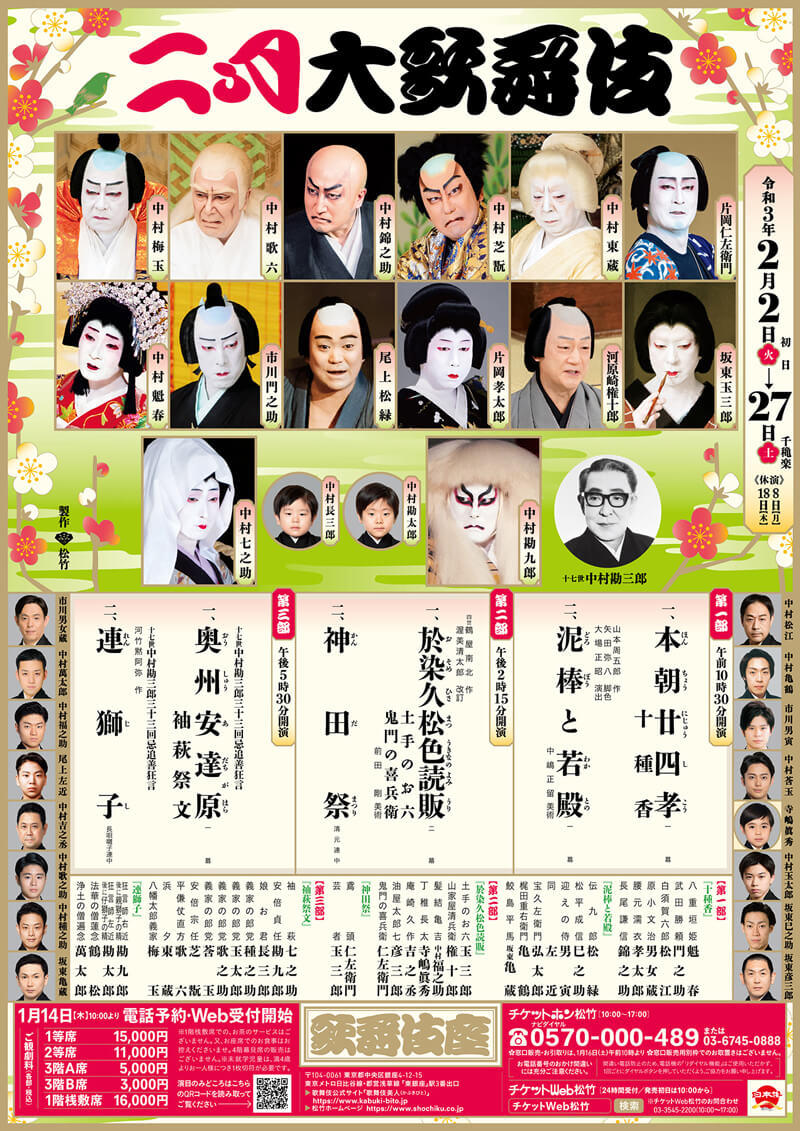 *No performances on the 8th (Mon) and the 18th (Thu).
*The theatre will open 40 minutes before the performance starts.

The February Program consists of works of various genres. In Part 1 you can enjoy a masterpiece of the ‘history play’ genre which depicts the wholehearted love of a princess, together with a comedy adapted from a short story by Yamamoto Shūgorō. In Part 2 we present a domestic play by Tsuruya Nanboku that stars Nizaemon and Tamasaburō, and a festive dance. In Part 3 you can enjoy two plays commemorating the 33rd anniversary of the death of Nakamura Kanzaburō XVII.

Nagao Kenshin, one of Japan's most powerful feudal warlords, has borrowed a family treasure from his rival, Takeda Shingen. However, he has failed to return this treasure, which has caused a rift between the families. Kenshin's daughter, Princess Yaegaki, is mourning the death of her fiancé Katsuyori, Shingen's son, who supposedly killed himself after taking responsibility for the Shogun's assassination. However, she notices a close resemblance between her fiancé's portrait and the new gardener. The gardener is in fact Katsuyori, who has entered the household in disguise to regain possession of the stolen family treasure. Unfortunately, Kenshin has also seen through the disguise and plans to kill Katsuyori, and Princess Yaegaki decides she must take the treasure to save him.
The role of Princess Yaegaki is one of the three "red princess" roles which epitomize the art of the 'onnagata' female role specialist. Such characters must combine delicate refinement with passion and an unshakable strength of will for the sake of the man she loves.

['The Thief and the Young Lord']

This is a comedy adapted from a short story by Yamamoto Shūgorō which depicts the heartwarming bond between an ill-fated young lord and a good-natured thief. Narinobu, the second son of the lord of Daishōji, Matsudaira Ōinokami, is confined in a dilapidated house due to a conspiracy hatched by the evil chief retainer. The thief Denkurō breaks into the house but finds nothing to steal. Feeling pity for Narinobu who has not enough to eat, he takes care of him. After that, the extraordinary coexistence of Denkurō and Narinobu begins...
This is a heart-warming piece depicting the bond between the charming and sympathetic thief, and the pessimistic and ill-fated young lord.

['The Scandalous Love of Osome and Hisamatsu']

This is a play written by Tsuruya Nanboku IV in the early 19th century, and this scene in particular reflects the decadence and corruption found in the underbelly of society at that time. The scenes portray two outwardly charming characters who are filled with wickedness. There are several typical 'role types' that appear in kabuki, and the 'akuba' (wicked lady) is one of them. Oroku is an 'akuba' and although beautiful, she appears to be truly wicked.
Trying to extort 100 gold coins, Oroku and her husband Kihē visit a pawnshop carrying a dead body. Claiming the corpse to be Oroku's brother, the pair insists that he died from an injury he incurred in a quarrel with the shop's apprentice. However, the dead body suddenly regains consciousness and the extortion ends in failure. Although disappointed, the two leave the pawnshop without flinching in the slightest.

The gallant commoners of Edo's neighborhoods loved nothing better than a festival, and this performance is a dance based on one of the biggest festivals in Edo (the old name for Tokyo). In this dance, a gallant fireman and a geisha appear on stage and display their 'Edo-style' spirit. In the end, a young man comes out and a beautiful fighting scene unfolds on stage.

['Sodehagi's Ballad to the Gods' from 'The Adachi Plain in Ōshū']

The emperor's brother Tamakinomiya has been abducted and his guardian Taira no Kenjō Naokata is to bear the blame. Naokata's daughter, Sodehagi, was formerly disowned for having had an illicit affair with a masterless samurai. Now, hearing of her parents' difficulties, Sodehagi returns to their house. Outside the door she apologizes to her parents by way of reciting a ballad. Then, a court noble arrives and blames Naokata. Finally, Naokata takes responsibility and kills himself, after which Sodehagi also kills herself.
Minamoto no Yoshiie, who is the general of the punitive force against the rebel, appears and finds out that the court noble is, in reality, Abe no Sadatō, who is both the rebel and Sodehagi's husband. He parts from Sadatō promising to meet again on the battlefield.

A dance adapted from a tale featuring the legendary ‘shishi’, a mythical lion-like beast. It is based on the idea that a ‘shishi’ will push its cubs over a steep cliff as a test of their strength, only nurturing those cubs strong enough to climb up by themselves. Two entertainers dance the tale of the legendary ‘shishi’ that live at the foot of a holy Buddhist mountain.
The dance portrays a parent ‘shishi’ forcing its cub to undergo harsh training in order to grow up strong. In the finale, the ‘shishi’ themselves appear and perform their dance with the wild shaking of their long manes.