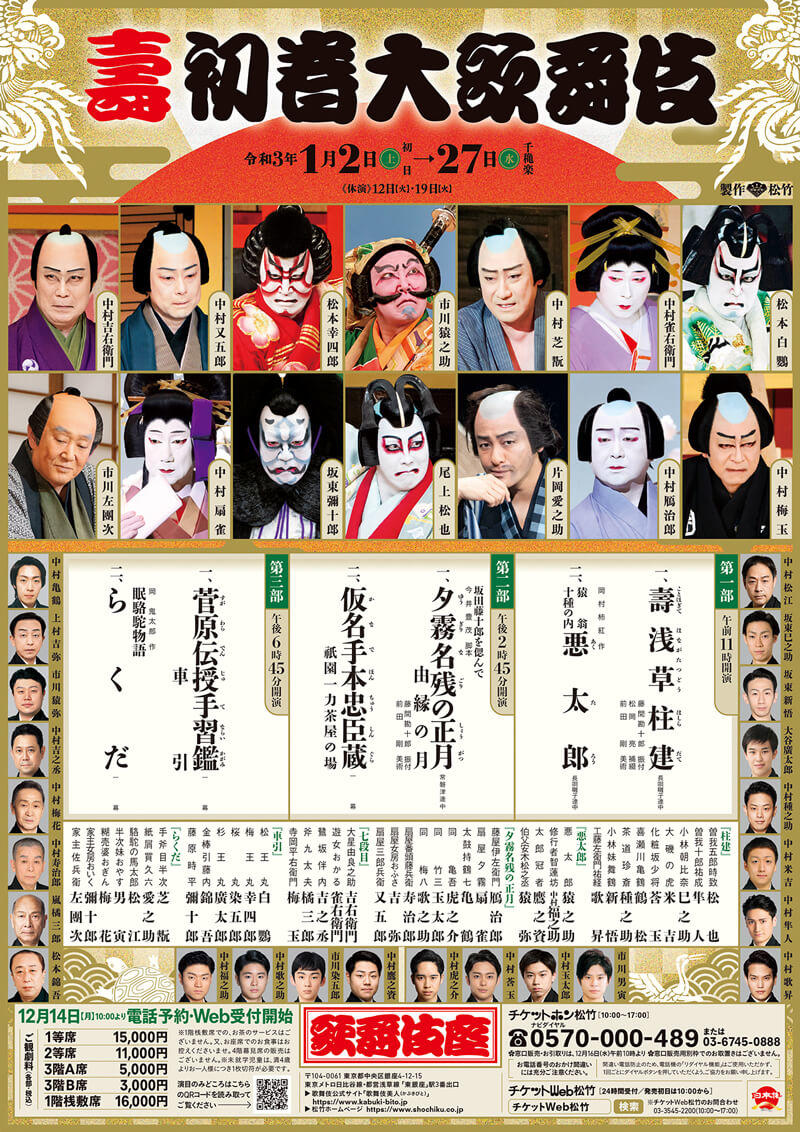 *No performances on the 12th (Tue) and the 19th (Tue).
*The theatre will open 40 minutes before the performance starts.

Since the reopening of the theatre in August, we have been presenting a 4-part show each month without intermissions, but starting from January, 2021, we will present shows divided into 3 parts, each consisting of 2 plays or dances with an intermission between each.
You can see colorful dances perfect for the New Year as well as two of the three great classics which continue to be very popular. ‘Yūgiri and Memories of Love' is performed in Part 2 to commemorate the late Sakata Tōjūrō. Please enjoy this dance drama performed by his sons Ganjirō and Senjaku that is filled with the atmosphere of the Kansai region.

Kudō Suketsune was appointed Marshal of the Hunt at the foot of Mt. Fuji by his master Minamoto no Yoritomo. For this occasion, he intends to build a temporary hunting lodge and holds a ceremony dedicated to the foundation of its first pillar. The Soga brothers Jūrō and Gorō who seek Suketsune's life as their father's slayer also attend this ceremony. While Maizuru, Chinsai and Kisegawa appease the furious Gorō, Suketsune tells how their father Kawazu Saburō was killed.

This dance is based on a comic kyōgen play and was written for Ichikawa En'ō I, for whom it became a specialty. This dance shows a wild drunkard named Akutarō. He appears with a bushy beard and a long halberd that he waves around wildly. But his uncle has a plan to cure him of drinking.

['Pulling the Carriage Apart’ from ‘Sugawara’s Secrets of Calligraphy']

Umeōmaru and his triplet brother, Sakuramaru, try to get revenge on Fujiwara no Shihei who falsely accused Umeōmaru's lord, Kan Shōjō of treason. However, they are confronted by their other brother, Matsuōmaru, who is one of Shihei's retainers. The energetic performance of Umeōmaru is a showcase for the bombastic 'aragoto' style of acting.

['Rakuda: Party with a Corpse']

This is a popular dramatization of a rakugo comic story. A petty gang member called Rakuda has died after eating blowfish. Hanji, one of his evil companions, finds him and hopes to hold a wake, but has no money. Every neighbor is overjoyed to hear that such a nuisance is dead, but when Hanji tries to get them to contribute, they refuse to contribute a single penny to his burial. Hanji threatens Kyūroku, the waste paper collector, and demands that he go to the landlord's house carrying Rakuda's corpse to obtain condolence money. The plan works and they succeed in having the saké delivered. They start drinking together, but as they drink, the hapless Kyūroku becomes surprisingly aggressive.