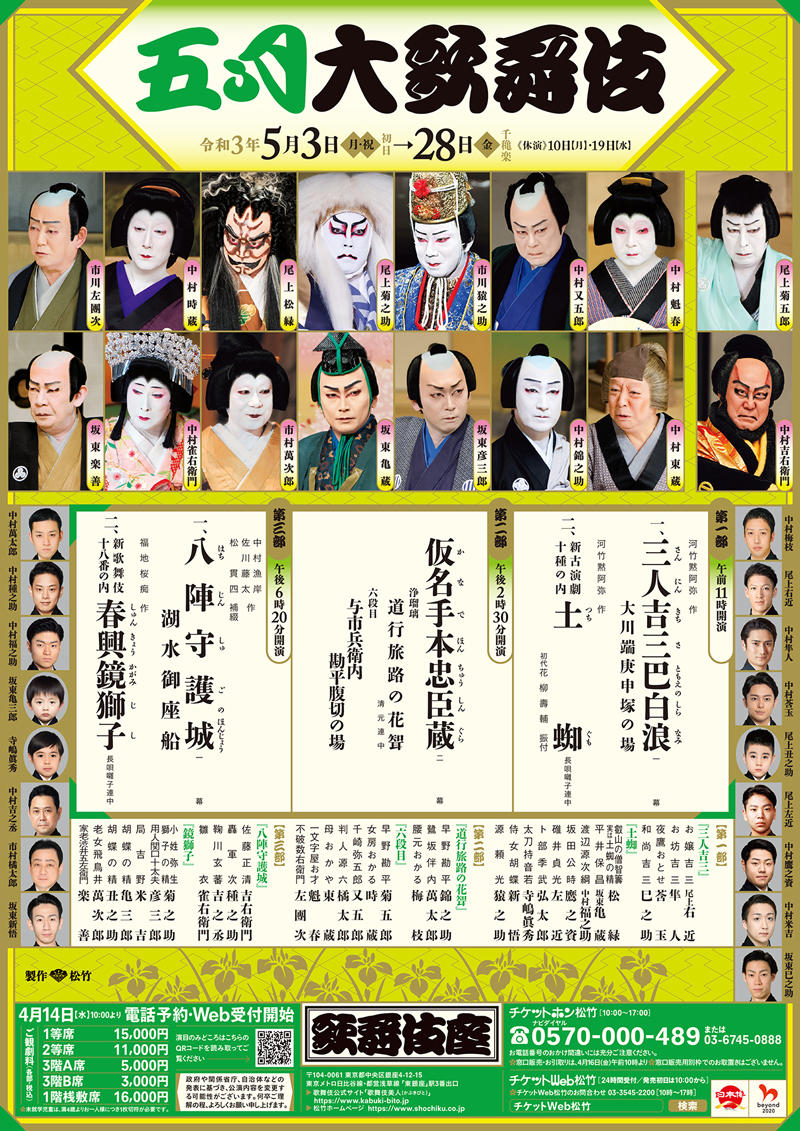 *No performances on the 10th (Mon) and the 19th (Wed).
*The theatre will open 40 minutes before the performance starts.

The May Kabuki Program consists of impressive works of various genres.
In Part 1 you can see a play about bandits by Kawatake Mokuami filled with the atmosphere of old Edo (the former name for Tokyo), and a dance drama with a spectacular finale based on the legend of the Great Earth Spider.
In Part 2 you can see two scenes from one of the three great classics of kabuki: first, a dance depicting the sweet sentiments of a loving couple traveling hurriedly to their destination, and secondly, the scene called ‘Kanpei’s Ritual Suicide by Disembowelment', a scene of great pathos that contains some very famous dialogue.
In Part 3 you can see a grand history play based on an episode from the life of the brave warrior Katō Kiyomasa, as well as a beautiful and vigorous dance featuring a young palace maid and the spirit of the ‘shishi’ lion.

This dance drama was adapted from a play in the classical Nō repertoire. In legend, the samurai lord Minamoto no Raikō is famous for destroying demons. In this work, Raikō is ill in bed. Distinguished priests visit him to pray for his recovery but they do no good. Then, another priest appears mysteriously at night also claiming to pray for his health. However, suspicious of the strange shadow the priest casts, Raikō cuts at him with his heirloom sword named 'Hizamaru'. The priest turns out to be the spirit of the Great Earth Spider which has the ambition to rule the country. In the end, the spider's plan to kill Raikō is thwarted and it is defeated by his retainers in an exciting fight.

['The Lovers' Journey' from 'The Treasury of Loyal Retainers']

There are few plays more popular in kabuki than 'KANADEHON CHŪSHINGURA' ('The Treasury of Loyal Retainers'). This is based on a true incident in which a feudal lord attacked another in the shōgun's palace and was immediately sentenced to commit ritual suicide and his domain was confiscated. In this dance, after the death of his lord, the retainer Kanpei and his lover, the lady-in-waiting Okaru flee to Okaru's home, a farmer's house in the country. Kanpei feels responsible for the calamity which befell his lord because at the crucial time he was having a romantic tryst and was not at his master's side. He tries to commit suicide but Okaru stops him and convinces him that they should go to her home as husband and wife and wait for the right moment for him to apologize.

['Act 6, Kanpei's Suicide' from 'The Treasury of Loyal Retainers']

The retainer Kanpei lives a poor life with Okaru at her parents' rural home. He desperately wants to take part in the vendetta against his lord's enemy, but must come up with the money necessary to finance his part in it. Secretly, Okaru and her family decide that the only way to raise the money is to sell her to the pleasure quarters. On a lonely highway, while Okaru's father is on his way home from sealing the deal a thief named Sadakurō kills him and steals the money. In a bizarre twist of events, however, Kanpei then kills the robber accidentally while out hunting and he finds the money. Later, the fabric of the wallet seems to prove that Kanpei has murdered his father-in-law. Kanpei takes responsibility for both the death of his father-in-law and also for being absent when his lord needed him, and commits ritual suicide.

This is a 'jidaimono' history play that dramatizes a true historical event. Katō Kiyomasa, in this play called Satō Masakiyo, was one of the fiercest generals under Toyotomi Hideyoshi and he continued to defend Hideyoshi's family and young heir Hideyori, even after the crafty Tokugawa Ieyasu had come to power. Ieyasu searched for any excuse he could find to destroy the clan of his most powerful rival. In this play, the aged warrior Masakiyo defends the young heir of his late lord when he is summoned to a meeting with an old feudal lord. He does not budge from his post even when he is weakened by poison.

['Young Palace Maid and the Spirit of the Lion']

The palace maid Yayoi performs an auspicious lion dance for the shōgun in his opulent palace, but as she does so she gradually finds herself coming under the control of the lion spirit. In the second half of the dance, the lion spirit itself appears and performs its frenzied dance among peonies and fluttering butterflies.