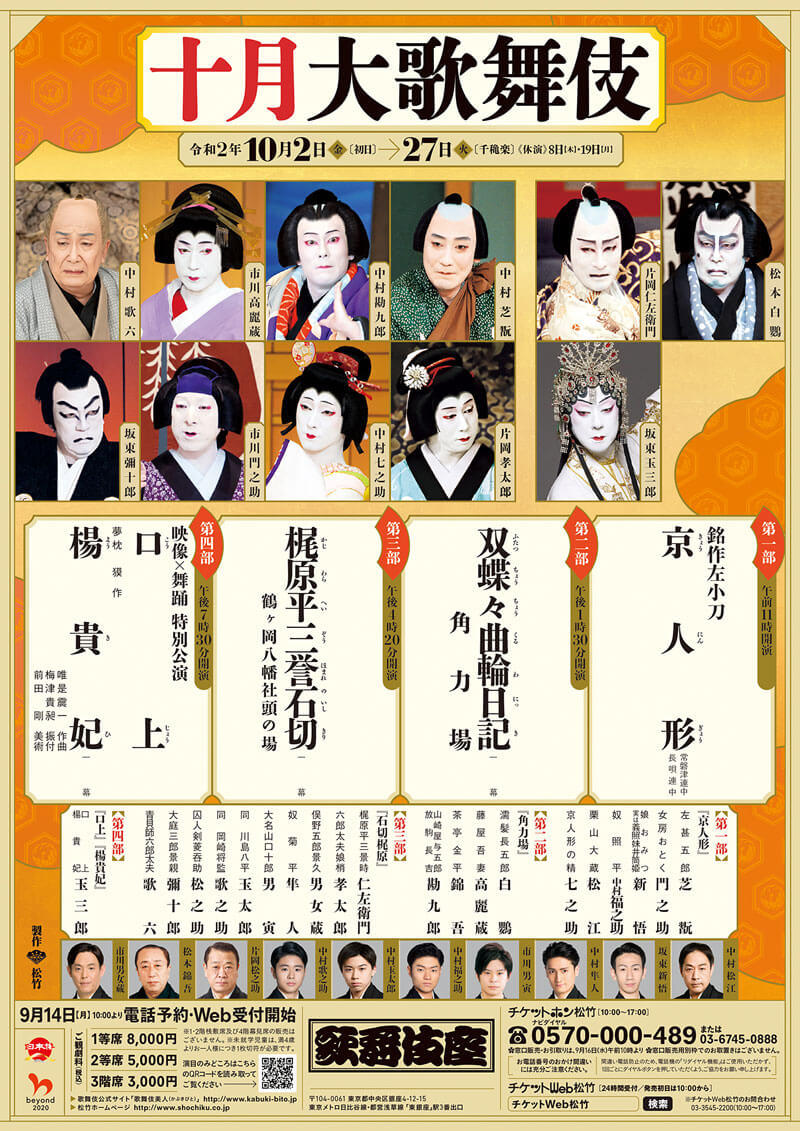 *No performances on the 8th (Thu) and the 19th (Mon).
*The theatre will open 40 minutes before the performance starts.

In October the Kabukiza Theatre will continue to ensure your health and safety by taking precautionary measures.
The program will again be divided into four parts to shorten the length of your stay and to make sure the theatre can be sanitized and ventilated after each play.
The program consists of a variety of works, including a history play, a domestic play and dances, as well as a new attempt at merging projected imagery and dance. In each of the four parts there will be plenty to satisfy you, so we invite you to enjoy yourself on a special autumn day at the Kabukiza.

You can see the stage pictures of the program from HERE!

This dance tells the story of Hidari Jingorō, a wood sculptor famous for carving the sleeping cat on the great gate of Nikkō Shrine. Falling in love with a beautiful courtesan, he carves a doll that looks exactly like her. The doll suddenly starts moving, as though it is alive, and Jingorō enjoys his time with the sculpture. At the end of the dance, there is a spectacular fight scene in which Jingorō is set upon by carpenters brandishing their tools.

['The Sumō Match' from 'Two Butterflies in the Pleasure Quarters']

This is a sewamono play portraying in a realistic way the lives of ordinary people in the Edo period (1603-1868). The words in the title 'Futatsu Chōchō' mean 'two butterflies', and this reflects the fact that the names of the two sumō wrestlers who play important roles in the play both begin with "chō": Chōkichi and Chōgorō. Nuregami Chōgorō throws a match in the hopes that the younger wrestler Hanaregoma Chōkichi will persuade his patron Gōzaemon to give up the beautiful courtesan, Azuma. This is because Yogorō, Chōgorō's patron, and Azuma love each other, and Yogorō wants to redeem her from her contract. However, Chōkichi loses his temper at the fact that Chōgorō purposely lost the fight and the two begin quarreling, performing a series of magnificent mie poses as they compete in a test of pride.

['The Stone-cutting Feat of Kajiwara']

This play is one act from a jidaimono history play set in the 12th century. The Taira generals are visiting the Tsurugaoka Hachiman-gū Shrine in Kamakura. Rokurodayū and his daughter Kozue go there to sell a sword. The Taira general Kajiwara is asked to test the sharpness of the sword by slicing two live human beings in half. The sword is a priceless heirloom belonging to the enemy Genji clan, and he deliberately fails the test in order to keep it from falling into the hands of his Taira clan. Though he himself is now a member of the Taira, Kajiwara reveals that his true feelings are with the Genji. Finally, he demonstrates the true power of the sword by cutting a large stone basin in two.

Bandō Tamasaburō will greet the audience and explain his intentions in planning this special performance that merges the projected image and dance.

(YŌKIHI) Based on a classical Nō play, this is a new dance showing YŌKIHI (Yang Guifei) the consort of the Tang Emperor whose beauty nearly toppled the empire. The play is set after her death and shows a magician sent by the grieving Tang Emperor to find her spirit in the land of immortals. The main theme of the dance is eternal love, here expressed beautifully on stage.