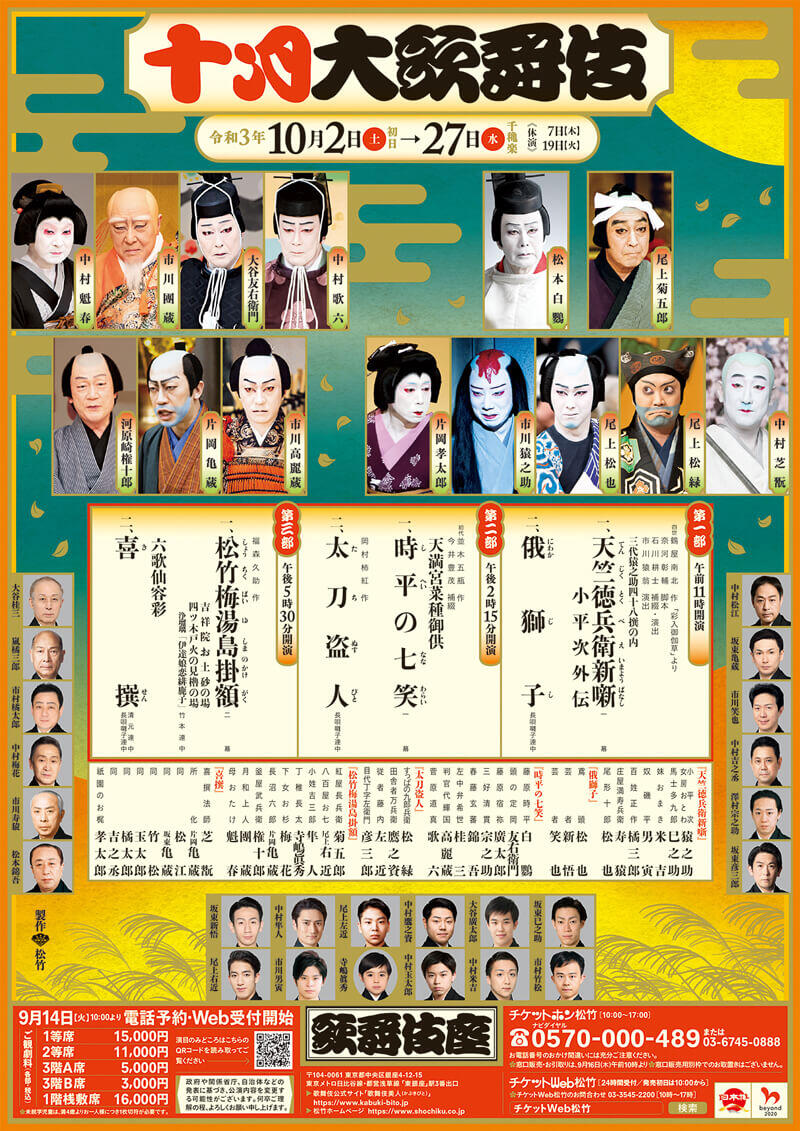 *No performances on the 7th (Thu) and the 19th (Tue).
*The theatre will open 40 minutes before the performance starts.

In Part 1, you can enjoy the ghost story of Kohata Koheiji, a character from the works of Tsuruya Nanboku, together with a chic and lively dance featuring geishas and the head of a firefighting brigade. In Part 2, there is a history play, the highlight of which is the 'seven laughs' of Fujiwara no Shihei, a court minister who plotted conspiracy, followed by a light and amusing dance drama featuring a country man and a thief. In Part 3, a comic story unfolds about a magical 'odosha' sand, and in the final scene, you can see a girl expressing her love through the technique of 'puppet movement'. A light-hearted dance will follow, in which a famous classical poet is seen as a priest with love on his mind!

Koheiji has been banished from his domain and lives with his wife Otowa in his birth place Kobata. However, when Koheiji goes on a pilgrimage throughout the country, Otowa commits adultery with the packhorse driver Takurō and they live now as if they were husband and wife. One day, after hearing that Koheiji, who stands in his way, is due to come back from the pilgrimage, Takurō gets poison to murder him... Please notice the onstage quick-changes of role between Koheiji and Otowa, as well as the stage tricks used for Koheiji's ghost, which make the play spectacular and enable the story to proceed speedily.

From the late Edo to the Meiji period, an event called 'Niwaka' took place in the eighth month of the year in the pleasure quarters where geishas and jesters performed improvised dances. This is a lively dance which might have been shown at such an occasion evoking the atmosphere of an Edo period festival. The highlight of the piece is the lion dance performed by two handsome young men of the neighborhood.

The Heian period court minister Sugawara no Michizane was famously exiled to Kyūshū due to the plot of a political rival. He died angry and vengeful and was said to have transformed into a thunder god. His angry spirit was placated when he was deified, and now Michizane is worshipped as Tenjin, the god of learning. This is the subject of one of the most famous plays of bunraku and kabuki, and Michizane's political rival, Fujiwara no Shihei is always depicted as a larger-than-life villain, an evil courtier with magical powers. However, in this play, a rarely performed classic of the Kansai style of kabuki, the story seems to be totally reversed. Michizane is the victim of slander and Shihei does his best to try to mend the situation, but unfortunately, Michizane is exiled. Only after Michizane leaves does Shihei show his true self, and in a famous scene, laughs triumphantly. Shihei engineered Michizane's exile himself.

This is a comic dance drama in which the thief Kurobē tries to steal a sword from a country bumpkin called Manbē. Each man must show the origin of the sword to prove that they are the true owner. Kurobē imitates Manbē, but Manbē notices what Kurobē is doing and ...

This is a 'sewamono' play adapted from a real event from the 17th century. The greengrocer's daughter Oshichi flees from the army of Minamoto no Noriyori into Kisshōin Temple in Hongō-Komagome. Oshichi loves Kichisaburō, a page of this temple, but instead her mother betroths her to a money lender to whom they owe money. As Noriyori sends his retainer to take her as his mistress, Beniya Chōbē hides her above the building's transom and sprinkles special sand which softens everything on the pursuers. On a snowy winter night, Oshichi climbs up to the fire watchtower and beats the drum to make the gates open in order to go to Kichisaburō.

The dance 'Kisen' is one part of a series of dances portraying the six poetic geniuses of ancient Japan. The five male poets in the group are all shown as being in love with the sixth, Ono no Komachi, one of Japan's most famous beauties. While the other dances are set in ancient Japan, this dance suddenly jumps to the Edo period where the poet priest Kisen wanders about intoxicated by the beauties of the cherry blossoms and by Okaji, a beautiful tea stand waitress.