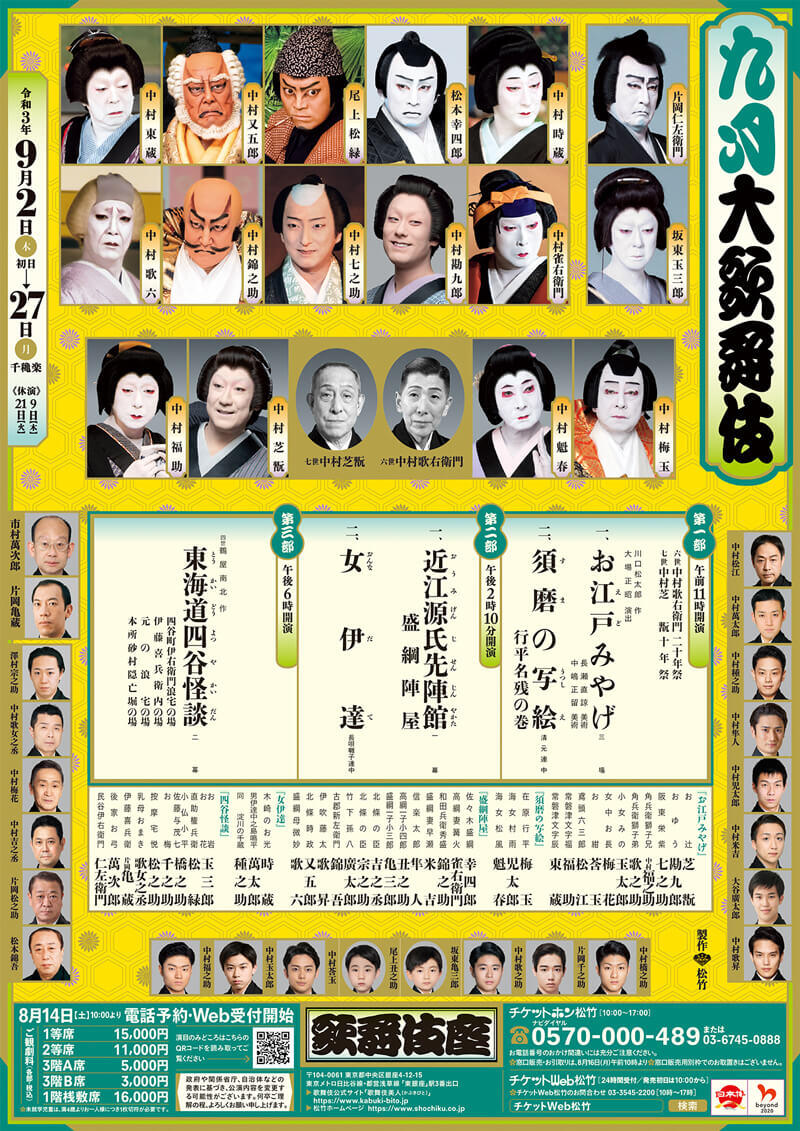 *No performances on the 9th (Thu) and the 21st (Tue).
*The theatre will open 40 minutes before the performance starts.

●Notification of the theatre operations for the September performances(Sep 11)

In Part 1 you will see a 'New Kabuki' play and a dance, commemorating the 20th anniversary of the death of the great actor Nakamura Utaemon VI and the 10th anniversary of that of Nakamura Shikan VII. The leading parts in these works were among those actor’s most successful roles. In Part 2 you will see a famous history play accompanied by Gidayū music portraying the feelings of a family separated in battle, and a dance in which you can enjoy a fight scene adopting a style unique to kabuki. In Part 3 you can see a famous Japanese ghost story by Tsuruya Nanboku, featuring two of kabuki’s most popular actors, Kataoka Nizaemon and Bandō Tamasaburō.

This 'New Kabuki' play is a light-hearted comedy portraying a fanciful episode from the life of commoners in the Edo period. Two women who travel annually to Edo to sell the cloth that they weave encounter a young couple. Moved by the spirit of romance, Otsuji spends all the money that she has made for a once-in-a-lifetime meeting with a fabulously handsome kabuki actor...

A dance drama adapted from the Nō play 'Matsukaze.'
The aristocrat Ariwara no Yukihira has been exiled to the Bay of Suma where he now lives in the company of two sisters who are divers and with whom he has fallen in love. Today, too, they come to comfort him. In fact, his crime has now been pardoned and the time is drawing near when he is to return to the capital, but he has not bid farewell to them yet ...

['Moritsuna's Battle Camp' from 'The Genji Vanguard in Ōmi Province']

This is a 'jidaimono' history play set in the Kamakura Period (1185-1333). War has broken out between Minamoto no Yoriie in Kyoto and Hōjō Tokimasa in Kamakura. The Sasaki brothers Moritsuna and Takatsuna fight on opposite sides. Takatsuna's son Koshirō is captured and held prisoner by Moritsuna. When a general from Takatsuna's side comes to ask for the boy's return, Moritsuna worries that his brother's love for his son will cause him shame. Soon, the news of Takatsuna's death is reported and Tokimasa arrives with Takatsuna's head. Moritsuna is ordered to verify that the head is really that of his brother. Before Moritsuna has completely lifted the lid of the head box, Koshirō runs out and commits ritual suicide, saying he will follow his father to the grave. However, looking at the head, Moritsuna sees that it is not Takatsuna. This is all a ruse to fool the enemy. Impressed by Koshirō's brave sacrifice, Moritsuna declares falsely in Tokimasa's presence that the head is indeed that of Takatsuna.

['The Ghosts of Yotsuya’]

This is a masterpiece by Tsuruya Nanboku vividly depicting people at the mercy of karma. Tamiya Iemon is a masterless samurai of the En’ya clan. Bearing a grudge against his father-in-law Yotsuya Samon for taking his wife Oiwa back home, he kills him. Meanwhile, Naosuke Gonbē, whose love for Oiwa’s sister Osode is unrequited, kills a man who seems to be Osode’s fiancé Satō Yomoshichi. The sisters, who do not know the real culprits, are deceived by Iemon and Naosuke who promise to avenge their dearests’ death. Oiwa is doing badly after childbirth, but Iemon is cold towards her. Taking medicine from her neighbour Itō, Oiwa thanks him, but her suffering increases. In fact, it is a poison that Itō Kihē sent her, because he plots to bring about the love marriage of his granddaughter Oume with Iemon. Iemon betrays Oiwa and consents to marry Oume. Oiwa is disfigured and finally expires, swearing to avenge herself upon them ...