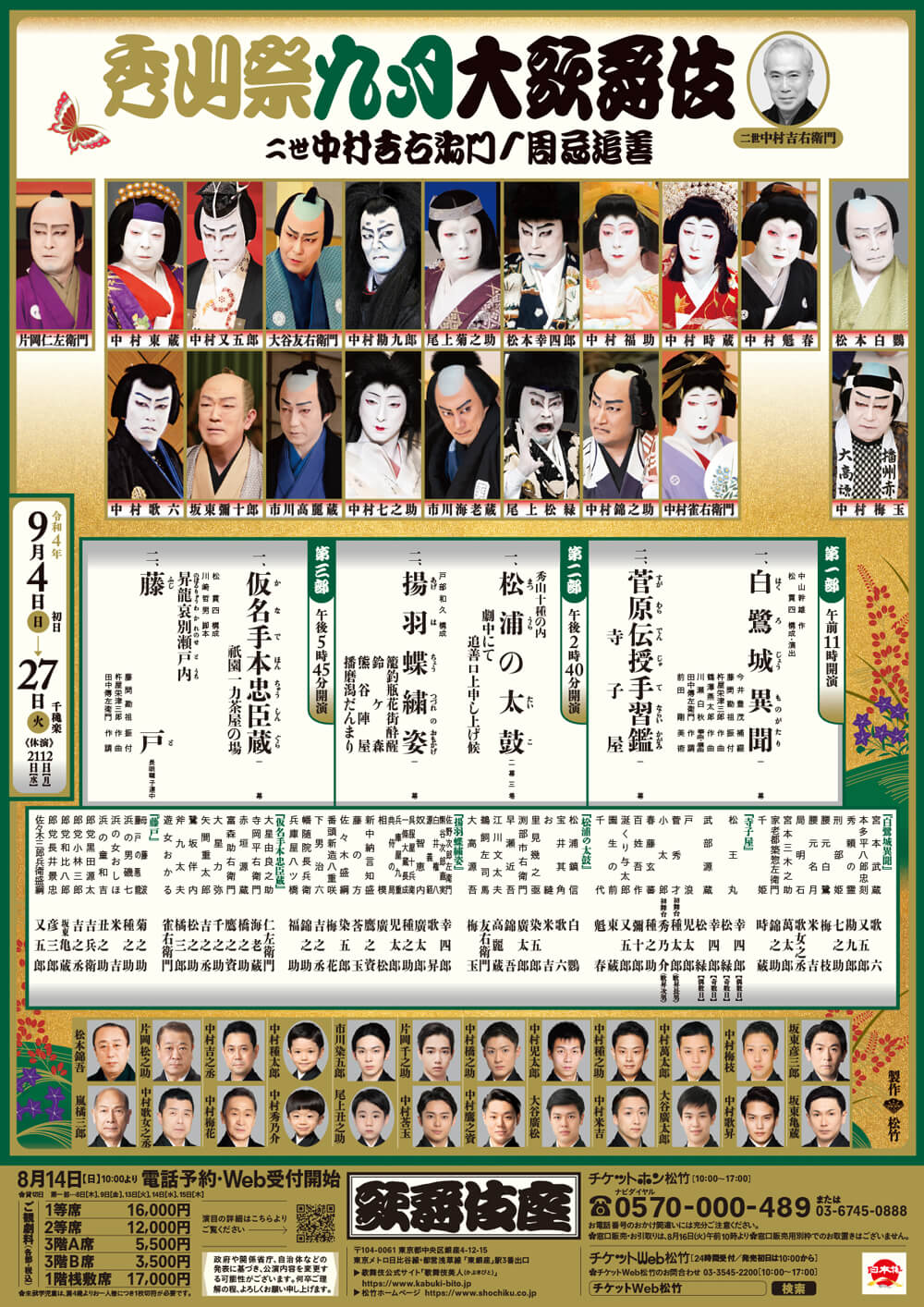 September Program at the Kabukiza Theatre

*Single Act Seats are not for sale.
*Tea will not be offered at the Box Seats. Please refrain from eating at seats as well.

This month's program is titled 'Shūzan-sai' (the Shūzan Festival). Shūzan was the pen name of Nakamura Kichiemon I, and to honor his outstanding artistry and talent as well as to commemorate the first anniversary of the death of his adopted son Nakamura Kichiemon II, it will be held for the first time in 3 years. Historical plays, domestic plays and dance plays that include those actors' most successful roles will be performed, which will be enacted by the actors associated with them.

[ 'Strange Rumour of the Himeji Castle' ]

Honda Heihachirō Tadatoki plans to hold a moon viewing party for his newly wed wife Senhime. Her ladies-in-waiting prepare for the party in the castle but they are afraid of something. A specter is said to appear every night at the top floor of the castle tower, so Miyamoto Musashi, the greatest swordsman of Japan, is invited this evening to slay the specter. He climbs up to the top floor at night after the party and ...
This play was adapted from the history and legend of Miyamoto Musashi, arranged and directed by Nakamura Kichiemon II, and was first performed in 1999 at Himeji Castle.

Takebe Genzō was Kan Shōjō's most gifted disciple. Kan Shōjō has been exiled and his family are in grave danger. Genzō runs a small school in the country and shelters Kan Shōjō's son and heir, Kan Shūsai, whom they are trying to pass off as their own son. However, word has gotten out that Kan Shūsai is at their school and Genzō has been ordered to behead him. Moreover, the retainer Matsuōmaru who knows Kan Shūsai's face is to come to inspect the head. Genzō's only hope is to kill one of the other students as a substitute. On that day, a new student named Kotarō who has a refined bearing arrives. Genzō takes the terrible decision to kill him in place of his lord's son.

This play describes events that took place at the same time as the revenge of the forty-seven loyal retainers that was made famous by the play "Chūshingura". Lord Matsuura is disgusted because the loyal retainers do not seem to be interested in avenging the death of their lord. Moreover, he learns from a haiku teacher that Ōtaka Gengo, one of the retainers, is forgetting his loyalty toward his former lord, which makes Lord Matsuura furious. However, then his haiku teacher shows him the poem that Ōtaka Gengo had left. As Lord Matsuura is thinking over the meaning of the poem, the sound of the drum is heard in the distance, signalling that the attack has begun. Finally, Ōtaka Gengo comes to Lord Matsuura's mansion to report the success of the revenge.

[ 'Extracts of Plays featuring the Successful Roles of Nakamura Kichiemon II' in 'The Courtesan Yatsuhashi and Sano Jirozaemon', 'The Suzugamori Execution Ground', 'Kumagai's Battle Camp' and 'Danmari on the Tidal Beach of Harima' ]

This is a play woven together from several of Nakamura Kichiemon II's most successful roles: Sano Jirozaemon in 'The Courtesan Yatsuhashi and Sano Jirozaemon', in which a courtesans' parade in the Yoshiwara Pleasure Quarters where cherry blossoms are in full bloom is truly spectacular, Banzui'in Chōbē in 'The Suzugamori Execution Ground', a stylized masterpiece by Tsuruya Nanboku, as well as Kumagai Naozane in the tragic history play 'Kumagai's Battle Camp' in which the theme of transience in a world torn apart by war is very moving. Lastly, members of the Genji and Heike military clans appear at the tidal beach of Harima, fighting over the red flag of a swallowtail butterfly in 'Danmari on the Tidal Beach of Harima'.

[ 'The Ichiriki Teahouse in Gion' from 'The Treasury of Loyal Retainers' ]

'Chūshingura' is one of the most popular plays in the repertoire. It is adapted from a historical incident in which forty-seven masterless samurai avenged the death of their lord, Asano Takuminokami (in this play, called En'ya Hangan) by killing his enemy. Yuranosuke spends his days and nights in the Pleasure Quarters of Kyōto in an effort to make their lord's enemy believe he has given up any thought of a vendetta. One night, he notices Okaru, a courtesan at the Ichiriki Teahouse, reading a secret letter that was sent to Yuranosuke, and which indicates his true intentions, so he thinks he must kill her. However, she is related to the En'ya household....

Sasaki Moritsuna has arrived in Bizen Province as the new lord after the war between the Genji and the Heike clan. A year ago, he had heartlessly killed a fisherman who told him where he could get across the shoal to the enemy's camp. The fisherman's mother Fujinami appears and demands in tears that Moritsuna give her son back to her. Moritsuna apologizes sincerely for his unjust action and holds a memorial service for her son to appease his spirit. However, the spirit's grudge turns it into an evil dragon, which shows up in front of Moritsuna.