October Program at the Other Theatres||KABUKI WEB 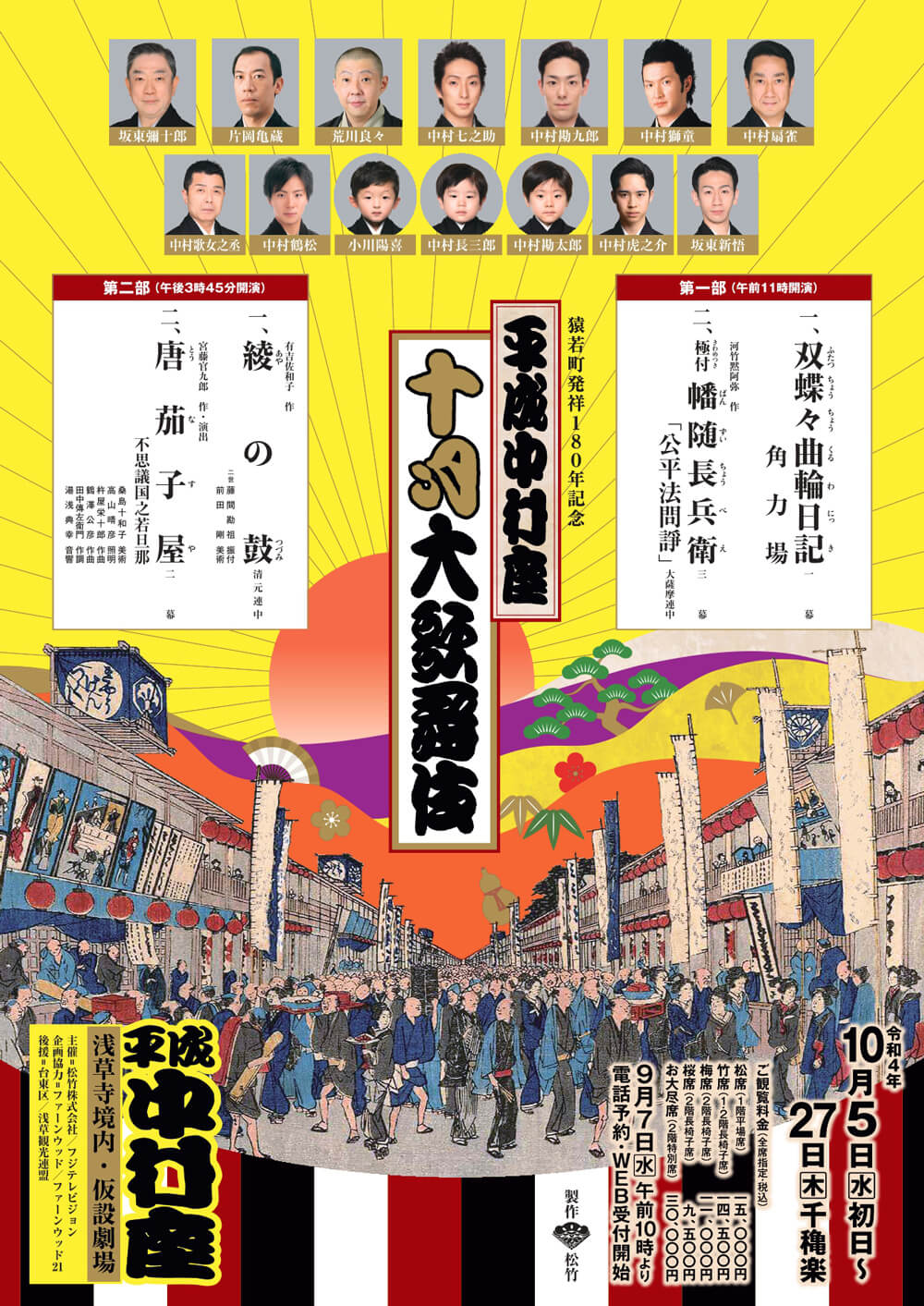 *No performances on the 11th (Tue) and 20th (Thu).
*The theatre will open 45 minutes before the performance starts.

*Children over the age of 4 must purchase tickets to enter.
*In the 'Matsu' seats you will be seated on the floor with 'zabuton' cushions. There are special seats for the Odaijin seats, and benches for all other areas.
*Customers with tickets for consecutive parts are asked to leave the theatre once the previous part has ended.

Access to the theatre (Temporary theatre in the Sensō-ji Temple)

Heisei Nakamuraza is a theatre troupe that performs in a specially constructed theatre building, which itself is built in the style of a playhouse from the Edo period. The productions started by Nakamura Kanzaburō XVIII and others, began in 2000 in Asakusa in Tokyo, and the performances have since taken place in Osaka, Nagoya, New York and so on. This autumn, the Heisei Nakamuraza returns to Asakusa for performances that will be held for the first time in three years. Enjoy the program of various plays, such as a masterpiece of the history play genre, a brand new kabuki production and so on!

The title 'Futatsu Chōchō' means 'two butterflies', and this reflects the fact that the names of the two sumō wrestlers who play important roles in the play both begin with "chō": Chōkichi and Chōgorō. Nuregami Chōgorō throws a match in the hopes that the younger wrestler Hanaregoma Chōkichi will persuade his patron Gōzaemon to give up the beautiful courtesan, Azuma. This is because Yogorō, Chōgorō's patron, and Azuma love each other, and Yogorō wants to redeem her from her contract. However, Chōkichi loses his temper at the fact that Chōgorō purposely lost the fight and the two begin quarreling, performing a series of magnificent mie poses as they compete in a test of pride.

In the early Edo period, gallant men like Banzui'in Chōbē were leaders among the ordinary townspeople. But this incurred the wrath of members of the samurai class who were theoretically in control. As the play begins, a fight breaks out inside a theatre which is settled by Chōbē, but Chōbē's skillful arbitration frustrates the samurai Mizuno. A short time later, Mizuno invites Chōbē to visit his mansion. All of Chōbē's men tell him not to go because it is a trap, but Chōbē decides to meet his end and bids farewell to his wife and son.

This is a dance drama by Ariyoshi Sawako which will be performed for the first time in 35 years. It dramatically portrays the relationship between Saburōji and the woman he loves, Hanahime who merely toys with him, as well as that between Saburōji and Akishino who watches over him.

This is a brand new kabuki play written and directed by Kudō Kankurō. It is based on the Rakugo story "Tōnasuya Seidan" which is set in Asakusa. Disowned by his father for visiting the Yoshiwara pleasure quarters too often, the young master Tokusaburō is about to throw himself off the Azumabashi Bridge into the Sumida River... Enjoy this humane comedy based on a chic and sentimental story, interwoven with elements of "Alice's Adventures in Wonderland".