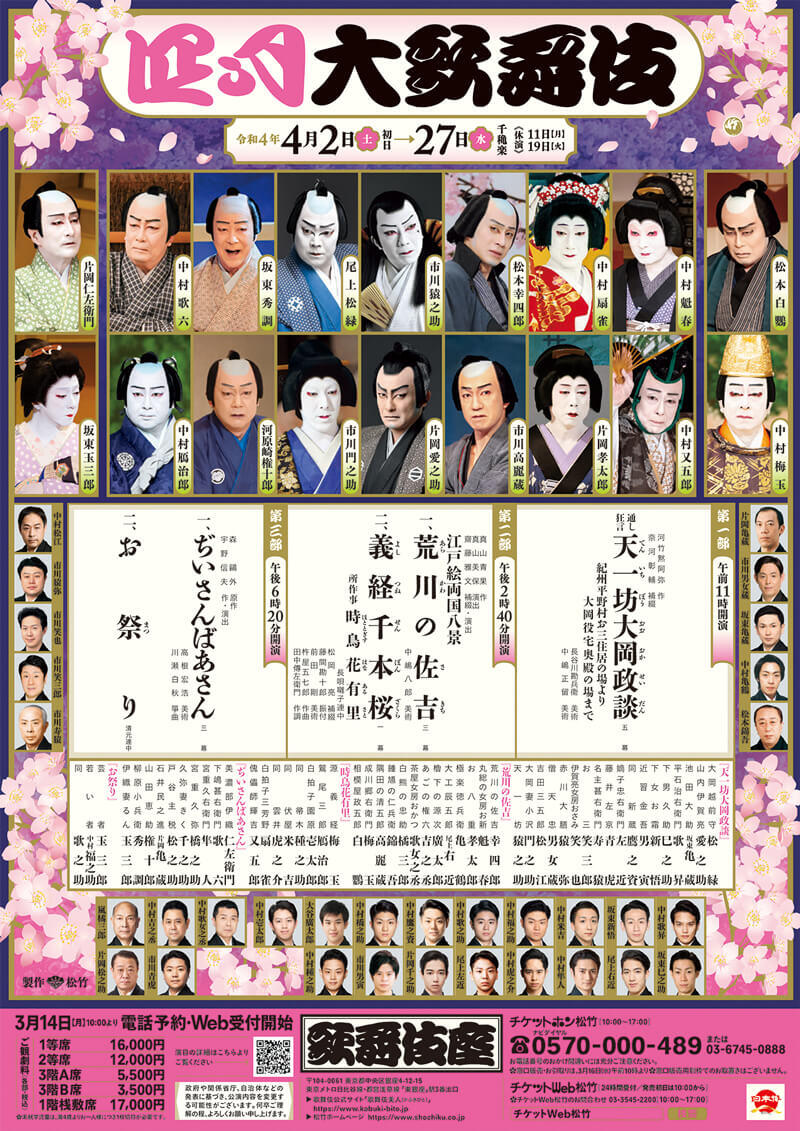 April Program at the Kabukiza Theatre

*No performances on the 11th (Mon) and the 19th (Tue).
*The theatre will open 40 minutes before the performance starts.

In Part 1, a thrilling play will be performed adapted from a 'kōdan' (traditional Japanese story-telling) that is based on the real historical event known as 'The Ten'ichibō Incident.'
In Part 2, you can see a play set in the world of gangsters, portraying a man's sympathetic emotions and way of living, plus a flowery dance featuring masks that are exchanged one after another.
In Part 3, you can enjoy a heart-warming story of a happily-married couple, as well as the chic dance of a geisha depicting a grand festival in Edo (the old name for Tokyo).

Tales of wise magistrates are common in the Far East, and while China has Judge Dee, Japan has Ōoka, Lord of Echizen. In the late 19th century, the success of such stories in the form of 'Kōdan' inspired kabuki adaptations, including this one, written by Kawatake Mokuami.
In remote Wakayama Prefecture there lives an old wet nurse. Her daughter fell in love with the shōgun Yoshimune and bore his child. The mother and child soon died, but the old wet nurse still possesses a sword and a document signed by the shōgun. An evil priest learns her secret, kills her and takes the sword and document. He goes to Edo and poses as the son of Yoshimune under the name Ten'ichibō. He gathers an army of masterless samurai and collects money from supporters, all eager for advantage when Ten'ichibō becomes shōgun. Ten'ichibō's plot seems unstoppable until he meets the wise magistrate Ōoka, Lord of Echizen.

It is the mid-19th century in Edo (old Tokyo). Though Sakichi is a carpenter, he adores the world of gangsters and becomes a henchman of Shōki no Nihē whose territory is the Ryōgoku district. Though Nihē is successful, he is cut in the arm by a masterless samurai named Narikawa Gōemon. He falls on hard times and lives with his daughter Oyae in a tenement. Sakichi, surprised to see him ruined, decides to look after them. Oyae's sister Oshin has borne a blind baby called Unokichi, and Nihē leaves him in Sakichi's care as he goes out to a gambling house. There, after playing with doctored dice, he is killed. Seven years pass by and Unokichi has grown into a healthy and wise boy. Sakichi avenges his dead boss by killing Narikawa who took over the Ryōgoku district as his territory. However, though he takes over from Nihē and becomes a dignified boss, he prefers being a wanderer to having many henchmen. He returns Unokichi to his real mother Oshin and leaves Edo.

Minamoto no Yoshitsune and his retainers are on their way from Daimotsu Bay to Mt. Yoshino, and rest here along the road to Yamato Province. A shirabyōshi court dancer and a puppet player pass by. Each dances in a lively manner and comforts Yoshitsune. This is a lively dance accompanied by the nagauta lyrical ensemble.

The gallant commoners of Edo's neighborhoods loved nothing better than a festival, and this performance is a dance based on one of the biggest festivals in Edo (the old name for Tokyo). In this dance, a geisha appears on stage with a group of young men in a display of their 'Edo-style' spirit. The geisha, who has become a little tipsy, performs a beautiful and enticing dance, and caught up in her performance, the young festival goers put on a brilliant display as they all dance together.