May Program at the Kabukiza Theatre||KABUKI WEB 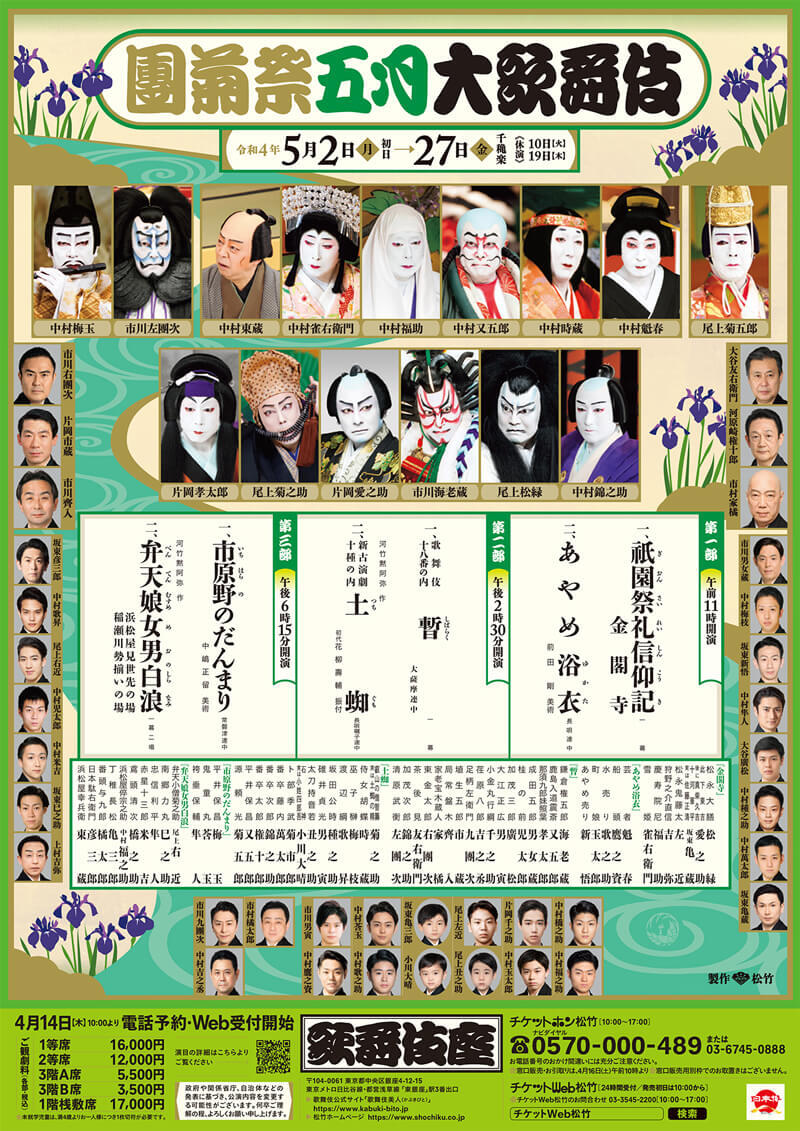 May Program at the Kabukiza Theatre

The May Program at the Kabukiza will be performed in honor of Ichikawa Danjūrō IX and Onoe Kikugorō V for the first time in 3 years. Actors who have inherited their art will play their most successful roles. In Part 1, you can see a gorgeous history play filled with stylized beauty, as well as a cheerful, refined dance. In Part 2, one of the ‘Eighteen Favourite Kabuki Plays’ that are associated with the Danjūrō line of actors will be performed, as well as a dance drama based on a Nō play that is considered a masterpiece. It is included in the Kikugorō family’s favourite works, a collection called ‘Shinko Engeki Jisshu’. In Part 3, you can enjoy a dance displaying a unique kabuki acting style, plus a popular play which is famous for its speeches delivered in rhythmic seven-five meter.

['The Golden Pavilion' from 'The Gion Festival Chronicle of Faith']

This is a 'jidaimono', a history play portraying the life of warriors in the 16th century. Matsunaga Daizen has defeated the shōgun and has set up base in the Golden Pavilion. The beautiful Yukihime is being held prisoner there by Daizen. The brilliant strategist Hisayoshi, disguised as a disgruntled retainer named Tōkichi, pretends to enter Daizen's employ to try to sabotage his plans from within. In a famous highlight of the play, Yukihime is bound to a cherry tree, but when she draws a mouse in the tree's petals, the mouse miraculously comes to life and chews the ropes that bind her. The role of Yukihime is considered to be one of the most difficult 'princess' roles in kabuki.

['Cotton Kimono with a Pattern of Irises']

It is around the time of the Boy's Festival when irises bloom. A geisha, along with some young men and women, portray in dance the cool light breeze in early summer and the romance between men and women. This is a chic dance in which the performers wear a joyful, fresh costume design of irises, which illustrates playing at a river, a common feature in early summer.

More ceremony than play, 'Shibaraku' is one of the oldest pieces in kabuki. Just as the evil villain, Takehira, is about to execute a group of loyal retainers, a voice calls out for him to wait and the hero Kamakura Gongorō appears to save the day. He enters on the 'hanamichi' runway and introduces himself in a tongue-twisting speech full of word play. The villain tries to get rid of him, but no one can match him. Gongorō reveals Takehira's wrongdoing, and beheads the villain's minions. Finally, he departs along the 'hanamichi' runway in an impressive way that demonstrates his great strength. This play features the bombastic 'aragoto' style of acting and preserves the leisurely, comic style of the earliest period of kabuki.

Priest Chichū from the temple on Mt. Hiei,
in reality, the spirit of the spider

This dance drama was adapted from a play in the classical Nō repertoire. In legend, the samurai lord Minamoto no Raikō is famous for destroying demons. In this work, Raikō is ill in bed. Distinguished priests visit him to pray for his recovery but they do no good. Then, another priest appears mysteriously at night also claiming to pray for his health. However, suspicious of the strange shadow the priest casts, Raikō cuts at him with his heirloom sword named 'Hizamaru'. The priest turns out to be the spirit of the Great Earth Spider that has the ambition to rule the country. In the end, the spider's plan to kill Raikō is thwarted and it is defeated by his retainers in an exciting fight.

['Search in the Dark on Ichiharano Moor']

A 'Danmari' is a special scene in kabuki that shows people groping in the dark for a treasure or a banner. In this play, the 'danmari' takes place in the vast wilderness in the suburbs of Kyoto, named Ichihara. Hirai Yasumasa, one of the 4 strong retainers of Minamoto no Raikō starts playing a bamboo flute. Then Hakamadare Yasusuke and Kidōmaru, bandits causing havoc in Kyoto, appear and Yasumasa takes flight from danger by groping his way through the pitch darkness.

A beautiful woman is suspected of shoplifting and is beaten. When it is proved that she was not stealing, her servant demands compensation. However, a samurai who happens to be present uncovers her ruse and reveals that the woman is actually a man. The former 'woman' and her accomplice are, in fact, Benten Kozō and Nangō Rikimaru, two members of the same infamous gang of thieves. Even the samurai who supposedly exposed their plot turns out to be none other than Nippon Daemon, the head of this gang. Finally, the gang is hunted down by officers and when they are surrounded, the five gang members remain defiant, delivering elaborate rhythmic speeches dressed in their finest kimono and accompanied by beautiful music.