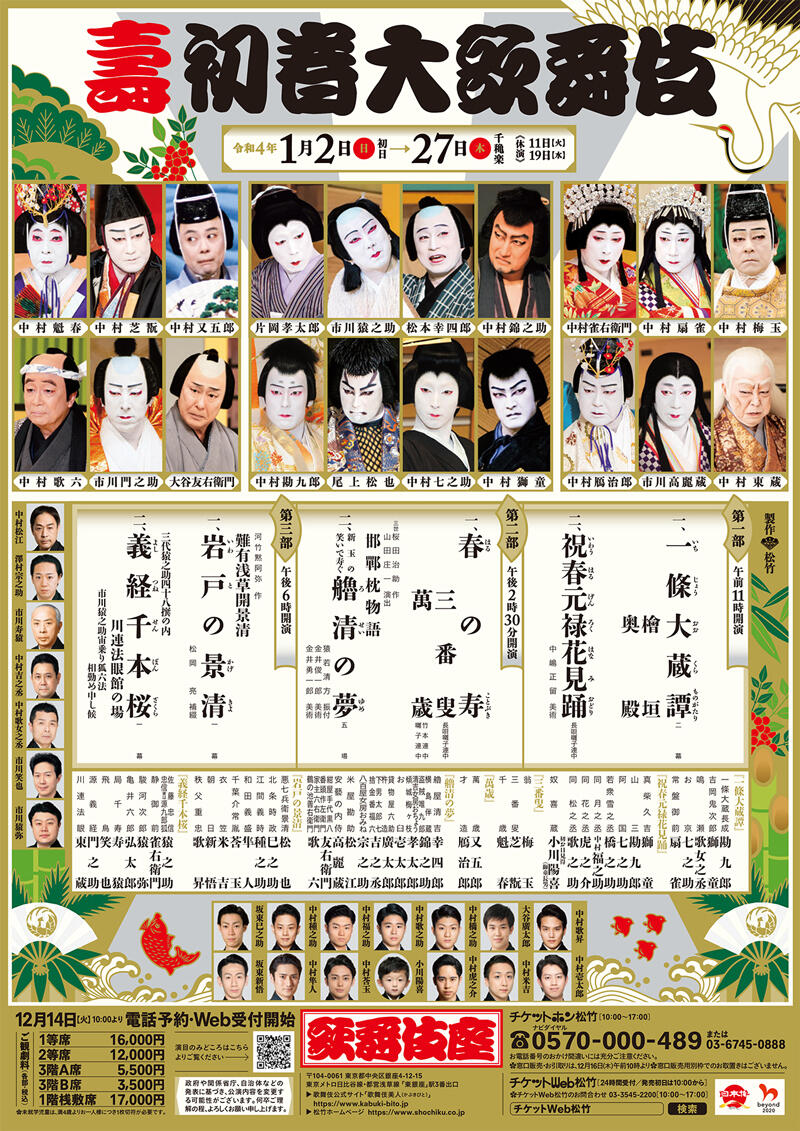 *No performances on the 11th (Tue) and the 19th (Wed).
*The theatre will open 40 minutes before the performance starts.

We welcome you to the Kabukiza Theatre in January with gorgeous New Year decorations. In Part 1, you can see a masterpiece of the history play genre accompanied by Gidayū music, in which an aristocrat conceals his true feelings by playing a fool. This is followed by a flowery dance performed against the backdrop of cherry blossoms in full bloom. As part of the program, an actor's young son will make his first appearance on stage in a special ceremony that is unique to kabuki. In Part 2, please enjoy two dances celebrating the beginning of spring that are perfect for the New Year, together with a humorous play in which we see the dream of an oar maker unfold before us. In Part 3, a play with a stylized pantomime called 'danmari' that is unique to kabuki is performed by young stars, followed by a popular scene from a play portraying the love between fox parents and child that includes a 'chūnori', flight through the air.

This is a 'jidaimono' history play set in the 12th century. The Genji retainer Kijirō and his wife Okyō believe that Lady Tokiwa, the widow of the Genji leader Yoshitomo, has given up on her clan's struggle against the enemy Heike. However, when they spy on her they rejoice to find that she secretly prays for the Heike's downfall. Yatsurugi Kageyu, one of the retainers of her current husband, the aristocrat Ōkura, discovers this. When he declares that he will tell Kiyomori about Lady Tokiwa's secret, he is killed by Ōkura. Though Ōkura seems to be nothing more than a fool, this is actually an elaborate disguise to survive in this turbulent world.

['A Dance of Cherry Blossom Viewing in the Genroku Period']

This dance is set in the Genroku Period (1688-1704). A party dressed in gorgeous apparel comes to view the cherry blossoms in full bloom. The light of the moon shines upon the flowers, and the people perform elegant dances as they admire the cherry blossoms and rejoice together. This month's performance is a lively celebration of the stage debut of Nakamura Shidō's son Ogawa Haruki.

Two dances celebrating the beginning of spring will be performed.
＜Sanbasō＞
This is an auspicious dance based on the ritual play 'Okina' in the classical Nō Theatre. The old man Okina and the young performer Senzai dance praying for world peace and national tranquility, before the energetic Sanbasō dances for a bountiful harvest of grain.
＜Manzai＞
Manzai entertainers perform a lively dance in the streets as they pray for business prosperity.

The oar maker Seikichi and his wife Ochō are in debt, and have moved to Ueno Ikenohata in Edo (the old name for Tokyo). Hearing their circumstances, the landlord Rokuemon comes up with a plan to trick a samurai into a compromising situation with Ochō and then to blackmail him. Soon afterwards, Yokoshima Banzō arrives and falls victim to their scheme. Later, Seikichi takes a nap, resting his head on the luggage left behind, and ...

Akushichibyōe Kagekiyo, a valiant warrior of the Heike clan who burns with the desire to wreak vengeance on his arch enemies, the rival Genji clan, secludes himself in a rock cave at Enoshima. He curses Minamoto no Yoritomo, the head of the Genji clan, and as a result the world becomes dark. Then, daimyō lords allied to the Genji clan, Chichibu no Shigetada, Hōjō Tokimasa and others, gather in front of the rock cave and begin a Shintō ritual to dispel the darkness. In time, Kagekiyo appears and …