History of the Kabukiza Theatre

Since it was first built in 1889 on land in the Kobikichō district, the Kabukiza Theatre has continuously staged not only the most refined of classics, but also new kabuki productions reflecting each new epoch.
Over the years, the theatre has suffered from several catastrophes, but each time it has managed to renew itself in a strong and vigorous way. It can be said that the history of the Kabukiza Theatre is the history of modern Japanese drama.
The present Kabukiza Theatre (the fifth reconstruction) opened in April 2013, and even today it remains a lively cultural spot that welcomes many kabuki fans and tourists. 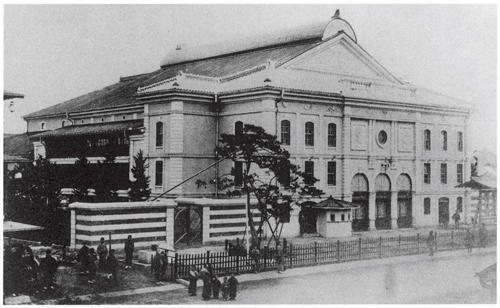 The first Kabukiza Theatre (the building's first phase) embodied the ideals of theatre reform that were so important to men such as the journalist Fukuchi Genichirō, who first opened the theatre on November 21st, 1889.
The theatre exterior was Western in appearance but the interior was constructed of cypress in the traditional Japanese style. The Kabukiza was named after the genre of theatre that it staged, but before this time theatres had either incorporated the family names of their founders, such as the Ichimuraza Theatre, or else were named after the area in which they were built, such as the Shintomiza Theatre. By naming this the 'Kabukiza', it created the impression of great innovation for the people.
Also at this time, the three most popular actors of the day, Danjūrō Ⅸ, KikugorōⅤand Sadanji I (collectively known as 'Dan-Kiku-Sa'), appeared together on the Kabukiza stage from where they led the kabuki world. 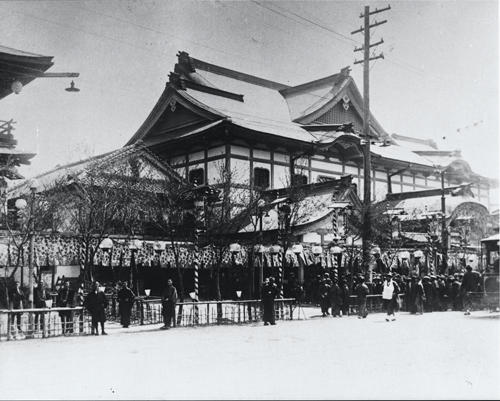 In 1911, the Kabukiza was reconstructed in the purely Japanese palatial style, marking the birth of the theatre's second phase. In 1914, the Shochiku joint corporation (later Shochiku co., ltd.) took over the management of the Kabukiza Theatre in its entirety, but due to an electrical fault the building burned down in October, 1921. 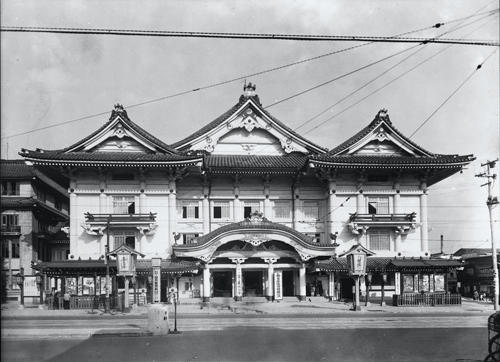 As the theatre was being rebuilt, the Great Kantō Earthquake struck on September 1st, 1923 and all construction work was suspended. After an interruption of three years, the Kabukiza's third phase began in January, 1925 when it reopened as a large palatial-style building constructed in a combination of Nara Period (8th century) and Momoyama Period (16th century) styles.
Moving on to the Shōwa Era (20th century), the Kabukiza Theatre went on to enjoy a Golden Age with legendary actors such as Ichimura Uzaemon XV, Onoe Kikugorō VI, and Nakamura Kichiemon I. However, in May in 1945, it was destroyed by the great Tokyo air raid. 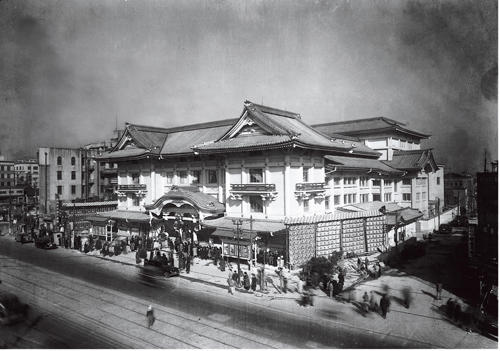 Most of the theatre was lost in the Tokyo air raids, but after the war parts of the foundation, side walls and roof that had escaped destruction underwent repair. This was a period in which materials were in short supply. However, while maintaining the design of the third phase, the fourth phase of the Kabukiza Theatre incorporated brand-new facilities and reopened its doors in January, 1951.
In the postwar recovery period during which society's sense of values changed dramatically, kabuki faced a time of great difficulty. Yet despite this situation, the Kabukiza Theatre continued to stage many wonderful theatrical productions. Judging by the high praise received for its special 'name succession' performances and its overseas productions, kabuki had overcome the challenges of the past and now entered an age of great prosperity.
In April 2010, after that month's performances had finished, the Kabukiza Theatre closed for renovation.

The Fifth Phase of the Kabukiza Theatre
(April 2013~) 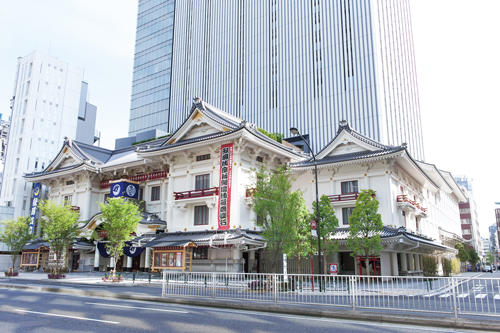 Retaining the distinctive characteristics of the fourth phase building such as the tiled roof, the 'karaha-fu' (undulating gable) and the balustrade, the new Kabukiza Theatre inherits the history and the visual setting of its forebear with its strong cultural presence. At the same time, it has introduced a variety of functions such as new facilities for the disabled. It has made improvements in earthquake resistance and has taken environmental measures such as 'Greening'. At the back of the Kabukiza Theatre is an office skyscraper (the Kabukiza Tower) that incorporates a sophisticated design using lattice motifs from traditional Japanese architecture. The building is a handsome addition to the townscape of the Ginza district with which it is in perfect harmony. With its fusion of tradition and creativity, it is now a theatre truly worthy of a new era. 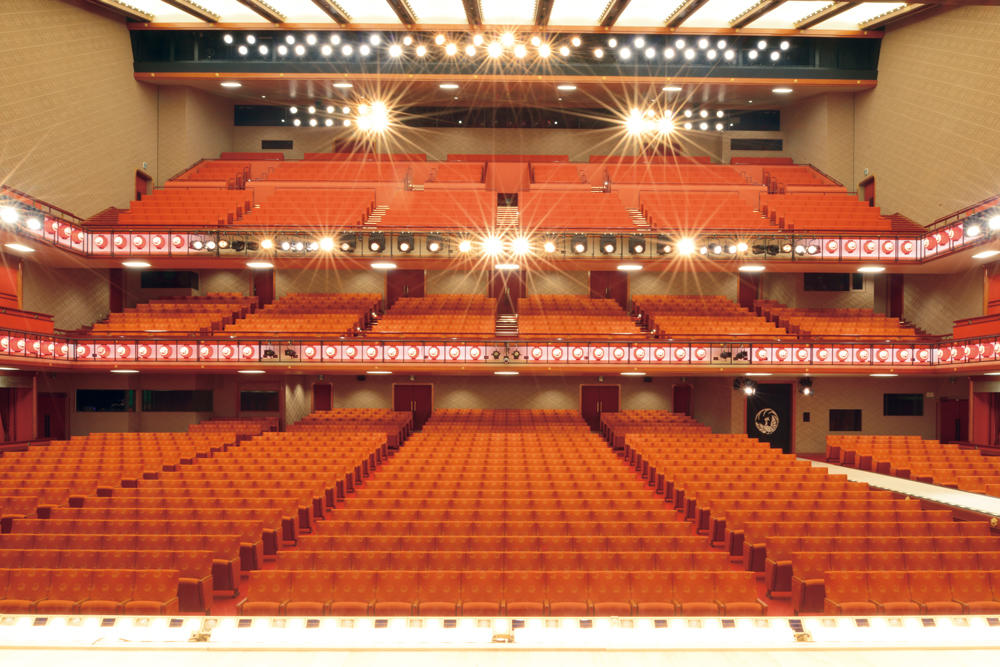 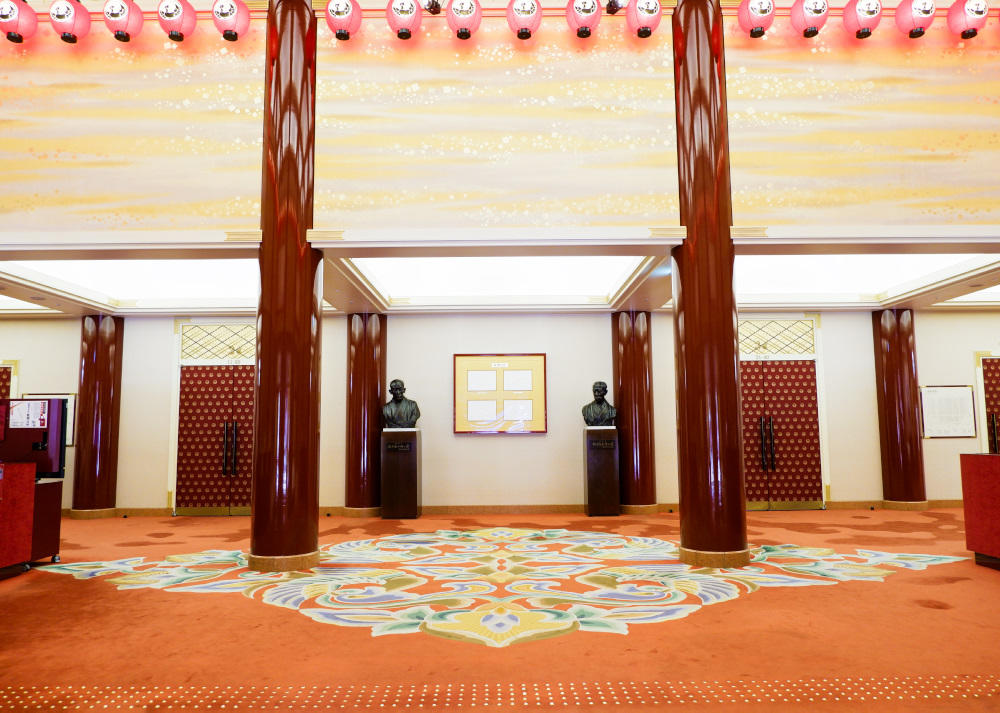 As the only theatre in the world solely dedicated to kabuki, the new Kabukiza, just as its predecessor had done, has created a theatrical space in which it is easy to see and hear. The width of the stage is also the same as before so that kabuki's picture-like beauty can be enjoyed to the full.
The image of the fondly-remembered main lobby has also stayed the same. The scarlet carpet and its design have been duplicated from the one ordered for the opening of the fourth phase reconstruction.
Along the corridor on each floor are masterpieces of painting on display. Art appreciation during the intermissions is another way to enjoy your visit to the theatre.